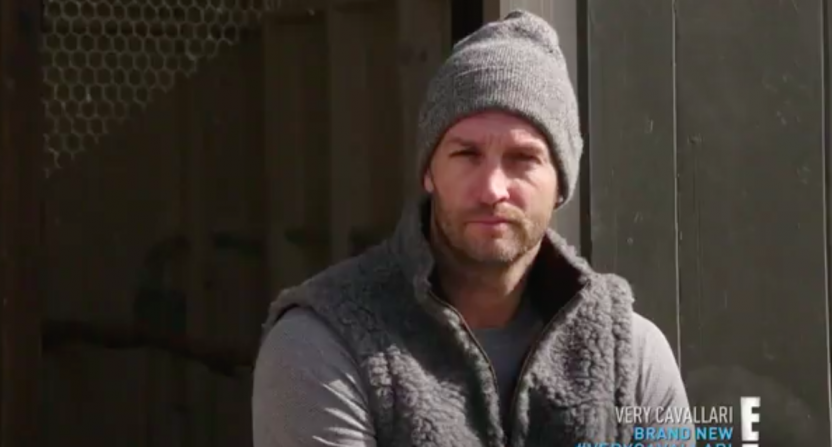 Shannon may be cancelled, but our coverage of Very Cavallari continues this week with Episode 2, Shake Your Palm Palms. New episodes air on Sundays at 10pm EST on E!

In this episode, Kristin travels for work, Brittainy wrestles with some seemingly-easy-to-correct operational issues, and Jay does Jay things, like donating the family goat to Luke Bryan and discussing hen vaginas with his idiot friend Chuy.

Kristin and Kelly head to California for an Uncommon James photoshoot. After flying to LA, they road trip to Palm Springs, where they discuss totally normal topics like who spits/swallows and, a real crowd pleaser: colonics. Most people play the license plate game on long car rides, but Kristin isn’t most people.

In an even more disgusting turn of events, Kristin volunteers that she and Jay once sat through each others colonics, and honestly that’s just the shittiest idea for a date I’ve ever heard.  She jokes, “We broke up moments later” before reminiscing “then he proposed.” And I have questions, not the least of which is “How long after shooting a fire hose through your poop chute did Jay propose?”

During the trip, we see Pip (Kristin’s Australian friend from Season 1, now pregnant via surrogate with twins), Jack (Kristin’s publicist), and Biegs (another friend whom Kristin is trying to make her VP).  They were thirsty to give Kelly dating advice, which ended in a big ol’ cry-fest. We also learn that Kelly called off an engagement to one of Jay’s Vanderbilt teammates 3 months before their wedding because he was cheating, and all that did was remind me that JAY CUTLER GOT INTO VANDERBILT.

In another attempt to fill the void left by Shannon, the show introduced a new character, Colby, head of customer service who purports to have been with Uncommon James since Day 1. I was ready to dispute this fact until they provided evidence of Colby’s presence in the background of half a dozen scenes, like she’s the fucking M. Night Shyamalan of Season 1.

But the real issue with the store isn’t Colby’s suspect promotion from an extra to head of customer service, it’s the fact that the clowns in shipping keep sending out empty boxes and Brittainy is about to loooooose it, so much so, that she interrupts boyfriend/resident cretin Jon Stone’s recording session to bitch about the mishap.

This conversation cost like $500 in recording time, so I hope Jon’s sage advice of “Have a plan” was worth it.

Jon’s non-advice aside, let’s pause for a second to try and comprehend how 10+ packages per week were delivered with no contents. Like how? Brittainy is incensed and rants at shipping managers Kelsey and Matt for several minutes when the overarching message was basically just “Put the shit in the boxes.”

THIS ENTIRE MEETING COULD HAVE BEEN AN EMAIL!!! pic.twitter.com/GABxBbnvcA

In addition to gaining a new character, we saw another old friend, my all-time favorite: Jay’s big idiot friend Chuy. You may remember him from Season 1, where he imparted this piece of wisdom to the masses: vasectomy and castration are not the same thing. This time he’s here to discuss hen vaginas and the egg laying process. Seriously, one of the people in this scene clearly has brain damage from being repeatedly hit in the head and the other played 10+ years in the NFL.

Just imagine for a second being the person JAY CUTLER thinks is a train wreck.

I know we’re still grieving Shannon’s absence, but we also lost another beloved character this week: Pekka the llama. Although it sounded like Caroline Bryan gifted Pekka to Kristin, she was returned this week. Like the Bryans are running a Blockbuster for llamas.

Jay took this opportunity to rid his house of another annoyance. No, not Kristin nor any of the three jam eaters. The victim was Pepper the goat, whom he recklessly stuffed in the back of Luke Bryan’s trailer. And there’s a sentence I never thought I’d type.

Stock Up: Chuy
With Shannon gone, we desperately need Chuy as a series regular. I’ll start the change.org petition.

Stock Down: Kelly
It’s been 10 episodes and I still don’t understand why Kelly is on this show. She isn’t related to Uncommon James and her storylines could not be less compelling.