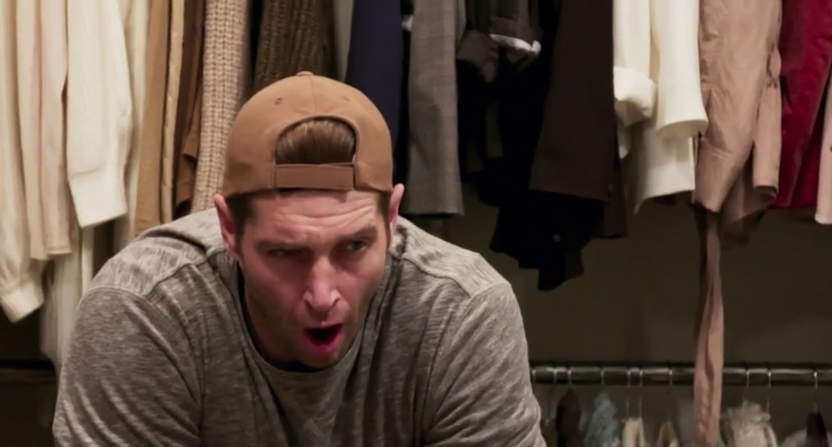 It’s Monday, which means that I’m back to rid you of all those pesky extra IQ points you have lying around. The fifth episode of Very Cavallari aired last night, and boy was it a doozy! What it lacked in tears and emotional breakdowns, it made up for in one-liners, things I cannot unhear about, and gratuitous use of the word “extra.” If you’re new to the show, be sure to go back and read last week’s recap.The RecapThis week, Kristin goes to LA to host a pre-show for the Oscars and to showcase her jewelry at an event for bloggers and media personnel. This leaves Brittainy in charge of the store and Jay in charge of the kids and the house. It’s moments like this when I wish the children were on screen, because watching this man take care of three kids would be television gold. (Would he just observe them on CCTV the same way he watches the deer?)Brittainy is feeling overwhelmed with everything on her plate, and vents to Kristin that her musician boyfriend, Jon Stone, isn’t pulling his weight around the house. I don’t see what Brittainy is getting out of this relationship, and frankly they are unbelievable as a couple. Appearance isn’t everything, but Brittainy could be a model and Jon looks like he hasn’t bathed recently. She complains that he expects her to do all of the cooking and cleaning, and, most perplexingly, pack for him. Hey guy, it’s 2018 outside. Stuff your own dirty t-shirts inside of your duffle bag.The picnic scene was particularly perplexing. Did it exist to cast doubt on Shannon and John’s relationship (she confirmed that they are most definitely past the honeymoon phase)? Did the producers want to point out that Wirth’s dad is wealthy (“That’s my dad’s building right there,” he says nonchalantly)? Did they need us to know that Wirth used to play football at Auburn? Or did they simply want to illustrate that Taylor’s boyfriend Mike throws a football as though his arm is attached backwards and also he can’t catch for shit? Luckily Taylor loves him in spite of those things.Jay enjoys an evening with the guys, where they dine on barely cooked steak and discuss totally normal topics like milk production in Nigerian dwarf goats and vasectomies. Jay’s best friend Chuy makes everyone else on this show look like Rhodes Scholars. Among many gems, he wonders (out loud) if he can get food poisoning from an undercooked potato and also clarifies the difference between a vasectomy and castration in case anyone was confused (they weren’t). Bottom line: Chuy needs his own spinoff.While in LA, Kristin visits her director/producer friend Pip. Pip has a larger-than-life personality and a strong Australian (?) accent. And she’s a bit nosey too, because right off the bat she starts grilling Kristin about her sex life. Apparently it’s going well, but I really wish I could unhear this:Back at Uncommon James, the girls are planning an event and Jay stops by to check on them. He walks through the store and drops like three insults, including “I don’t think this is the most efficient operation” which is funny coming from someone who played for the Chicago Bears. Catty Jay is my favorite Jay.Taylor is sick and can’t make it to the Uncommon James photo shoot. She says she’s been throwing up and asks Shannon to bring her some french fries. I immediately assume she’s hungover because french fries are my go-to in that situation. Shannon visits her after work, concerned that Taylor has been sick every morning for four days. Being the helpful friend she is, she shows up with two pregnancy tests and a bottle of red wine. Those items seem at odds, no? Taylor wasn’t pleased, saying she finds it “extremely extra that Shannon comes over with pregnancy tests.” But whaddya, you know? Taylor is PG. She’s shocked, but a little excited. Hopefully the child will not inherit Mike’s throwing motion.Kristin returns from LA. It seems that Jay has managed to keep the three children, himself, and the remaining fish alive. She tells Jay she wants to take her staff on a trip before the store opens. He says something snarky about her leaving again, and she counters by saying, “Remember when you were in Miami for five months?” Referencing his stint with the Dolphins last season. Jay’s hesitation about cost turns out to be unfounded since the gang will stay at Wirth’s beach house and take his private jet.Stock Up: ShannonShannon had some awesome one-liners this week, including, “I’m not doing a trust fall with any of you bitches.”Stock Down: WirthNo one was particularly annoying this week, so I have to pick on Wirth, who spent 90% of his screen time flaunting his family’s wealth.Best Jay MomentFind someone who finds you as interesting as Jay finds Kristin.Did Shannon Cry?She didn’t! I know, I’m as shocked as you are.Episode Grade: A-A character is pregnant and we had some great Shannon moments. A solid episode.