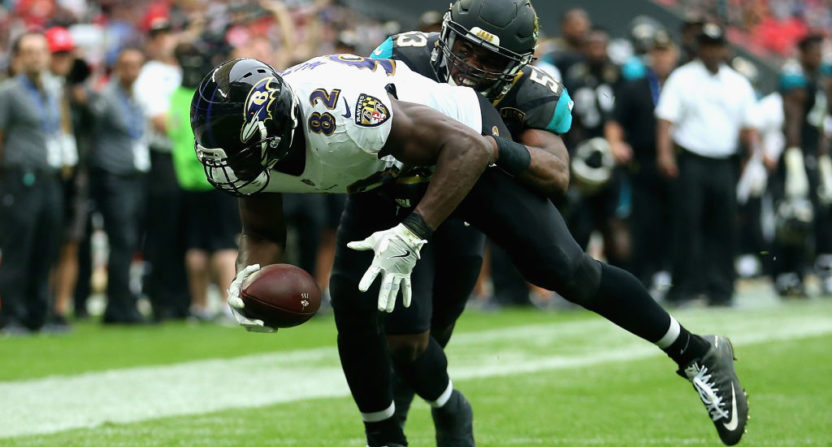 As the NFL looks to the future and live streaming for its games, one could say that online streaming still has a long way to go before it catches up to TV. On Sunday, Verizon used several platforms to maximize the viewership for the Baltimore Ravens-Jacksonville Jaguars game from London, but it didn’t seem to matter to some trying to watch it online. The quality of the stream suffered lags, seemed blurry at times, and in some extreme cases, didn’t show up at all.

Verizon, which won the rights to the game earlier this year, decided to stream the game on AOL, go90, Tumblr, Yahoo Sports, and other sites, as well as on streaming media devices like Amazon Fire, Android TV devices, Apple TV, Chromecast, Roku, and Xbox.

While the game was aired on TV in Baltimore and Jacksonville, Verizon streamed the game around the world in hopes that it could attract a large audience. Instead, it got complaints.

When you sit down for an NFL game, you shouldn't have to worry if the picture will go awry. #nflstream

So why can't I watch the @Jaguars/@Ravens game on my @YahooSports app?? And don't tell me it's because I need an updated version…

The problems didn’t affect everyone, as some found the stream rather seamless, but the exclusive online game still experienced problems. And with Amazon ready to begin its Thursday Night Football streaming this week, the Verizon/Yahoo experience certainly didn’t do it any favors with its difficulties.

While Amazon will have its own safeguards in place to prevent the problems that plagued Verizon/Yahoo on Sunday, people could still be complacent in visiting Amazon Video. The main takeaway from Sunday is that live streaming still has a way to go before reaching critical mass.