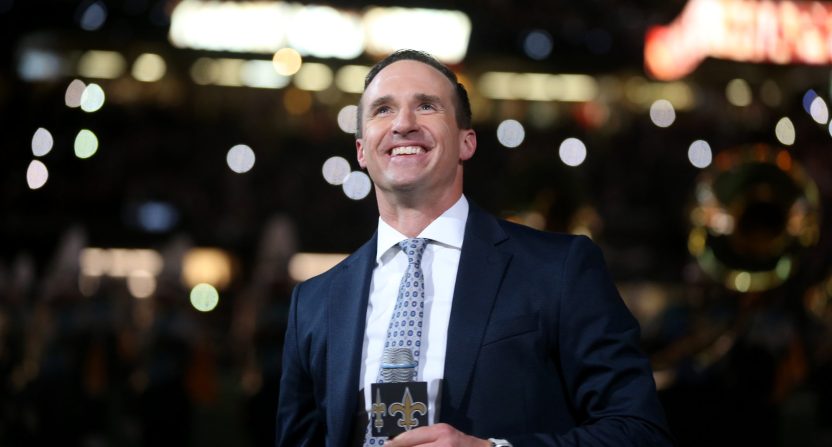 It’s good to be a quarterback. You live a wonderful life while you’re playing, and you live a comfortable life when you’re done. Some prepare themselves diligently for retirement with specific goals in mind. Others are sought after for specific jobs.

Television is a cushy post-career landing spot, and the last two high-profile QBs to take advantage of their opportunities are Tom Brady and Drew Brees. Both have been in the news lately. Last week it was announced that Brady will join Fox Sports as their lead NFL analyst once he retires. Earlier this week, it was revealed that Brees is out at NBC.

The news surrounding these future Hall of Famers raised eyebrows. Brady has already experienced an eventful off-season: retiring, unretiring, and allegedly landing an unprecedented $375 million deal. And then there’s Brees, who has teased that he’s considering coming out of retirement after sitting out last year. He may be kidding. ESPN reported Ed Werder pointed out Brees had shoulder surgery a few weeks ago and wouldn’t be physically able to play until possibly October.

The Brady and Brees news underscores that TV executives need to do a better job when it comes to hiring for broadcasting gigs. Too often the focus is on star quarterbacks who might not be best suited for those jobs. The initial thinking is understandable from a network’s point of view. You want big stars and few athletes are bigger luminaries than elite quarterbacks.

The NFL can often seem like a faceless league because the players are all wearing helmets. We gravitate to the quarterbacks because it’s the most important position in sports. They’re the ones who get the glory, television commercials, and media appearances.

Also, networks want their broadcasting partner, the NFL, to be happy. The league likes having its most marketable players move into those jobs. It’s good for business to see familiar smiling faces on camera.

It’s no accident that being a Dallas Cowboys quarterback is a pipeline to a TV gig: Troy Aikman, Don Meredith, Tony Romo. Heck, Dak Prescott could probably land a network job when he retires. And while Romo has excelled in the role most, star quarterbacks are mediocre at best.

But what executives don’t seem to fully grasp is that great quarterbacks can be bland. It’s not necessarily the fault of QBs. It’s often the nature of the position. Quarterbacks are de facto management positions. They are the face of the franchise. When they talk, they are speaking on behalf of the organization. Therefore they have mastered the art of clichés, often delivering boring soundbites.

Watch most press conferences. See how often quarterbacks avoid saying anything remotely interesting or inflammatory. When he was with the Miami Dolphins, Ryan Tannehill was a guest on The Dan Le Batard Show with Stugotz. Tannehill gave an example of how to handle the media, saying a lot without saying anything.

Le Batard hypothetically asked about a fictitious ‘Team X’ and Tannehill responded by saying: “I know we’re playing a good Team X this week. We had a great week of practice. We worked really hard. … We have a lot of respect for Team X but we’re confident going into the game. I feel like if we play well, we should come out with a win.”

It was a funny radio bit, but this is what you get from most quarterbacks. And that habit is hard to break when they become broadcasters.

Brees and Brady spend decades saying almost nothing interesting. The rare time Brees said something noteworthy was when he made ill-advised comments on “disrespecting the flag” and was forced to apologize. Meanwhile, one of Brady’s most interesting moments occurred when he was accused and suspended for his role in allegedly deflating footballs.

There is plenty of skepticism regarding Brady as a broadcaster. Legendary former Boston Globe sports columnist Bob Ryan said on The Rich Eisen Show: “He certainly doesn’t fit the profile of an entertaining analyst.”

Brady hasn’t even begun and he’s already catching heat. At least with Brees, we have seen his work. Brees was often criticized, especially for a poor performance in NBC’s broadcast of the Las Vegas Raiders–Cincinnati Bengals playoff game. Now, we’re not sure what his immediate future holds.

So what would be better options? Interestingly, one of the bigger sports media stars is a former punter. Pat McAfee hosts a successful weekday show and is reportedly in talks with Amazon for Thursday Night Football. Wide receivers are usually good talkers and Brandon Marshall has his own media company. As far as active players go, why not consider a tag-team of brothers: tight end Travis Kelce and center Jason Kelce?

Now that’s entertainment. Now that should be the future of broadcasting. Networks need to look beyond quarterbacks.