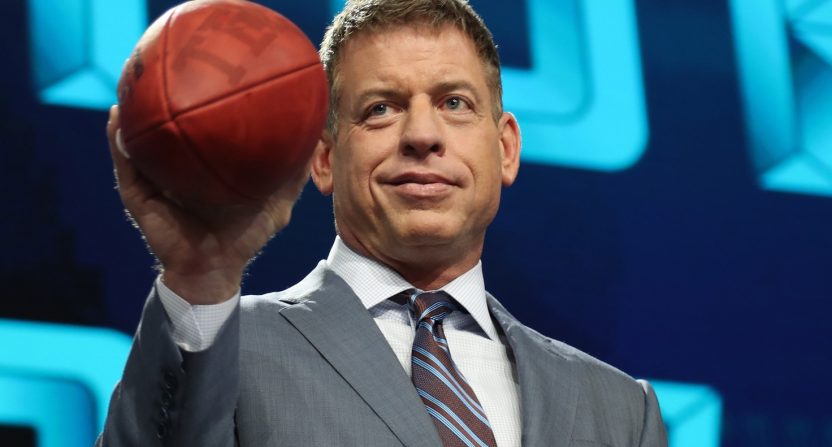 The news last night that Troy Aikman was leaving the FOX booth for ESPN will undoubtedly end up being one of the biggest sports media stories of the year.

It’s not just that Aikman is leaving after decades as the top FOX analyst. That was always a possibility this offseason, and he’d long been rumored as a possible Amazon target.

Had that move come to fruition, though, moving to essentially a startup operation, it would have been a less seismic shift. By going to ESPN, though, Aikman has kicked off a massive broadcasting carousel, and that’s even before considering that ESPN had a Monday Night Football booth in place that feels likely to be disbanded now. (That’s not sourced information, it just feels obvious. You don’t bring in Troy Aikman on a massive deal if you’re not looking for a complete makeover.)

This probably isn’t a comprehensive list of questions this move opens up, and we’ll certainly have more on the effects going forward. But for now, here’s what we want to know.

What happens to the current Monday Night Football crew?

ESPN’s Monday Night Football booth hasn’t truly felt settled since Jon Gruden departed. Steve Levy currently has play-by-play duties alongside Brian Griese and Louis Riddick; Levy does solid work, but in his two years in the role, he hasn’t stood out as a definitive top voice. (Put another way: it’s hard to imagine a scenario where Amazon considered trying to poach Levy to juice up their nascent booth.)

Plus ESPN and ABC are taking on more games per season as part of their renewed NFL deal; it’s possible ESPN looks to keep the current booth intact as a sort of pseudo-#2 booth arrangement. (Currently that role is occupied on a fill-in basis by ESPN’s top college team of Chris Fowler and Kirk Herbstreit.) But it looks like we’re headed for a full MNF turnover once again.

Who does ESPN pair with Aikman?

Al Michaels is, of course, a free agent, and while Amazon rumors have been loudest for Michaels, he’d also wanted to work with Aikman. He could still do that, it would just be at ESPN. As we saw during the Super Bowl, Michaels can still get the job done well, while bringing unmatchable gravitas to the role. Michaels could still end up at Amazon, but Aikman’s move might lead to Amazon having to pay more to put Michaels on Thursdays.

If not Michaels, then, who? Andrew Marchand’s report in the New York Post floated one interesting option: Aikman’s most recent partner. Joe Buck has one year of his deal remaining, which isn’t the same as being a free agent, but it’s not insurmountable if he wanted to leave. Buck also calls the World Series, so any exit would create another big hole to fill at his current employer. But it’s not impossible.

What do these changes mean for the ManningCast?

Nothing at all. It’s here to stay, on a new deal. But as a sports media site, we’re obligated to mention the ManningCast as often as possible for traffic purposes.

Assuming Buck stays put, it still leaves an opening for a new #1 analyst. Greg Olsen is the obvious candidate, having spent this past season in the booth with Kevin Burkhardt (and doing very good work, aside from sitting on the occasional cough button.)

It feels more likely that FOX keeps it in-house; unlike NBC and ESPN, FOX and CBS have a deeper roster of NFL broadcasting talent to choose from. Brees has also not been the surefire Collinsworth usurper many pegged him to be upon his retirement. (Though that speculation was at the peak of Romo-mania.) There is one external candidate who could be too attractive a target to pass up, but he’s also part of the speculation for the next question.

What does Amazon do now?

Until yesterday, it seemed like if Aikman was going to leave, it was probably for Amazon to work with Al Michaels. Amazon probably figured that too, and now there’s a chance that they miss out on both of their top targets. Considering their desire to bring in big-name broadcasting talent to help establish legitimacy as they take over Thursday night, this is a bit of a blow, especially if Michaels follows Aikman to ESPN.

There are still possibilities out there, of course, and one name keeps popping up in broadcasting rumors: Rams coach Sean McVay. There’s zero question that bringing the reigning Super Bowl champion head coach into a booth would draw massive interest, and McVay’s age and background at the forefront of modern NFL offense makes him very appealing. But he’s never worked in broadcasting, and there’s also the fact that he’d now have to step away from a possible Super Bowl dynasty chase with a loaded roster and a solid veteran quarterback in place.

It’s not impossible, but it’s still really hard to see that happening.

There’s also another NFL head coach who has actually retired this offseason: Sean Payton. He could make sense at FOX, but it feels more like the splashy name that could appeal to Amazon, and they’re going to be more motivated (and with deeper pockets) to try and add someone with name recognition. Amazon is the toughest situation to gauge, because we just really don’t know yet what their philosophy is. But they have the money to be a player.

Is Tom Brady really a possible candidate for any of these openings?

Brady’s name has come up because of course it has, but at this point, it’s really hard to imagine he’s a real candidate anywhere. From the outside, if Brady wanted to spend Sundays (or Thursdays or Mondays) in an NFL stadium, he’d probably still be playing. Money talks, yes, but Brady has plenty of that already. If he signals that he wants in anywhere, though, he could probably name his price.

That’s just a preliminary roundup, but it’s really hard to overstate just how much impact Aikman’s move has on the world of sports broadcasting. There are going to be many ripple effects to monitor, that could even have an impact on prime properties of other sports. Expect things to get really, really interesting in the coming weeks and months.