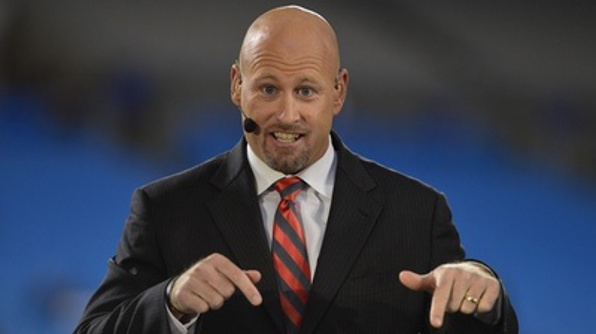 It’s pretty rare to see fellow ESPN colleagues call one another out in any public space, but that’s what has happened over the last week as NFL reporter Adam Schefter and analyst Trent Dilfer have had a strange back-and-forth play out on Boston radio.

Schefter was found having to defend himself against an accusation by Dilfer that he was being used by the Patriots organization to bump up the trade value of backup quarterback Jimmy Garappolo.

It all started last week when Schefter went on WEEI’s Kirk & Callahan to talk about whether or not the Patriots would try to get something out of their highly-touted backup to Tom Brady. Schefter said that he didn’t see the Patriots demanding anything less than the Vikings gave to the Eagles for Sam Bradford, a 1st and a 4th round draft pick. Here’s the quote via WEEI:

“In my mind, Sam Bradford went for a 1 and a 4 [round pick], so to me that is the starting point and I don’t even know if they would do it then,” he said.

That quote was more of Schefter’s personal opinion, not necessarily a report that it was exactly what the Patriots were demanding. Later in the day on the same station, Trent Dilfer went on WEEI’s Dale & Holley and brashly stated that the Patriots organization was just using Schefter to make a story and set the market value high for Garappolo.

“I can promise you nobody is trading a first and a fourth for Jimmy,” he said. “Now, it’s smart that the brass in New England is using Adam [Schefter] to get that headline out there because now they are starting the market there. Now to negotiate from that point, that is a good point to negotiate from. There’s only a handful of players in the league you would trade a first and a fourth for.

“I’ve always thought Jimmy would maybe be a late first and a conditional. I think it’s more a second and third combination where you can get two really good players. The only caveat to that is people are valuing first-round picks less and less these days. You’re starting to see where the height, weight, speed measurable component that gets guys in the first round isn’t always translating to Pro Bowls.”

It’s quite astonishing that Dilfer would come on out and try to expose anyone like that, but especially someone who he’s on the same team with at ESPN. Not only is it throwing Schefter’s football reporting under the bus, but his football acumen as well. And, it’s a serious swipe at his credibility, alleging that Schefter can be so easily used by organizations to do their bidding through the media. It’s also ironic given the criticism Dilfer himself has taken from sportswriters in the Bay Area for being a mouthpiece for former 49ers GM Trent Ballke.

Of course, Schefter didn’t take Dilfer’s comments lying down. In this week’s appearance on Kirk & Callahan, the intrepid reporter responded by flat out denying that the Patriots organization had talked to him about Garoppolo in any way. He also expressed disbelief that Dilfer would try to throw him under the bus publicly. Via WEEI:

“I can tell you this: Nobody in New England has ever told me a certain price that they would want, or are expecting on Jimmy Garoppolo,” Schefter said. “I can promise you that. The New England brass is not using me to get a price out on Jimmy Garoppolo. That is a fact that we can dispel right there. That is factually incorrect.”

“And again, facts will be used to correct Trent there, nobody in New England has ever stated any price to me on Jimmy Garoppolo and nobody has ever said to me, ‘Can you please put that out there so we can drum up the interest,’” he added. “It’s amazing that somebody that I work with and respect as much as I do would say something like that.”

Finally, Dilfer apologized on the air in his next appearance with Dale & Holley. He said he regretted the comments and planned on reaching out to Schefter to apologize.

“Well, yeah, and by the way, Adam and I are very, very good friends. I almost feel apologetic,” Dilfer said. “When I said that last week, it was that — I felt like the Patriots were creating that message to start a bidding war for Jimmy Garoppolo. I did not mean to throw Adam’s name in there by any stretch of the imagination. I listed to my sound and I sounded like I was accusing Adam of being a pawn for the New England Patriots. By no means was I implying that whatsoever.

“I regretfully take back putting Adam’s name into that. I stand by my comments saying that this is very common in the NFL where teams will get a bidding war going by getting numbers out there. I guess that was what I was trying to say last week. I feel bad that this has become a thing because I respect Adam as much as anybody at ESPN.”

Dilfer said he will be calling Schefter to clear the air because he feels bad for what has happened.

“It does sound like, when my sound was played back for me, it sounds like Adam is being used and by no means do I think that,” he said. “Adam is a pro now. I’ve been around Adam. Adam has been on phone calls with other organizations. He doesn’t back down and he doesn’t play pawn to anybody. I feel really bad, actually. That was the first time I heard the sound since I was on the show last week. I feel bad Adam had to respond to that. In fact, when we hang up I will probably call Adam and get things right with him.”

So there you have it. What a bizarre story. Dilfer should have realized how questioning Schefter’s legitimacy could undermine him as a reporter since he’s been faced with the same criticism himself. How Dilfer didn’t realize that’s exactly what he was doing when he made those statements in the first place is puzzling.