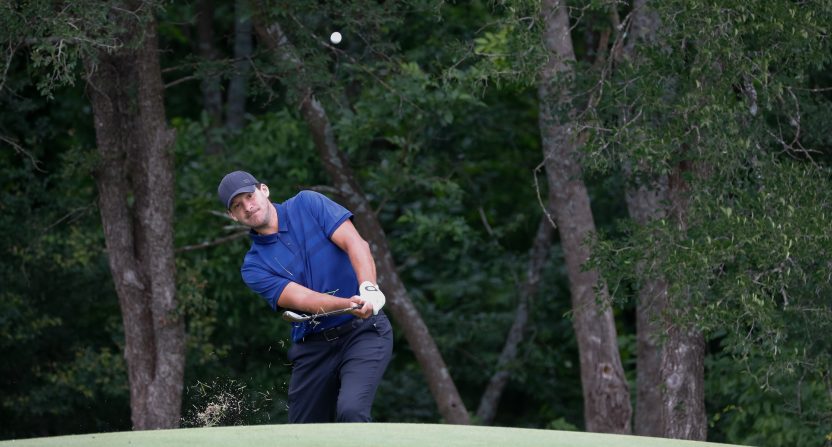 Tony Romo’s got a tough life. The retired NFL star is now one of the hottest broadcasters in football. After breaking out last season for CBS as an analyst during the AFC Championship Game, he’s set to potentially enter free agency once more, reportedly seeking a salary in the $10 million range. Oh, and by the way, he’s also playing golf well enough to get sponsor exemptions at PGA events. He’s even won the American Century Championship celebrity golf tournament two years running.

All of which culminated this week as Romo teed it up at the Safeway Open in Napa, California (again, very tough life for this guy). Thanks to a sponsor exemption, Romo had the chance to play in the tournament for as long as he could stick around. This is notable because, unlike last year, CBS did not block Romo from participating in this tournament. It was understandable that they would, given that it overlaps with the NFL season and a game that Romo is expected to call on Sunday. Presumably, this is a sign of good faith on CBS’ part amidst negotiations against suitors such as ESPN and Fox.

However, it created a conundrum for CBS. It was unlikely that Romo would make the cut this weekend, but if he did, he would theoretically be playing golf in Napa when he was supposed to be Chicago getting ready to call Sunday’s Vikings – Bears game. What happens then?

According to the NY Post’s Andrew Marchand, Boomer Esiason would step into Romo’s place as an analyst alongside Jim Nantz. The former Bengals and Jets quarterback currently works CBS’ “NFL Today” studio show but would shuffle over at short notice.

Alas, the backup plan will remain just that for now as Romo, despite a strong showing on the first day, did not make the cut for the weekend. He shot a 78 on the second day and finished four-over, missing the cut by six.

And so, per Fox Business, Romo hopped on a private jet and headed straight for Chicago, where he’ll call Sunday’s game alongside Nantz at 3:25 p.m. local time.

All’s well that ends well for CBS but it makes you wonder if they’ve opened the door for more situations such as this. Romo will continue to be a hot commodity for golf tournament sponsors looking to boost ratings and get some good PR. And Romo seems happy to try to juggle his job with his hobby, especially while he’s got CBS over a barrel during negotiations. Money talks but perhaps the broadcaster who can eventually also give Romo the most assurances about his golf game will get the upper hand in talks for next season.

In the meantime, just continue to feel bad for Tony Romo and his very tough life.