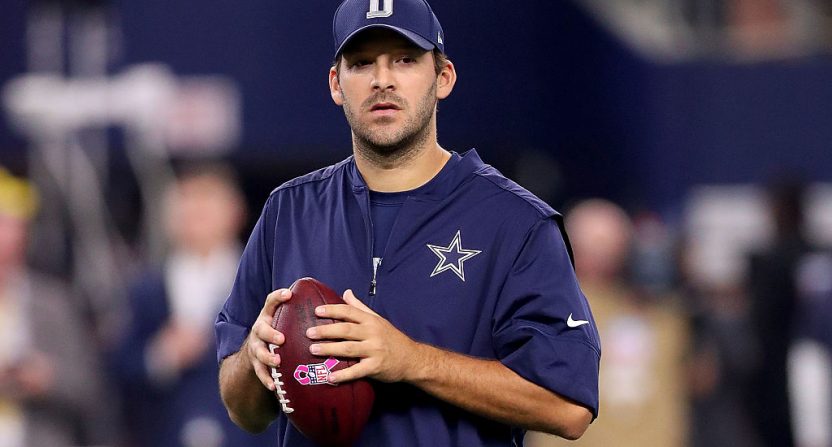 One of the more intriguing moves by CBS during the NFL offseason was to hire former Dallas Cowboys quarterback Tony Romo as its top game analyst replacing Phil Simms. And while there’s been speculation on how Romo will do coming in cold with no previous broadcasting experience, he knows that he’s not going to be wowing viewers right off the bat.

At a qualifying event for this year’s U.S. Open, Romo told the Fort Worth Star-Telegram that he realizes that he won’t be on the level as Troy Aikman or Cris Collinsworth saying, “I know I’ll probably stink for a while.”

Romo didn’t qualify for the U.S. Open scoring a 3-over-par 75 on Monday finishing at a tie for 40th out of 107. However, he did impress those who saw him play.

But back to broadcasting, Romo said that he knows he has a long road ahead to become a top level game analyst:

“I understand I’m coming in without any experience in that world. It’s exciting, it’s a little nerve-wracking, it’s all these things in one. That’s why you love to do things. You’re coming into the unknown and something I have to get better at and I like a challenge. I know I’ll probably stink for a while [in the broadcast booth]. Hopefully I’ll continue to improve at that and hopefully get better and be good.”

We’ve seen networks hire players and coaches for the broadcast booth or studio, but to have them become a lead analyst right off the bat is rare. NBC hired Bill Walsh in 1989 from the San Francisco 49ers front office to become its top analyst to replace Merlin Olsen, but he never reached the level that network executives were hoping for.

Perhaps Romo is trying to lower expectations with his comments, but he also realizes it takes time to improve. With him calling Sunday afternoon games and Thursday Night Football, he’ll have plenty of reps and viewers will be watching his progress throughout the season.