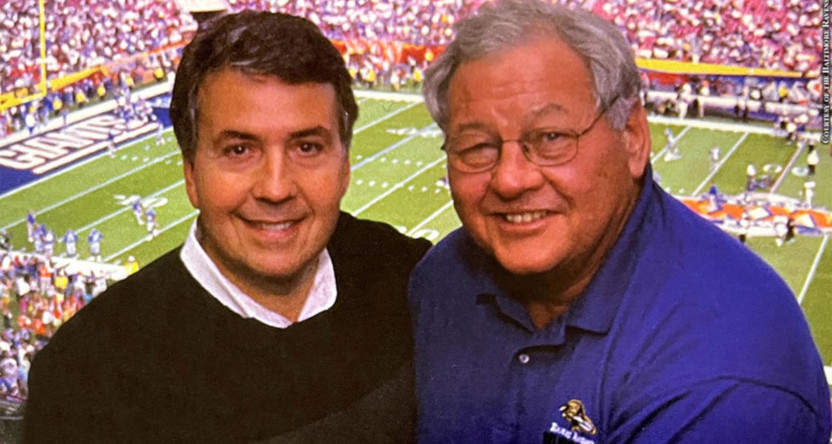 Famed NFL player and broadcaster Tom Matte passed away this week at 82. Matte had an impressive playing career, first as a quarterback in college at Ohio State, then as a halfback in the NFL with the then-Baltimore Colts, and even remarkably as an emergency quarterback with the Colts in 1965 after injuries to Johnny Unitas and Gary Cuozzo. And he then went on to a remarkable post-playing career; he called national NFL games for CBS from 1976 to 1978, called Maryland games for several years, opened a rib stand at Oriole Park when it opened in 1992, served as vice president and TV game analyst for the Baltimore CFL franchise (Baltimore CFL Colts, Baltimore Football Club, or Baltimore Stallions, depending on the year) in 1994 and 1995, and then joined the Ravens’ radio broadcast team as an analyst when the Browns moved to Baltimore and became the Ravens in 1996, a role he’d hold for 10 years alongside play-by-play voice Scott Garceau (seen at left above with Matte). And Matte made a big impact on Ravens’ coach John Harbaugh, who began a Wednesday press conference with a tribute to him:

Here’s more on that, and on what Matte meant to many, from a Baltimore Sun piece by Mike Klingaman and Edward Lee:

“So when we came to town, one of the first people to welcome us were Tom and Judy Matte,” Mr. Harbaugh said. “We went out to dinner, and he was just a larger-than-life personality, and he’s the best. We love him, we love the Mattes, and we know that he’s a man of faith. He’s with his Maker right now, and condolences to their family.”

Veteran Fox 45 sportscaster Bruce Cunningham credited Mr. Matte with helping him get familiar with Baltimore and the sports figures who populated the city after Cunningham arrived from Yorktown, Virginia. Mr. Cunningham, who worked with Mr. Matte on television and in radio for more than a dozen years, said Mr. Matte embodied happiness.

“Tom Matte is the only one of those they ever made,” he said. “I’ve never met anyone like him. You couldn’t be within five feet of Tom Matte and not smile. He was just that guy. He just bounced through life, and he knew that he lived a charmed life, and he loved the fact that he lived a charmed life. Everywhere he went, there were hundreds of fans in his wake. He was just that guy.”

Ravens’ owner Steve Bisciotti also put out a statement, as did the team:

Statements from the Baltimore Ravens and Ravens Owner Steve Bisciotti on the passing of Tom Matte: pic.twitter.com/r3BloRfQKY

Matte had many remarkable moments in life, and had a great career as a halfback, collecting 4,646 rushing yards and 45 rushing touchdowns across 12 seasons (all with the Colts). He was the first to rush for 100 yards in the Super Bowl, doing that in the Colts’ loss in 1969’s Super Bowl III. But his success in 1965 as an emergency quarterback (he hadn’t played that position at all since leaving Ohio State after the 1960 season, and was known more for his running even then, given Woody Hayes’ ground-focused offense; he was the team MVP there in 1960) truly stood out for many. Richard Sandomir has more on that in The New York Times:

But in successive weeks in December, Unitas tore up his right knee and Cuozzo separated his left shoulder, setting the stage for Matte to become an enduring favorite among Colts fans. In a game on Dec. 18, 1965, he and Ed Brown, a journeyman player, shared the quarterbacking duties and led the Colts to a 20-17 victory over the Los Angeles Rams.

Matte did not complete any passes but led the team in rushing with 99 yards.

“We had scratched our complicated offense, but the Rams didn’t know that,” Don Shula, the Colts’ coach, told The Baltimore Sun in 2005. “So Tom would fake a complicated play and then run the ball himself.”

To remember what he had to call, Matte wore a vinyl wristband with all the plays written in tiny lettering by his wife, Judy.

Matte then played as quarterback again in the Colts’ playoff game against the Green Bay Packers, leading the team in rushing with 57 yards and completing five passes for 40 yards. And he had them in position to win, but the Packers tied the game late in regulation on a disputed field goal, then won in overtime on another field goal. That led to Matte tearing off that wristband, but Baltimore sportswriter John Steadman retrieved it, and it’s now on display at the Pro Football Hall of Fame in Canton, Ohio. Matte answered a whole lot of “emergency quarterback” questions over the years, and he sent a letter of support to Denver Broncos’ WR Kendall Hinton after Hinton was put into that role last year once the team’s quarterbacks were ruled out over COVID-19 protocols.

Matte made an impressive impact in football on a wide variety of levels, from college to the NFL to the CFL, and he was beloved by many in Baltimore. His passing led to a lot of Twitter tributes:

I hate having to write these words.
Tom Matte has died. He was 82.
We were friends and broadcast partners for over thirty years and we had more adventures than I can tell you about in a week.
I loved him, and I'll miss him terribly pic.twitter.com/sh1LLFA7RZ

I always said I had the best seat in the press box on Ravens home games because I sat beside Tom Matte. One of the nicest people I’ve met in Baltimore & called my friend. May he Rest In Peace. Condolences to the Matte family, his loved ones, friends and Baltimore Colts family.? pic.twitter.com/xW1kvjvjZw

We will remember Tom Matte for his ever present smile & laugh. A friend to all & a Baltimore Colt for all time.
Rest in God’s peace, Tom ??? pic.twitter.com/UgiXZqL4hM

This was an awesome gesture by Tom Matte. https://t.co/cJucPraJpy

Rest In Peace to the legendary TOM MATTE. pic.twitter.com/6P6ol4ywfq

Tom Matte, who was Ohio State’s team MVP in 1960 and went on to be an All-Pro running back for the Baltimore Colts, died Tuesday at the age of 82. https://t.co/SLs49YoUGG

Terribly sad news. Tom was a regular contributor to our Football Friday/Sunday shows. A great player with a big personality. Condolences to his friends and family. https://t.co/hvlL9xXZpN

Sad to see the reports of the passing of Tom Matte, but what a damn life he lived.

Left it all on the field for the Colts over a decade, and was heavily involved with the Ravens as well. One of Baltimore’s longest tenured sporting legends.

R.I.P. #41 – Tom Matte was a great ? player, sports commentator, & a friend. He was a heckuva fun person to be around. ⁦@OhioStateFB⁩ ⁦@BaltimoreColts⁩ pic.twitter.com/yIko60sUuw

Tom Matte and I loved playing football together. When we needed a runner, he rushed for 1000 yards. When we needed a blocking back, he blocked well for Norm Bulaich. He played QB in ‘65. His wife Judy took our family in during camp. I already miss you Brother. Go With God. pic.twitter.com/8C3mmKRPHF

Sorry to hear of Tom Matte's passing. Such a warm, big-hearted guy. We did a column together “Mondays with Matte” for the former Baltimore Examiner. Few yrs ago he told me he dealing with CTE, I was working on a story, and he and his wife invited me over.https://t.co/ifV8Tdi2kB pic.twitter.com/oHS3IMddwk

RIP Tom Matte, a good running back who played with determination but a better man who lived with joy. You always smiled in his presence. His stories were legendary. pic.twitter.com/xXSUHjMmDm

Nestor: This ring keeps showing up everywhere today. I think every Colts fan in Baltimore wore it at some point. I know I did! R.I.P. Tom Matte. Time will never dim the glory of their deeds. pic.twitter.com/8aTcYlRd3y

Our thoughts go out to Matte’s family and friends.