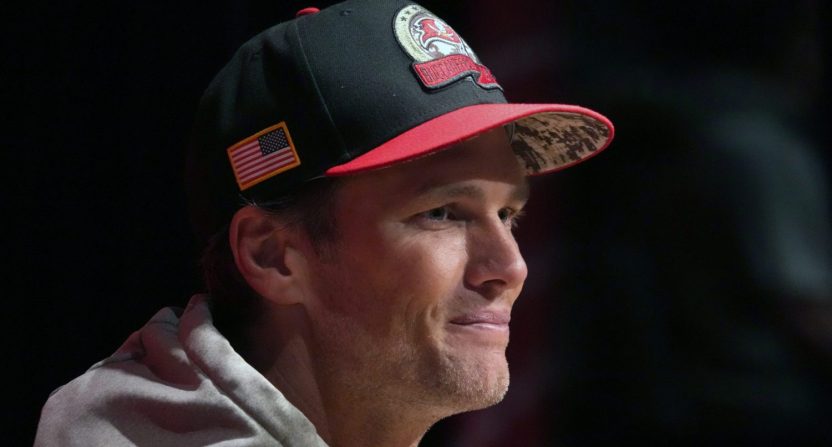 The end of the 2022 NFL season was oddly similar for Tom Brady and Aaron Rodgers. Brutal losses and apparent goodbyes to the media.

If Monday night was the last game of Brady’s NFL career, he went out with some kind words for Tampa Bay’s reporters. As Brady’s season ended with a loss to the Dallas Cowboys, we now get to enjoy weeks of wild rumors about the 45-year-old’s future. While Brady didn’t make any announcement during his postgame press conference Monday night, he certainly sounded like a person ready for the next chapter, whether that means retiring from the field or just moving on from the Tampa Bay Buccaneers.

“Thank you everybody for welcoming me,” Brady continued. “All you regulars, I’m just very grateful for the respect, and I hope I gave the same thing back to you guys. So, thank you very much.”

Brady’s thoughtful goodbye comes after Tampa reporters had somewhat of a rocky relationship with the Buccaneers at times this season. Last month, Bucs reporters Jenna Laine and Greg Auman got into an awkward spat with backup running back Giovani Bernard. Both reporters eventually apologized to Bernard, but trust with some of the Bucs players already appeared to be broken.

And for Brady specifically, his 23rd season in the NFL may have been his most tumultuous with the media. Throughout his career, it was rare to see a negative story written about Brady, but that changed this season as the quarterback went through trials and tribulations on and off the field. Since ending his 40-day retirement last year, Brady saw his name plastered on headlines as he went through a divorce with now ex-wife Gisele Bündchen. That interest in his personal life, however, didn’t stop Brady from thanking reporters for their coverage Monday night.

Maybe the odd sign-off was just a genuine gesture. But it now leaves reporters with more questions as they wonder whether his gratitude confirms rumors that he’s planning on leaving Tampa Bay, either for another NFL franchise or to become a member of the media himself at Fox.