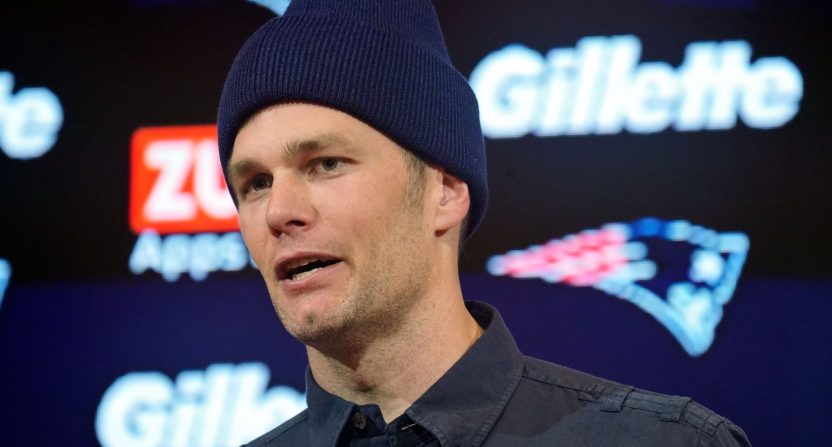 In the moments after ESPN’s Adam Schefter and Jeff Darlington reported that NFL legend Tom Brady was retiring back in January, a lot of people didn’t know what to make of the news. That included the people who run the quarterback’s social media accounts, which is why they posted a tweet to the TB12Sports account that seemed to confirm the news before hastily deleting it minutes later.

Brady and his father would then go on the offensive to refute the report, which made it all the more confusing that Brady’s company’s Twitter account seemed to have a retirement announcement ready to go.

Now we know what happened.

Earlier this week, Fox Sports’ Charlotte Wilder wrote about Shadow Lion, the creative agency that handles Brady’s social media. While they were usually in concert with Brady about posts, the retirement news caught them off-guard, just like with everyone else. And even though Brady had not told them what his specific plans were before then, someone handling the TB12 brand reacted fast in order to be front and center in the conversation.

“There was no media strategy planned because no one at Shadow Lion knew this news was coming and because Brady didn’t confirm that he was retiring after it broke,” wrote Wilder.

After that tweet came down, Brady’s accounts went radio silent on retirement news for a few days as the quarterback continued to deny that he had made a decision.

According to Shadow Lion managing director Gilad Haas, Brady told the agency a few days later that he was indeed retiring and they went to work on prepping social media posts that would stay up this time.

Brady did catch flak for seemingly ignoring the New England Patriots in his initial announcement, though a separate acknowledgment would be added later.

“I think Tom is the king of compartmentalizing,” Haas told Fox Sports. “That’s kind of his superpower to some extent, too. He goes down 28-3, will go to the locker room, will forget about it, and then he’ll come back out and perform. And so I think it carries over into every part of his life.”

I’m beyond grateful. Love you all. https://t.co/kXm2ET27Dk

Haas and creative director Jeff Fine then went about putting together a retrospective video that Brady could share on social media. Naturally, they put together a cut that included highlights from his seven Super Bowl victories and other notable games. However, Tom balked at the entire thing, telling them to start over.

“Tom was like, ‘No, to me, football is about my family, my friends, my teammates, coaches and fans and the moments that we all shared and that emotional connection,’” Fine said. “And that needed to be front and center.”

After Brady sent some notes on how to make the video feel more personal, they finally arrived at the finished product that Brady shared on social media.

I love you all. Thank you ALL for making this incredible journey possible pic.twitter.com/3jmNWid9ZB

It’s never a dull moment when you run Tom Brady’s social media accounts, however. As we know now, Brady’s retirement was short-lived and he announced a return to the NFL on March 13. This time, he met with the Shadow Lion team on FaceTime 30 minutes before making the announcement and they controlled the message in a way that Brady perhaps wished he had the first time around.

These past two months I’ve realized my place is still on the field and not in the stands. That time will come. But it’s not now. I love my teammates, and I love my supportive family. They make it all possible. I’m coming back for my 23rd season in Tampa. Unfinished business LFG pic.twitter.com/U0yhRKVKVm

It’s been a wild NFL offseason in general, let alone for Tom Brady. But if the folks at Shadow Lion have learned anything, it’s to be open to all possibilities when it comes to the whims of their client. You better believe that the next time Tom Brady retires, they’ll be ready.