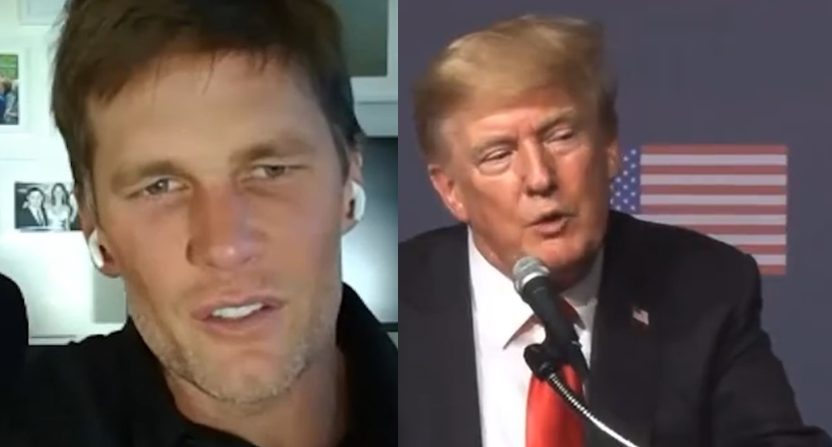 Tom Brady previously admitted to having a friendship with former U.S. president Donald Trump, but now he’s blaming the media for mischaracterizing their relationship. Sounds like a person who learned to cry “fake news” any time there’s a narrative that they don’t like in the press.

Brady was recently the subject of a lengthy Variety cover story by Ramin Setoodeh. Among the many topics that were broached was his relationship with former president Trump, which he said was “mischaracterized” by media.

Prior to Trump’s presidency, a younger Brady was spotted playing golf with the billionaire on numerous occasions.

“This was 17 or 18 years ago,” Brady explained. “I was so young. I got to go to a private golf course. I thought it was the coolest thing in the world…I haven’t talked to him in a lot of years,” Brady added when asked if he’s still in touch with Trump.

But Brady getting invited to a private golf course nearly two decades ago is not the only example of their friendship. And his claim that the media is to blame for mischaracterizing their relationship is just blatantly false.

No media outlet claimed Brady was going to be Trump’s running mate or that they were having sleepovers at the White House. Brady’s relationship with Trump was categorized as a friend and supporter, because that’s how the quarterback himself categorized it.

In 2015, a MAGA hat was spotted in Brady’s locker. Brady dismissed it at the time, claiming it was sent to New England Patriots owner Robert Kraft and found its way into his locker. But that didn’t stop him from displaying it. Still, it’s just a hat. Maybe a better depiction of their relationship was when Brady was asked if he thought Trump could win the 2016 election.

“I hope so, that would be great,” Brady told a group of reporters in front of his locker nearly six years ago. “There’d be a putting green on the White House lawn. I know that.”

And in 2020, when Brady spent a couple of hours on The Howard Stern Show, he explained how his friendship with Trump evolved, categorizing him as just that, “a friend.”

“He would call me after games, ‘I watched your game Tom, let’s play golf together,’ ” Brady told Stern. “So 2003, 2004, that’s kind of the way it was. He would come up to our games and stand on the sideline and cheer for the Patriots. He had a way of connecting with people, and still does. But the whole political aspect came, and I got brought into a lot of those things because it was so polarizing around the election time. It was uncomfortable to me. You can’t undo things — not that I would undo a friendship — but the political support is totally different than the support of a friend.”

I don’t blame Brady for wanting to distance himself from Trump. In fact, I commend someone who can waver from previous support of the former president after learning how divisive he can be. Everyone has the right to have a change of heart. Many people have done it, and Trump himself certainly doesn’t hesitate to cross anyone off his Christmas card list when he changes his mind about a friend.

Brady signaled a desire to burn any remaining bridge he has with Trump and the MAGA crowd last summer when he mocked the former president during a visit to the White House with the Tampa Bay Buccaneers and current president Joe Biden. But Brady can’t be blaming the media here. Just because they’re no longer in touch doesn’t mean the media should have played dumb on their past friendship.