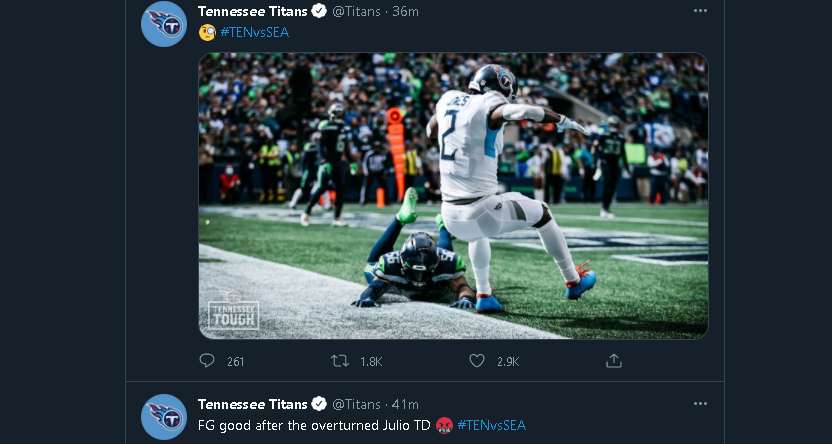 Following team social media accounts on gamedays can sometimes be interesting. There are some similarities seen in most team accounts regardless of league or sport (score updates, tweets of key clips, lots of excitement when the team does something well), but there are also some notable team-to-team differences in voice and approach (as you’d expect; professional sports franchises aren’t a monolith, and neither are the people who work for them). Some accounts tweet about individual plays more during a game, some focus more on particular engagements with fans, and some even go entirely quiet if things aren’t going well (we do not recommend that approach).

But a particularly rare thing to see is significant and repeated criticism of officiating decisions. And that’s what the Tennessee Titans’ account offered Sunday after a touchdown from receiver Julio Jones was called back on review. However, they mostly did that with emojis rather than words. Here’s the play itself and their tweet of it:

Yes, there’s possibly something to criticize there, as that sure appeared to be both feet down inbounds to a lot of people. But it’s still strange to see it criticized by an official team account. They started that with a passive “What do y’all think?” and a “unamused face” emoji:

They overturned this. What do y'all think? ? https://t.co/9lS9nWIcGz

The emojis then escalated to “Face with symbols over mouth”:

A notable element of this is that there aren’t any particular words in these tweets saying that this was a bad call. And perhaps there’s an NFL prohibition on that. So maybe the “expressing displeasure through a series of emojis” approach is a way to get across the feelings of the team (well, specifically, the individual or group running the Twitter account on gameday; teams don’t have feelings) about this call without using words. But the point the account is trying to make criticizing this call is still quite clear.

In general, there would seem to be some drawbacks to an official team account taking positions on officiating rulings. Players in many leagues (including the NFL) can get fined for criticizing officiating, and so can coaches and organizations, and there’s some logic to that; officials take a whole lot of heat in the first place, and attacks from players, coaches, and teams don’t help. And it’s notable that those kinds of fines do not prevent all officiating criticism; there’s plenty that players and coaches can say without being fined, and they can also say whatever beyond that they want, they’ll just get fined for it. And there’s maybe more logic to officiating criticism that comes from a player or coach than from a team’s Twitter account; with a player or a coach, it’s clear at least who’s saying it.

But it’s also worth keeping in mind the duality of a team Twitter account. It’s absolutely looked at by outsiders, including us in this situation, but a lot of what a team Twitter account is doing is aimed at by fans of that particular team. And while this approach has generated some outside criticism and snark, it’s also seen a fair bit of support from some Titans’ fans. And at least they chose to do it on a play where there’s a reasonable neutral perspective that the officials got it wrong, rather than something where it’s only their fans who think they were robbed.

Will any benefits the Titans get from this Twitter approach be worth a possible fine here? Can the NFL even fine a team for “officiating criticism through emoji use”? That all remains to be seen. For the moment, it’s definitely notable that the Titans are emoji-mad online.