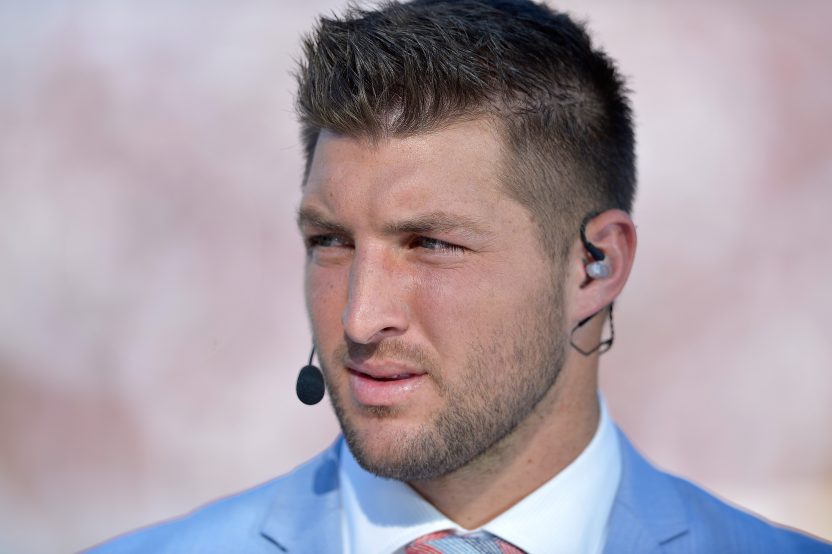 The “Tim Tebow to the Jacksonville Jaguars” story has escalated. As per NFL Network’s Ian Rapoport and Tom Pelissero, that’s now gone from the tryout Tebow requested late last month to the team planning to offer him an actual one-year contract:

The #Jaguars are planning to sign QB-turned-TE Tim Tebow to a 1-year deal, per me and @TomPelissero, a deal that could be official in the next week or so. Nothing done yet. But he’ll have a chance to make the team to reunite with his mentor and college head coach Urban Meyer.

It looks like Tim Tebow is finally going to be playing for his hometown team. Just not as a quarterback.

The Jacksonville Jaguars are expected to sign the 33-year-old Tebow to a one-year contract either later this week or next week to play tight end, a position he never played in high school, college or his previous three-year NFL career, a source confirmed to ESPN. A deal has not been agreed upon at this time, however.

…Tebow hasn’t played football since the 2015 NFL preseason and has spent the past six years working as a broadcaster on the SEC Network and working on his professional baseball career. Tebow was adamant about remaining a quarterback during his three seasons with the Denver Broncos, New York Jets, New England Patriots and Philadelphia Eagles but apparently has had a change of heart now that Meyer is running the Jaguars franchise.

This comes only months after Tebow (seen on-field during a 2014 SEC Network appearance) announced his retirement from professional baseball in February. There, he advanced as high as Triple A, hitting .163/.240/.255 with four home runs and 98 strikeouts in 77 games at that level in 2019. We’ll see if he finds more success as a NFL tight end. And we’ll also see if this leads to any changes to his role with ESPN/SEC Network.

However, ESPN doesn’t have to make a Tebow decision quickly. Even with a contract, Tebow will still have the challenge of trying to make the Jaguars’ actual in-season team. NFL teams currently have 90-man offseason roster limits, but that goes down to 53-man active rosters (which can be temporarily bolstered by one or two practice squad players on game day without changing their status) and 12-man practice squads (which were boosted to 16 in 2020 due to COVID-19 concerns, but seem to head back down to 12 this year before going to 14 in 2022) in-season. So for each team that hits the 90-man offseason roster limit, at least 25 of those players won’t be with the team on the active roster or practice squad by the season (and the actual number is higher; teams tend to cut down below 65, then bring in cuts from other teams to get back up to that level).

And if Tebow does wind up being one of those cuts, and doesn’t sign on with another team (which seems unlikely; the hometown and Meyer connections make it seem like he has more of a chance in Jacksonville than anywhere else), he can just go back to his ESPN job. That largely involves SEC Nation Saturday appearances that don’t start until late August or early September. So there may not wind up being much of a conflict here at all; Tebow may be less available for other ESPN appearances during OTAs and training camp, but his main scheduled thing is SEC Nation, and his attempts to play minor-league baseball presented more spring/summer conflicts than the NFL would.

Granted, ESPN might want to make sure they have a backup plan in case Tebow does wind up making the Jaguars and isn’t available for SEC Nation this fall. Unlike the Mets’ minor-league affiliates, it seems unlikely a NFL franchise would just say “Hey, yeah, take Saturdays off to go do TV.” But ESPN does have a lot of analysts with SEC ties they could conceivably put into Tebow’s SEC Nation spot without a huge amount of notice, so it doesn’t seem like they necessarily have to go make another hire on the chance Tebow might not be available. (And it’s not like a pre-game show has to have a set number of people, either; if they do wind up making another hire and Tebow does come back, both of those people could be on the show.)

At any rate, if this contract does come to pass, it will put even more offseason focus on the Jaguars. And that’s notable with them already drawing a lot of interest around first-overall draft pick Trevor Lawrence and first-time NFL head coach Meyer. It’s also notable that while the Jaguars are not one of the five teams that can be forced to be on the HBO/NFL Films Hard Knocks series, there’s been quite a bit of talk that they might take the unusual step of volunteering, with NFL.com’s Dan Hanzus even predicting them as the pick back in February. And if they do wind up on Hard Knocks, boy, will there ever be some Tebow storylines.