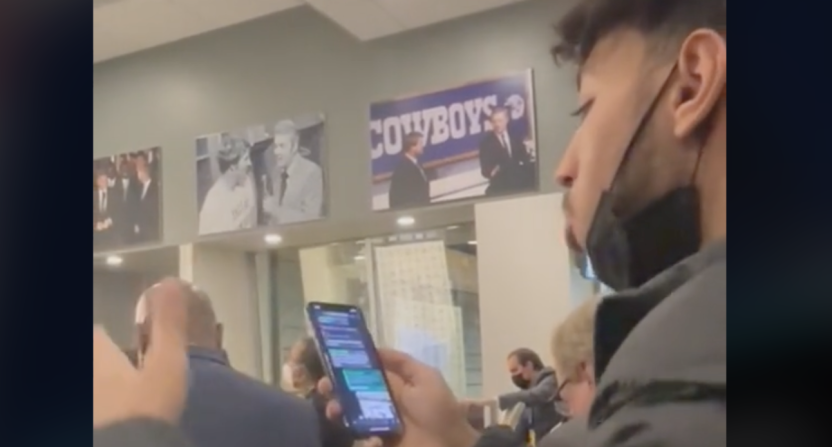 Dak Prescott’s press conference following the Dallas Cowboys‘ loss to the San Francisco 49ers was notable as it led to the quarterback’s comments in support of Dallas fans throwing things at the refs following the game. Prescott would go on to apologize for those comments and get fined $25,000.

However, the presser also has an interesting footnote with the discovery that TikTok influencer finessefave snuck into the AT&T Stadium press room and asked Prescott two questions.

Via his (or their) TikTok page, finessefave claims to have snuck into the game with two other people by disguising themselves as NFL media workers and wearing NFL media vests they had found. From there they posted video walking through the stadium tunnels, past the players’ parking garage, and eventually making their way to the media room. The two TikTok videos from the stadium jump around a lot so it remains unclear how any of this happened or if it’s actually how things went down. However, there’s no denying that he was able to make it to the media room and lob a couple of questions at Prescott.

To be honest, given some of the oddball and embarrassing questions we’ve seen actual reporters ask during sports press conferences recently, he didn’t do that bad.

The first question was about whether Prescott should have looked for the referees to get to the ball following his now-famous run up the middle with no timeouts. The second question was about how the Cowboys got back into the game despite being down 23-7 in the third quarter.

Both were totally fair questions to ask, the second of which elicited a decent answer from Prescott.

“Offense wasn’t doing well, wasn’t doing enough. The defense stepped up and made a play (and) got some momentum going,” Prescott said. “And once that happened we were able to get a score and get within six, and we just weren’t able to capitalize when we needed to.”

This revelation likely won’t be received very well at AT&T Stadium’s security office, nor with the NFL brass. Especially when they check the reply to Jon Machota’s above tweet, in which Twitter user and Cowboys fan Stephen Betancourt shared a video of himself and a friend allegedly getting into a limousine that was waiting to pick up players.

Sir me and my drunk friend made it downstairs. It wasn’t hard to “sneak” in. https://t.co/Nq8nZIuIvX

Clearly, this is just further proof that everyone wants to get a piece of the Dallas Cowboys media pie.