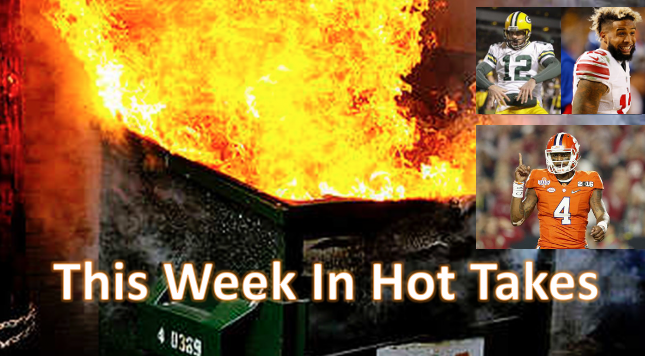 Welcome to another edition of This Week In Hot Takes. Try our new and improved formula, featuring 100 per cent less Jason Whitlock! Here are the hottest non-Whitlock takes from sports media figures for the week of Jan. 6-12.

“Why can’t you charge twice as much money for half as many ads?” Yes, Clay, simple supply and demand would suggest that might work, but there’s more at play than just that. You’re not necessarily going to convince a company an ad spot is worth double the usual rate (especially when the rate is already high, as it is for marquee events like the title game) just because you’re selling less of them.

Ad load is a carefully-considered decision based upon a lot of research, as are ad rates, and there are good reasons ESPN sets theirs the way they do. Also, there’s no indication that the viewership was significantly affected by ads; last year’s title game didn’t seem to have much different of an ad load, and its ratings were great. Plus, if people wanted less ads, they could have always turned to the coaches’ film room telecast, where ESPN actually did go out of its way to sell less commercial spots. Overall, this is an empty sports media take full of hot air; it may sound appealing on first glance, especially to the uninformed, but there’s no real thought or substance to it.

“Sooner or later, your talent won’t get you into stadiums. Sooner or later, you’ve got to be on this side of the road.” There’s something odd about a lecture on off-field behavior coming from a guy who was charged with two counts of murder and pled guilty to obstruction of justice in relation to stabbings outside a Super Bowl party.

3. Shannon Sharpe thinks the CFB playoff is “The Alabama Invitational”:

.@ShannonSharpe: After tonight, the College Football Playoff will be called the "Alabama Invitational." pic.twitter.com/Eb58uNFAyR

Undisputed‘s producers loved this take so much they turned it into a graphic:

How’d that one work out for you, Shannon?

2. Don Cherry criticizes Cam Newton for celebrations, tells him to learn from Aaron Rodgers, has apparently never watched Aaron Rodgers: CBC hockey commentator Don Cherry causes plenty of controversy with his takes on the NHL, but turns to other sports, it often goes even worse. The latest example comes from some thoughts Cherry posted to Twitter Monday afternoon, a full day after the NFL’s latest playoff games (one of which involved Rodgers, but Newton wasn’t even playing):

Here’s what’s in that linked document (consider it sic’d):

Cam Newton quarterback of the Carolina Panthers and his agent should get the video of Aaron Rodgers, quarterback of Green Bay, and learn how to act as a quarterback in the NFL. Confidence with class. After that Hail Mary pass to Randall Cobb to put Green Bay up 14-6 at halftme. He just celebrated as if he said “eh that’s not a bad pass, I did it before and I’ll do it again.” Newton after he scores a touchdown or is responsible for a touchdown dances and puts on a show. And I know reporters who really don’t know, say “it’s just a young man expressing his joy.” Fine do it if you want to but don’t whine when the players take that extra shot at you for being such a hotdog. After he gets a shot, his agent and him go to the head of the NFL and whine the players are being mean to him. No kiddin! Yes players will try to hurt Aaron Rodgers but that’s the name of the game. But they won’t try to give him that extra shot like they do Newton. You want to act like a hotdog after a touchdown pay the price and don’t whine. It’s too bad because Newton is a great quarterback. As one of the players said about Newton “there’s not enough mustard in the world to cover this guy.” Like I said, Newton should learn from a class guy and act like Aaron Rodgers. When Aaron scores he just looks and says nice touchdown and he acts like I’ve done that before and I’ll do it again.”

Apparently Cherry has never heard of Rodgers’ championship belt celebration, something so famous ESPN did a full segment on it several years ago:

And State Farm turned it into a commercial:

It’s shocking that Cherry would criticize a black player for celebrations. We’ve never seen that before at all. There’s also something funny in the hypocrisy of a guy who’s known for wearing the loudest suits and launching the hottest hockey takes complaining about others “being such a hotdog.” But the best part is that Cherry couldn’t have picked a worse comparison than Rodgers, given how famous Rodgers’ touchdown celebration is.

1. Skip Bayless says Deshaun Watson “just doesn’t have it,” calls him “timid and lifeless” and says he’s “inexplicably lost his way”: Bayless’ tweets during Monday night’s national championship game might be the best example in a while of a ludicrously-hot in-game take going very badly wrong, especially when it came to Clemson quarterback Deshaun Watson:

Did somebody kidnap the Deshaun Watson who unleashed on Saban's D a year ago? Who is this timid, lifeless guy?

Deshaun Watson just doesn't have it tonight. Badly missed 2 deep throws that were there. That 3rd-down pass wasn't even close. Trouble.

This game has turned into an unfortunate joke. Clemson has lost heart because its leader has inexplicably lost his way.

This championship game is about to be OVER.

Predictions go wrong all the time, of course, and plenty of others thought the game was over when Alabama was up 14-0, but few were as critical of Watson as Bayless. How’d that work out? Watson threw for 420 yards and four touchdowns in one of the best title performances since Vince Young in 2006. Nice work there, Skip.

Notable absences: Stephen A. Smith, JT The Brick, The New York Post. Congratulations to Undisputed for landing three takes in this column in one week (and they could have had more). Embracing debate is really working out for Fox.