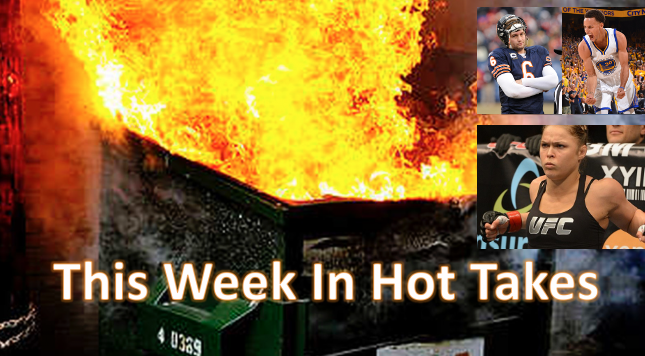 Welcome to a new year of This Week In Hot Takes, rounding up the hottest takes from sports media. This time, we’re covering the week of Dec. 30-Jan. 5.

5. Jeff Mans thinks Anthony Lynn is “a scumbag”: Mans, whose Twitter bio lists him as the COO of Fantasy Alarm and a Sirius XM host, apparently has strong feelings on interim Bills coach Anthony Lynn:

The #Bills are getting beat because Anthony Lynn is a scumbag that undermined his OC & HC to try and better himself. #GodIsAlwaysWatching

Mans then followed up after the Bills’ loss:

It’s unclear how Mans thinks Lynn “undermined his OC” (Lynn was the OC for most of the season following the Week 2 firing of Greg Roman, so presumably he believes Lynn caused that firing?) or his head coach (it wasn’t Lynn making the call to fire Ryan, and while he stated he’d do some things differently, his comments about Ryan were pretty positive). In any case, this is a pretty fiery take.

4. Stephen A. Smith on Jay Cutler and the Bears: The new “Final Take” segment on ESPN’s First Take, featuring one of the personalities giving an uninterrupted essay on a subject of their choice, produced gold for this column last week with Stephen A.’s rant on Kevin Durant, and it’s done so again:

Criticizing Jay Cutler is one thing, but calling him “a joke” and “the worst quarterback in the NFL simply because he has no leadership skills” and mocking him leaving a playoff game with what turned out to be a sprained MCL is pretty hot. Smith’s also cherry-picking his stats here, going mostly off win-loss records (which is related to quarterbacks, but not entirely in their hands) and choosing touchdown totals that don’t illustrate what Cutler has done well. Sure, Cutler has had his struggles, and sure, there’s an argument for the Bears to move on from him, but he’s been far from the worst NFL quarterback over his career and has had some impressive seasons. Alshon Jeffery (who Smith seems to have never heard of before this) probably isn’t right that the Bears will win the Super Bowl next year, but this kind of reaction to his comments on Cutler is crazily over the top.

3. FanSided suggests trading Steph Curry for Rajon Rondo: FanSided ran a slideshow of “5 Crazy NBA Trades That Need To Happen,” and at the #2 spot, suggested that the Golden State Warriors should trade reigning two-time MVP Steph Curry (who’s averaging 24.2 points and 5.8 assists this year with 5.6 win shares) for struggling Chicago Bulls’ point guard Rajon Rondo (7.2 points and 7.1 assists per game this year with 0.4 win shares). The article has since been pulled and replaced with an apology, but here’s an excerpt of it:

Really, “Rondo may actually be a better fit as a point guard in Golden State”? Really? This is a ludicrous take, and fortunately, someone there realized that after the fact. Here’s the key part of the apology:

A few days ago at FanSided, we ran a slideshow entitled “5 crazy NBA trades that need to happen.” One of those trade suggestions — Rajon Rondo, a first round pick, and salary filler, for Stephen Curry — was a little bit crazier than the rest. We’ve taken some heat today on Twitter for the piece, and rightfully so. The different trades in that slider represented different degrees and styles of crazy. The writer could have done a better job of pulling on a consistent strand of crazy and making clear which strand he was working with. Our FanSided editorial team, definitely should have made sure that the chosen strand of crazy was clear, consistent, and obvious to readers.

The piece should not have run without those changes being made, but it did. And here we are. FanSided has come along way in the past few years and I am proud of the work we have done since I came aboard in April, building up quality NBA coverage both at The Step Back and at our regular NBA homepage. We strive to cover the league as well as LeBron James plays basketball, but we have to battle our inner Nick Young. Sometimes we throw up a triple-double. Sometimes we run up court celebrating while a blog post rims out behind us.

We will try our damnedest to make sure we are dialed in for the next one.

It should be noted that said article also suggested the New Orleans Pelicans trade Anthony Davis to Boston. It’s something when that isn’t even your hottest take.

We covered this one earlier in the week, but it’s certainly one of the hottest takes we’ve seen in quite some time. A “media-driven” “liberal agenda” that represented a “belief that women are better than men” (even though one of the only people suggesting Rousey should fight men and would defeat Floyd Mayweather was Travis himself)? Way to throw out the buzzwords there, Clay, including calling her a “sports Madoff.” The best part is how Travis’ own takes on Rousey have evolved over time:

Congratulations on one of the hottest takes in the history of this column, Clay. And sadly, it’s not even good enough for top spot thanks to one of your colleagues.

1. Jason Whitlock calls Rousey “an establishment media rig job”: Amongst the many, many outrageous things Jason Whitlock has said over the years, this is near the top:

Oh, and he went on TV to try and explain this too:

The “fraudulence” here is something else, as is the reference to “our friends at the PC sports network” (ESPN). Rousey had an incredible string of successes, which are unfortunately being overlooked now that she lost against another very capable fighter in Amanda Nunes. And Whitlock’s argument that she only had four fights lasting 154 seconds is actually an argument in favor of how dominant she was. But beyond that, the attempts of Whitlock and Travis to try and make this about “progressive media” are insane. And how is a sports meritocracy “conservative”? Just keep throwing out the buzzwords, guys; maybe one will eventually stick.

Notable absences: Skip Bayless, Shannon Sharpe (almost made it for his own Rousey take), JT The Brick, The New York Post. Welcome to the column, FanSided and Mans!

Happy Hot Take New Year! Tune in next week for more This Week In Hot Takes. As always, you can send submissions to me here.