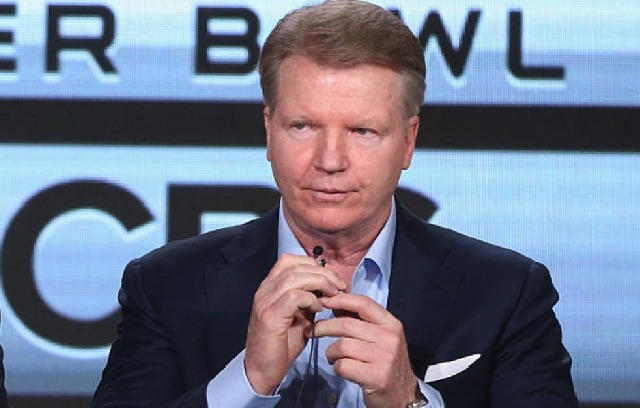 Viewers were treated to Simms’ work last Saturday when he and Jim Nantz called the New England Patriots’ 34-16 Divisional Round playoff win against the Houston Texans.

As usual, Simms mixed in word salads, misinformation, obvious analysis and bizarre analysis over three-and-a-half hours, while continually acting like Brock Osweiler was a good NFL quarterback and the Texans had a chance to beat the Patriots.

Here are 12 examples we collected while watching the telecast:

1. Word salad + bizarre analysis, 10:45, 1st quarter: “I think benching Brock Osweiler has really brought this team and now they really have a clear vision of how they want to play the game. Conservative on offensive, be extremely careful with the football.”

2. Misinformation, 9:37, 1st quarter: “[Chris] Hogan one of the free-agent signings during the offseason and they talked about him he lived up to everything they thought he would be and he can play anywhere on the field any position very smart.” (He’s only played wide receiver for New England.)

3: Bizarre analysis, 11:53, 2nd quarter: “You gotta say this, Jim. The Texans offense, a little more assertive, sharper, definitely making more plays.” (The Texans had three points at the time of this statement.)

4. Bizarre analysis, 10:43, 2nd quarter: “So far, Tom Brady has not been under pressure.” (At this point in the game, Brady had four pass attempts under his belt.)

5. Word salad, 8:39, 2nd quarter: “I think Osweiler just threw that last one away. Not that he missed Miller. He was open. But I think he thought he felt pressure behind him got rid of the football to try to get away from the negative play.”

6. Bizarre analysis, 7:48, 2nd quarter: “Nobody’s open down the field. Let’s watch Hopkins, Number 10, against Logan Ryan. Man, Logan Ryan. He’s not trying to cover people. He’s trying to get the interceptions.” (Actually, he was doing both since he’s a cornerback.)

7. Obvious analysis, 6:57, 2nd quarter: “When you throw it high and far in the air, it’s always much easier for the receiver to find the football.”

8. Obvious analysis, :19, 2nd quarter: “I’m pretty sure they’re gonna go for the touchdown here.” Before a 3rd-and-1 play for the Patriots, who also had two timeouts.

9. Bizarre analysis: Halftime: “I’m just thinking the first half real quick though. Osweiler has to be happy about the way he played.” (Osweiler had 20 attempts in the first half for 83 yards.)

10. Bizarre analysis, Start of 3rd quarter: “The game of football is about being physical. That’s usually who wins the game and the team that was most physical in the first half was the Houston Texans. Even though they fell down 11, 14-3, their body language was great and they just out hit the New England Patriots and we’ll see do the Patriots can they find an answer for that inside rushing of Merciless and Clowney.”

12. Bizarre analysis, 6:37, 4th quarter: “Well, big field goal takes all hope away from the Houston Texans here. Of course, it’s not over, but you gotta say the fight was, their competitive level was better than it was in Week 3, that’s for sure.” (Congrats, Houston. You lost by fewer points in your playoff game than you did in a game four months ago!) 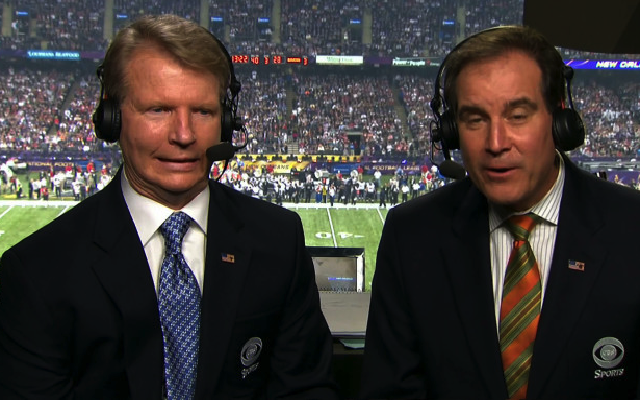 Naturally, Twitter users are like a dog with a bone when Simms calls a game. He actually may have passed Joe Buck when it comes to the quantity and intensity of Twitter venom for broadcasters.

Personally, I think you should take tweets about ANY broadcaster with a grain of salt, because at the end of the day, they don’t hold much weight to network executives.

However, the social media daggers hurled at Simms are pretty special. Here is a sampling taken during Saturday night’s playoff game:

I rather do life in jail than listen to Phil simms

Phil Simms made this game tough , he is clueless, use to be able to listen to. but has lost a lot off his fastball

How many times does #philsimms have to say "really good job by" … omg, can't he say anything else?

Who does a better job of earning his paycheck, Phil Simms or Brock Osweiler? Is this the only instance where Osweiler is the better value?

Sometimes when I listen to Phil Simms I question my own sanity. So much talking, so little info

I hate when NFL broadcasters call an end around a reverse and call a reverse a double reverse. Learn your terminology @PhilSimmsQB

Can we crowd-fund Phil Simms' contract buyout? There needs to be a kickstarter for that

@PhilSimmsQB is the worst announcer in all of sports. I honestly think my turd could announce better

I'm not sure what's more embarrassing in this game: the refs or Phil Simms. #Patriots

The most insightful thing Phil Simms has said tonight is that the Texans defense would be better with JJ Watt.

I love those moments when Phil Simms sounds like Lou Holtz

What does all this mean? Nothing. CBS loves Simms and has come to his defense against Twitter hate. So Twitter will continue to vent their frustration, while Simms will continue to call the AFC’s best games.

On the bright side, we’ll be free of Simms for about seven months after this Sunday, when he calls the Steelers-Patriots AFC Championship game.

Jimmy Traina spent 13 years at SI.com, where he created and wrote the twice-a-day Hot Clicks feature. He also worked at the Associated Press and FoxSports.com.