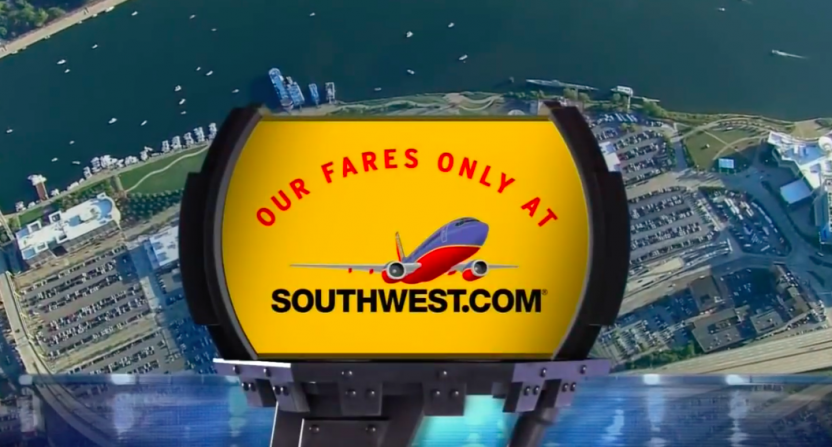 Even if you don’t know what a “billboard” ad is, you’d know it if you saw it. In fact, if you’ve been watching sports on television for even a short while, you’ve probably seen thousands of them.

For example, you’re watching the NFL on Fox. One team kicks off and the other team signals fair catch. Instead of going to commercial, the broadcast stays with the game but cuts to a wide shot of the stadium. A graphic pops up on the screen touting your favorite beer or some new action movie or some financial company that seems like they’re probably doing something shady. The play-by-play announcer interrupts the football conversation to tell you that today’s game is brought to you by the aforementioned company and then the graphic disappears and you return to the action. That’s a billboard ad.

And if the NFL has it’s way, billboard ads will be going the way of the dinosaur.

Per Variety, the league has started asking its broadcast partners to do away with the time-honored advertising tradition. The reason? Well, if you were a certain kind of copy editor, you might say that millennials are killing the billboard ad.

Older generations of TV viewers had to tolerate commercial breaks that diverted their attention for minutes on end. Modern video fans, however, have grown accustomed to binge-viewing programs with few commercials – sometimes none.

In other words, modern TV audiences just aren’t conditioned the same way as previous generations when it comes to ad breaks. Whereas you used to just suck it up and deal with the 47th Bud Light commercial of the day, now some people just say enough and change the channel.

At least one NFL partner is listening. Variety reports that Fox has basically done away with billboard ads from “Thursday Night Football.” However, the ads are still prevalent in Sunday afternoon NFL games. ESPN also appears to be testing out several replacement options so that they can still get that precious advertising money without the interruptions and slowdowns costing them viewers.

However, for as powerful as the NFL might be, they’ve got a fairly impressive foe in this battle to eradicate billboard ads completely. Madison Avenue fell in love with the billboard ad a long time ago. And some networks, such as CBS, have no plans to stop using them anytime soon.

“We have that option” to trade them out for a different kind of in-game commercials, “and if we see something we like, we may utilize it,” Anthony Taranto, senior VP of NFL sales at CBS, told Variety. “We will continue to give people billboards,” he added. “They are a solid value, and advertisers like them.”

Part of the problem the NFL is running up against is that billboards have been such a cornerstone of the sports broadcast advertising deal for so long, advertisers might feel like they’re losing out on value if they’re taken away. And that could lead to less advertising or at least the loss of some long-term partnerships.

Amanda Herald, VP of media strategy and business development at the NFL, told Variety that the hope isn’t to just eliminate an ad opportunity altogether, but instead encourage network partners to find different solutions.

Billboards “are not necessarily going to be eliminated entirely, and we are not seeking to mandate that,” says Herald. “But we are encouraging measurement of the results” of using other formats “to see what impact it has. Advertisers can get the same return and same bang for their buck – and maybe greater – but also engaged fans. It isn’t just about the ad message, but it’s also about the fan engagement.” Some of those potential alternatives include the takeover of an entire ad break during a game or secondary revenue sources like those found on Twitch where viewers can make purchases while watching.

The numbers all point to the NFL’s ratings rising in most cases, so the league isn’t coming from a place of desperation. But it’s clear they’re looking to the future all the same. With so many different ways for consumers to watch NFL games and so many untapped resources and revenue opportunities, they’re going to want to push their partners towards that rather than resting on their laurels for a little too long. Ultimately, whether or not advertisers want to come with them is what will likely determine how quickly the future comes.