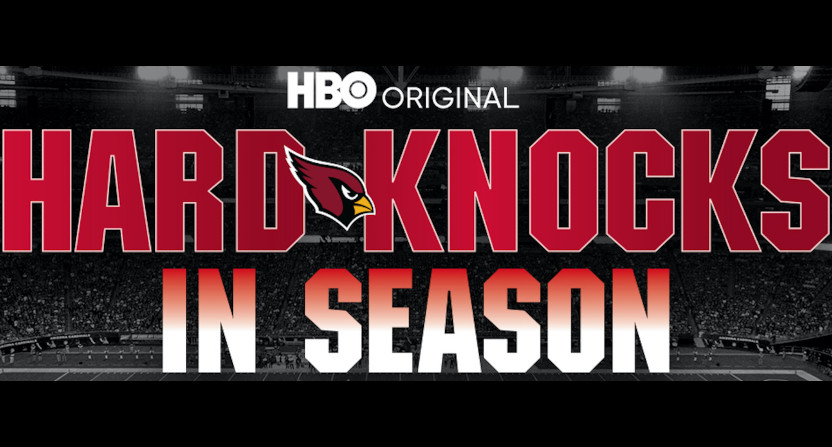 Last year saw the first-ever in-season edition of HBO/NFL Films’ Hard Knocks, focusing on the Indianapolis Colts. That was in addition to the typical preseason Hard Knocks on the Dallas Cowboys. The in-season version brought some interesting behind-the-scenes looks at the Colts, from preparations for their “monsoon” game against the San Francisco 49ers to how head coach Frank Reich found out about Quenton Nelson being placed in COVID protocols to off-field angles like Darius Leonard’s work on his daughter’s hair. It even drew some attention from other NFL coaches, with New England Patriots’ head coach Bill Belichick saying his staff used it to scout the Colts. And HBO and NFL Films announced Monday that the in-season show will be back this fall (in addition to the normal preseason one this summer, which will be on the Detroit Lions), and will be covering the Arizona Cardinals. Here’s more from a release:

The 18-time Emmy®-winning weekly series will deliver its signature all access coverage to document an NFL franchise in-season and in real time, following the Cardinals as they navigate the challenges of an NFL season and battle to return to the post-season. The series will be available on HBO and to stream on HBO Max during the 2022 NFL season beginning in November.

“Last season Hard Knocks made an unprecedented leap, documenting an NFL regular season in real time for the first time ever with the Indianapolis Colts,” said Keith Cossrow, NFL Films Vice President and Senior Coordinating Producer. “It was a vivid and illuminating look at the life of an NFL team. This season, we are eager to build on that success and go even further with one of the most exciting teams in the NFL. We can’t wait to get to work in Arizona, and we thank Michael Bidwill, Steve Keim, Coach [Kliff] Kingsbury and the entire Cardinals organization for this opportunity.”

“We’re excited to feature the Arizona Cardinals on Hard Knocks during the NFL regular season in the upcoming installment of Hard Knocks In Season,” said Nancy Abraham and Lisa Heller, Co-Heads Of HBO Documentary & Family Programming. “We couldn’t be happier to continue to expand our tremendously successful partnership with the NFL and grow the Hard Knocks experience for our viewers. We’re thrilled that the Cardinals will be joining the roster of teams that have graciously invited our audiences into their world.”

The Cardinals are no strangers to documentary programming covering their seasons, as they were featured on the first NFL season of Amazon’s All or Nothing back in 2016 (with that covering their 2015 season). However, there’s a significant difference in the timing; All or Nothing aired after the season, while this in-season Hard Knocks airs each week shortly after the events in question. (The NFL Films team that does these series is very adept at quick film-to-air turnarounds, as director Tim Rumpff told AA back in 2019 about the preseason show.) So there is at least the possibility of it being used for scouting the way Belichick cited, and that may pose some concerns for teams about being featured on the show.

However, it’s notable that all sorts of comments to media get lumped in that sort of advance scouting. And last year’s in-season Hard Knocks showcased that, with Reich mentioning how the Colts noted something then-Jacksonville Jaguars head coach Urban Meyer said at a press conference and used that to solid effect. So it’s not like teams are immune to advance scouting through the media if they’re not  on Hard Knocks, and it’s far from clear that anything emerged on this in-season Hard Knocks that would have been particularly useful for opponents.

At any rate, the Cardinals should be an interesting team to follow. There are plenty of storylines around them, perhaps particularly around quarterback Kyler Murray (they picked up his fifth-year option earlier this year, so he’s under contract through at least 2023, but there’s been lots of discussion on if he’ll stay there long-term). And Kingsbury is a notable figure as well; he’s been there since 2019, but has only posted a 24-24-1 regular season record (and an 0-1 playoff record) to date, so there could be some pressure on him. We’ll see how this edition of Hard Knocks goes when it comes out this fall.