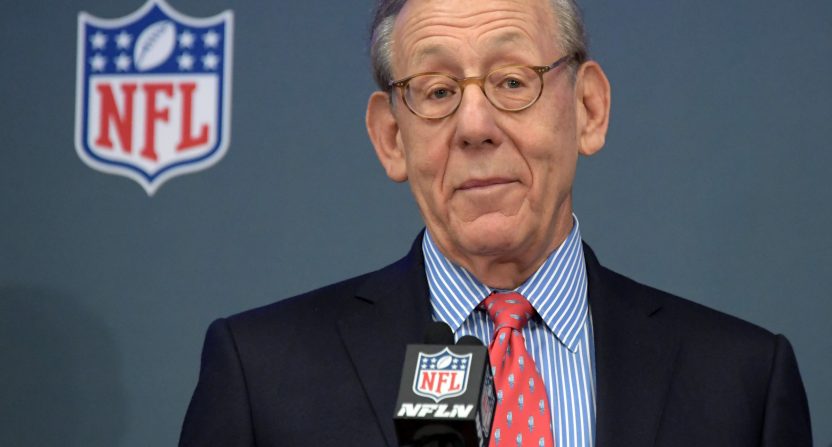 Miami Dolphins owner Stephen Ross is in the news after Dolphins wide receiver Kenny Stills pointed out the hypocrisy inherent to Ross running a foundation aimed at combating racial inequality while also being a major supporter of President Trump.

? You can’t have a non profit with this mission statement then open your doors to Trump. https://t.co/sNBWfEXvLn pic.twitter.com/nNkRf2wJep

Ross finally issued a statement tonight on the matter:

Before that statement, though, the Ross PR  damage control train had clearly left the station, with separate stories running at four outlets including what amounted to an identical quote from an anonymous source, who apparently decided to just send it out en masse in response to press inquiries.

The relevant quote, from the Miami Herald:

A source familiar with Ross’ thinking told the Herald Ross disagrees with Trump “specifically on the rhetoric around race. … Stephen’s record on racism speaks for itself. It is possible to support someone in the basis of some things and not agree with everything about them.”

Bomani Jones pointed out the similarity:

serious question: did this source send a mass text, and that accounts for the same exact quotes in two stories? https://t.co/ksaABEWLoJ

Dan Steinberg then collected the relevant sections, finding it in the aforementioned ESPN story, as well as stories from three Florida papers:

A source familiar with Stephen Ross's thinking is so familiar with it that four different outlets (ESPN, Sun-Sentinel, Miami Herald, Palm Beach Post) wound up with the same quote (via @bomani_jones) pic.twitter.com/6Yu7BUGndn

Interestingly, three of the outlets (ESPN, the Sun Sentinel, and the Palm Beach Post) have updated their stories with the Ross statement while removing the unnamed source’s quote, with no evidence of an update. The Herald story has been updated, but the quote remains intact.