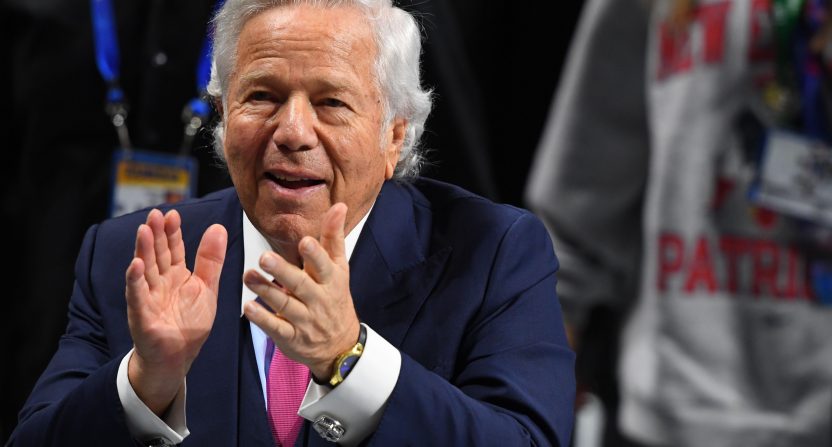 Patriots owner Robert Kraft getting caught up in a prostitution sting was always going to inspire a lot of media interest, for reasons both good and obvious.

Along with that interest came a surprisingly (or, perhaps, unsurprisingly) large number of very bad thoughts, opinions, attempts at humor, and more. The stakes were raised further once it became apparent that this was being investigated as a human trafficking case, with some horrific details among the reported allegations:

From the Tampa Coast Palm:

Li and Zhu were arrested on charges including racketeering, deriving support from the proceeds of prostitution, engaging or maintaining a place of prostitution and money laundering.

“It was clear that multiple women were working and living inside the spas. They were cooking on the back steps of the business,” Snyder said. “They were sleeping in the massage parlor on the massage tables.”

They had no access to transportation and were moved from location to location, Snyder said.

Here, though, are some of the worst takes of the day, starting with Stephen A. Smith via The Big Lead:

“Now if you believe that a crime has been committed as it pertains to him dating someone considerably younger than him, then clearly he’s guilty of that.”

“As the evidence flows in, we will be in a position to comment on it …”

“So they are saying that an act was committed, they are acknowledging that it was consensual, so the issue here is solicitation inside of the spa. How do we know it wasn’t somebody he wasn’t with on numerous occasions?”

“You know something ladies and gentlemen, there are things that I want to say, there really is. This is one of those situations where it is strongly advisable for Stephen A. Smith to shut up. … But when you are talking about two consenting adults deciding to engage in dare I say extracurricular activity and somehow, someway that is a crime? [inaudible scream] I need to be quiet … I think I need to shut up about this.”

Here is the audio of Bart Scott saying that the #Patriots should lose ALL of their draft picks in light of the charges against Robert Kraft.#WFAN pic.twitter.com/xOKmhDoqQg

While that would certainly be satisfying to just about every non-New England fan, there’s clearly no chance of that happening. Let’s spin the wheel of bad takes once again and…ah, we’ve landed on Jason Whitlock!

Yes, I'm making a specific inference about a 77-year-old billionaire who hangs with rappers and dances on stage with Cardi B. Nowhere did I say EVERYONE who listens to Cardi B solicits prostitutes. https://t.co/Use3ZCchbl

And just when you think things can’t get worse, let’s welcome Barstool to the party!

And if you’ve ever done coke you’re indirectly getting people murdered by drug cartels https://t.co/f694IzEPyv

Fun stuff. And there’s plenty more out there!

Anyway, this is probably going to go on for a while, and it’s an issue about which most people in sports media are very much uninformed. But because it’s now a take-based economy, even normally well-intentioned folks are going to put their foot in their mouth at various points. The sad irony: it’s only the well-intentioned people who are going to suffer any possible consequences.