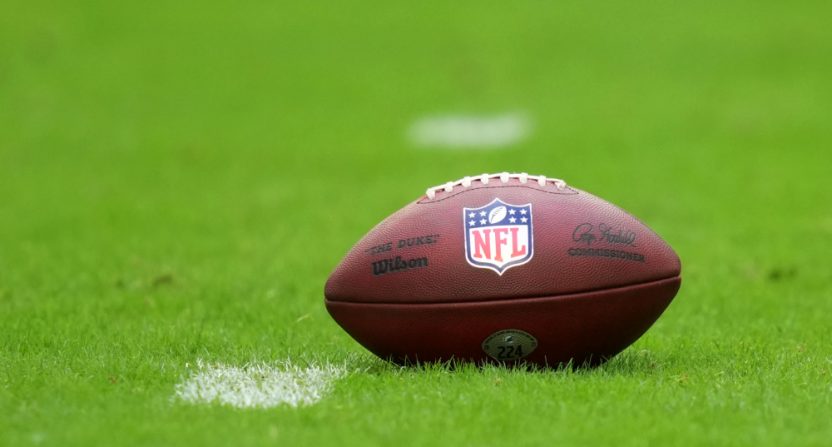 This we, we asked you, the loyal readers of AA to grade 17 (our most ever!) NFL broadcast teams that called games during the 2022 season. We then tabulated and weighed all of your grades on the four point scale (a 4.0 was the highest possible score. A 0.0 was the lowest). No voter’s opinion was given more or less significance than any other (you, the reader, had as much of a voice as me, the writer).

Before we start, some factoids about the voting.

Click here for the full breakdown of the votes. 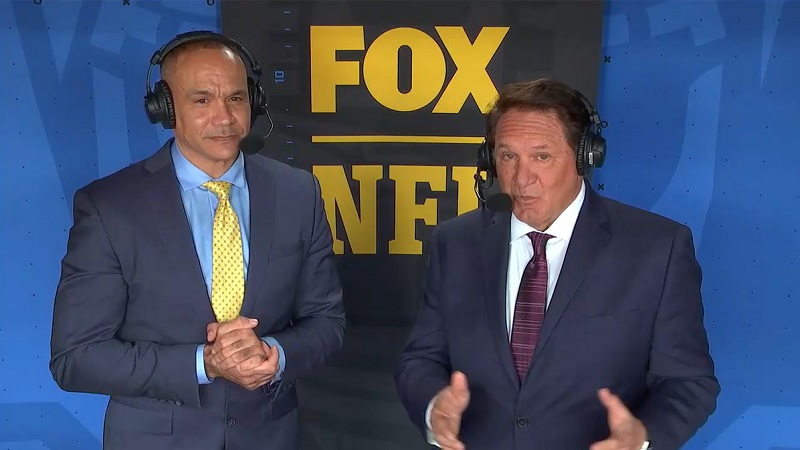 Most common grade: C (43.70% of votes)
Previous scores: N/A (Myers, Brock Huard, and Greg Jennings scored 2.09 in 2020)
Previous rankings: N/A (Myers, Brock Huard, and Greg Jennings ranked 13th of 15 in 2020)
Breakdown: Robert Smith was the fourth NFL broadcast partner of Chris Myers in the last three seasons (Brock Huard and Greg Jennings in 2020, Daryl Johnston in 2021). That’s not fair to Myers, and it’s not fair to Smith either. Smith has been a fine studio analyst over the years, and most of his game work has been in the college football world. It might make sense for Fox to switch him back next fall, but do they really want to give Myers *another* new partner? 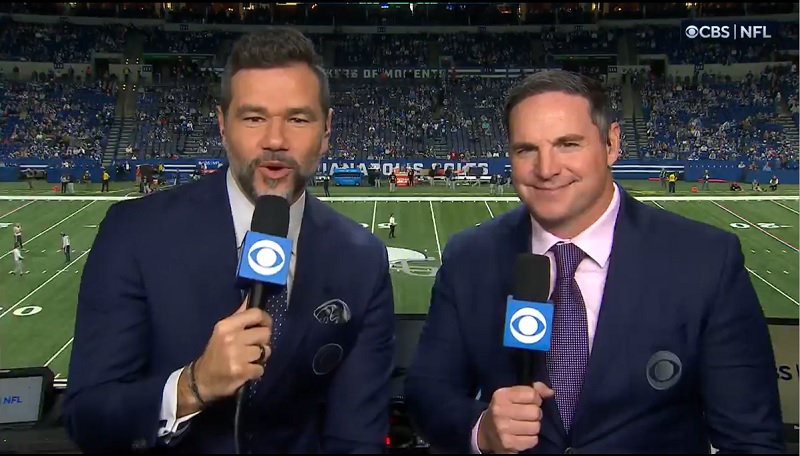 Most common grade: C (37.21% of votes)
Previous scores: N/A (Levy, Riddick, and Brian Griese scored 2.51 in 2020)
Previous rankings: N/A (Levy, Riddick, and Brian Griese ranked 8th of 15 in 2020)
Breakdown: So, going from one quarterback in Brian Griese to another in Dan Orlovsky wasn’t a lateral move, huh? Griese had a lot more polish at game calling than Orlovsky, and it showed during the handful of games ESPN’s B-team called this season. It’ll always be tough for a network like ESPN, which doesn’t have more than one game per weekend too often, to have a second broadcast team on part with its first one, but this is a pretty steep disparity. 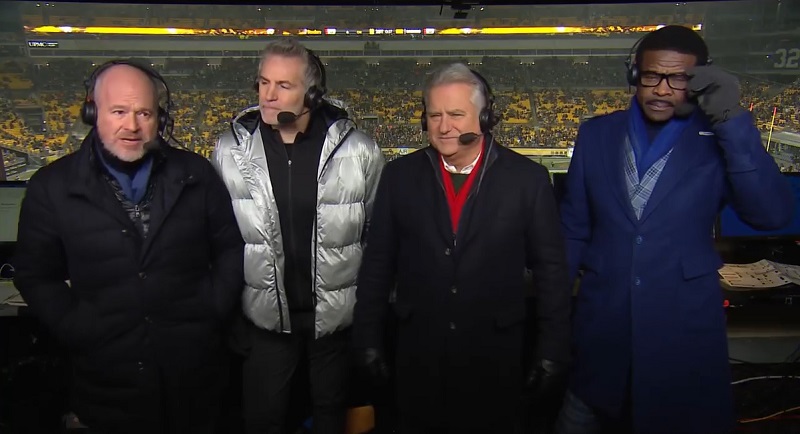 Most common grade: C (33.55% of votes)
Previous scores: N/A
Previous rankings: N/A
Breakdown: Remember when Too Many Cooks was a thing? Yeah, that’s this booth. Three people calling a game is too many, let alone four. These four have good chemistry together, so having them call a game seemed on paper like a good enough idea, but it would work a lot better as an alternate broadcast. That way, it could be a lot more loose, fun, and less focused on the play by play action on the field. Anyway, just a thought. Please don’t have four people call one game in the booth. 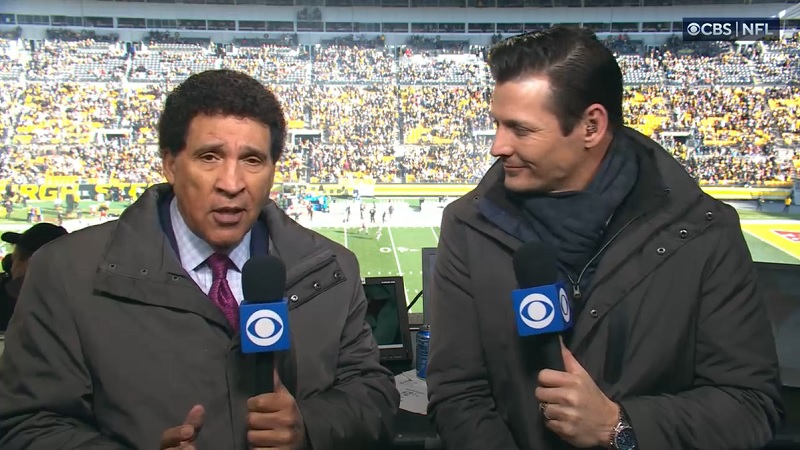 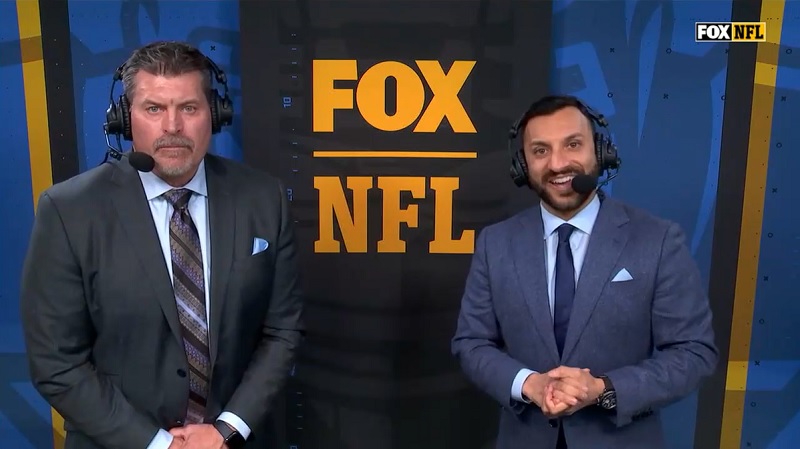 Most common grade: B (38.15% of votes)
Previous scores: 2.30 (2020)
Previous rankings: 11th of 15 (2020)
Breakdown: I like Adam Amin, and I like Mark Schlereth, and I don’t think I’m crazy in saying that this team just hasn’t ever done it for me. I like Amin, I though Schlereth’s studio work at ESPN several years ago was strong, but together in the booth, something is missing. Compared to two years ago, their grade slightly improved, and their ranking stayed the same (slotting in two new teams below them). 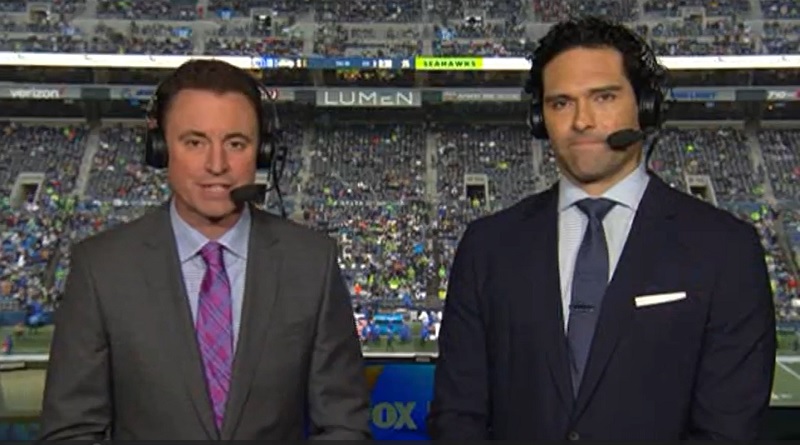 Most common grade: C (38.37% of votes)
Previous scores: N/A (Kugler and Chris Spielman scored 2.38 in 2020)
Previous rankings: N/A (Kugler and Chris Spielman ranked 10th of 15 in 2020)
Breakdown: I’ve been a big Kevin Kugler guy after hearing his work on BTN over the years, and his work with Mark Sanchez this season has been alright. Sanchez almost has too much energy, and really needs to dial it back a bit. This team still has plenty of room to grow. 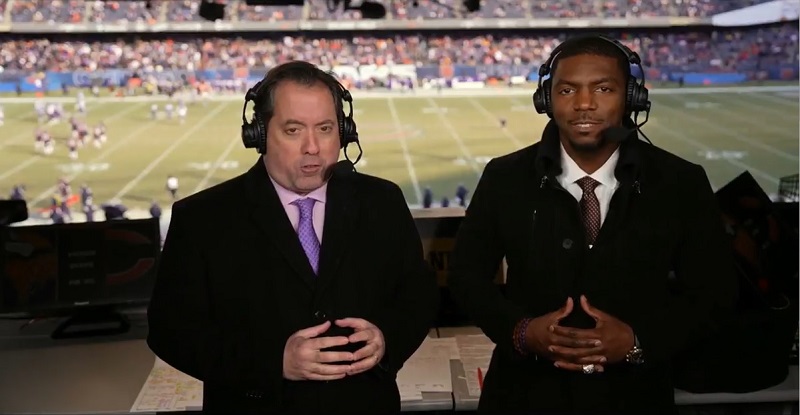 Most common grade: B (41.63% of votes)
Previous scores: 2.41 (2020)
Previous rankings: 9th of 15 (2020)
Breakdown: Kenny Albert is a broadcaster you want to stick with a younger analyst like Jonathan Vilma. In their third year together, there were signs of improvement, though Vilma is still a little rough around the edge. Like Mark Sanchez, he has the smarts and the energy to be a solid broadcaster, and he’s in the right place with the right partner to continue becoming better. 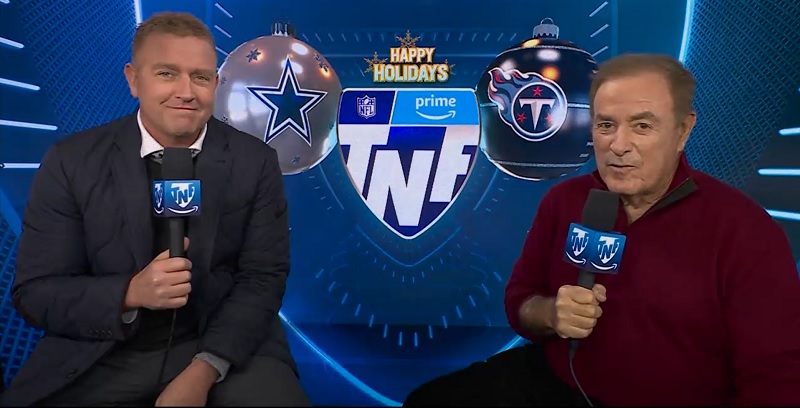 Most common grade: B (40.76% of votes)
Previous scores: N/A (Michaels and Cris Collinsworth scored 3.28 in 2018, 3.36 in 2019, and 3.51 in 2020)
Previous rankings: N/A (Michaels and Cris Collinsworth ranked 2nd of 15 in 2018, 2nd of 14 (2019, and 2nd of 15 in 2020)
Breakdown: Amazon’s exclusive Thursday Night broadcasts this season felt like NFL broadcasts as opposed to some sort of sideshow event. But the broadcast team of Al Michaels and Kirk Herbstreit didn’t always hit the high notes. They were working together for the first time after years with other partners (and in Herbstreit’s case, calling college football), and the pair just didn’t mesh well. A TNF schedule with some shocking low points didn’t help matters either. 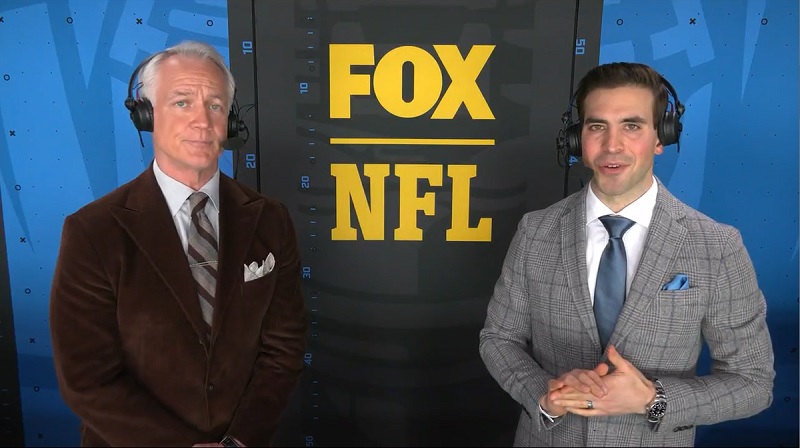 Most common grade: B (45.21% of votes)
Previous scores: N/A (Johnston and Kevin Burkhardt scored 3.12 in 2020)
Previous rankings: N/A (Johnston and Kevin Burkhardt ranked 5th of 15 in 2020)
Breakdown: I feel like I say this every year, but Daryl Johnston might be the most underrated analyst in sports. Fox can stick him with any partner, and he can help enhance the booth. Before he did it with Joe Davis, he did it with Kevin Burkhardt, and who knows if he’ll do it with another broadcaster down the line? Davis is a far better baseball broadcaster than a football one, but he’s young enough that he should be able to improve with more reps and more restraint in the booth during football games. 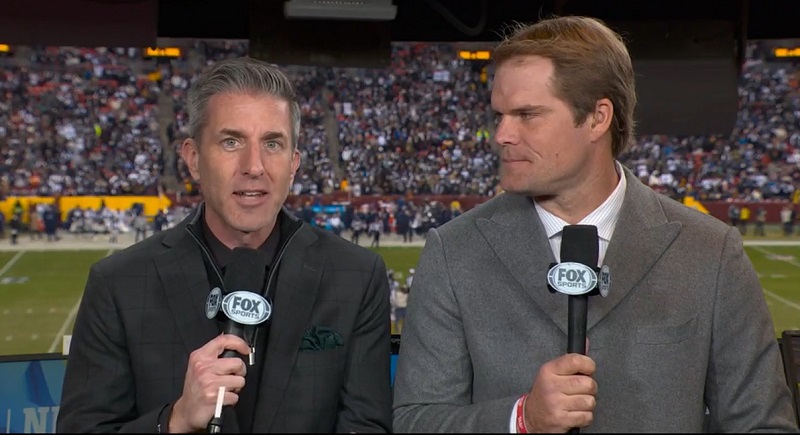 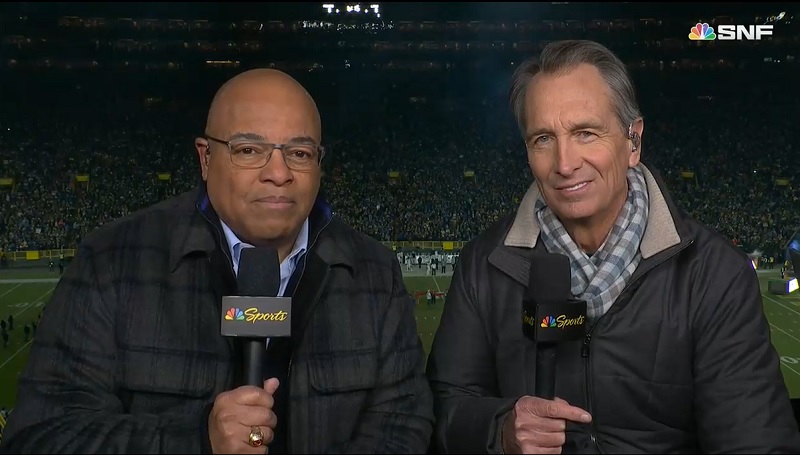 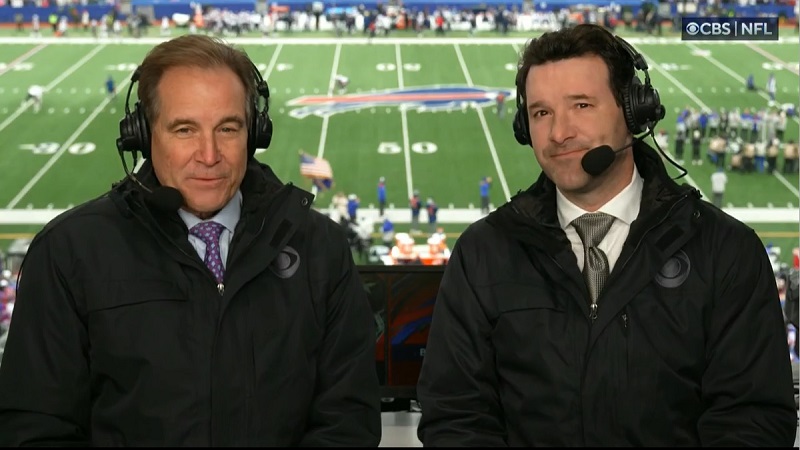 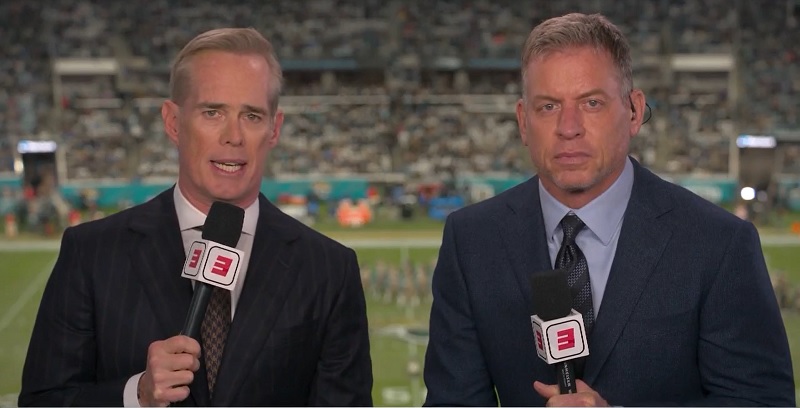 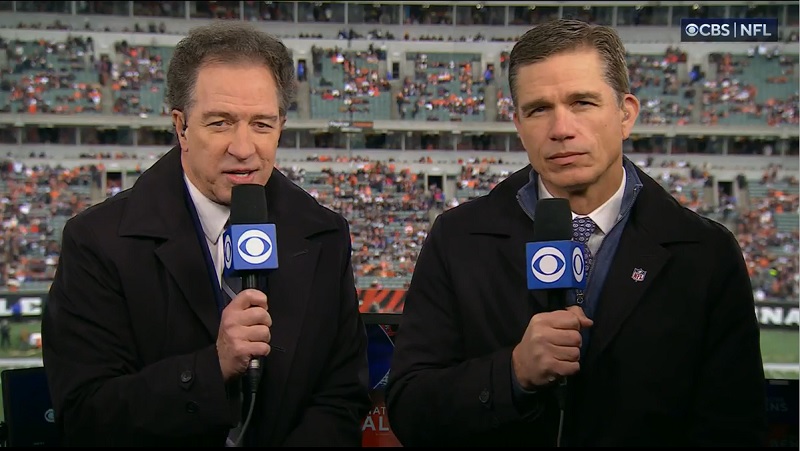 Most common grade: A (46.07% of votes)
Previous scores: 3.29 (2020)
Previous rankings: 3rd of 15 (2020)
Breakdown: Kevin Harlan has been so good for so long and I feel like we’re taking his work for granted. His weekly broadcasts with Trent Green, who continues to grow as an analyst each year, are a delight, even if the pair is usually calling the third-choice AFC game. Their score slightly dipped from two years ago, but declines ahead of them resulted in the pair moving up a spot. 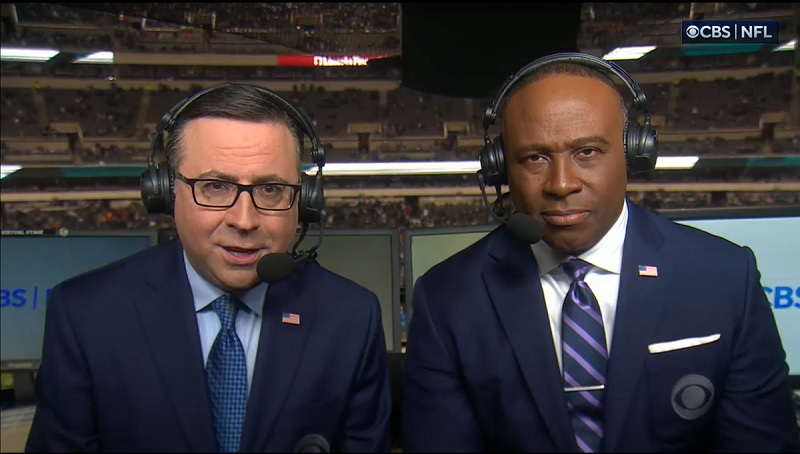 Most common grade: A (51.26% of votes)
Previous scores: 3.28 (2020)
Previous rankings: 4th of 15 (2020)
Breakdown: For years, Ian Eagle and Dan Fouts were a fan favorite broadcast team. We were disappointed when Fouts left, but Charles Davis has more than adequately replaced him after leaving Fox and pairing up with Eagle. The chemistry between the two is excellent, and their broadcasts are both entertaining and informative. And while their grade didn’t improve all that much from two years ago, when combined with changes and overall decline in other highly rated teams, this is your highest-ranked NFL broadcast team for the 2022 season. It’s a worthy and deserved honor.