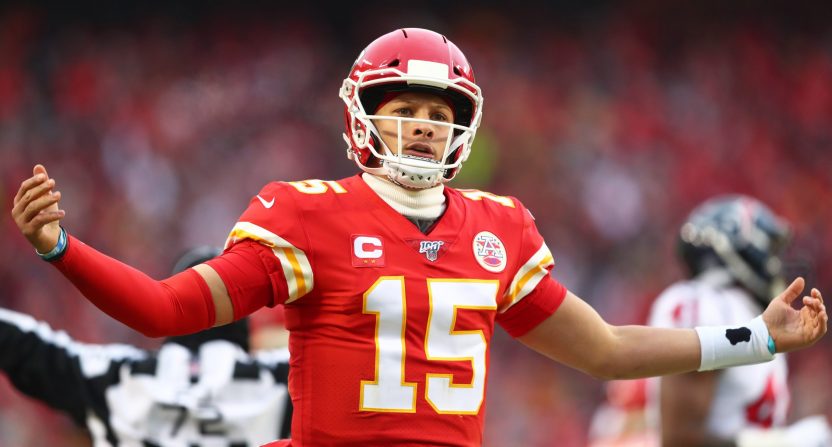 The top 100 NFL players of 2021 have been slowly revealed throughout August, with the definitive top 10 revealed by NFL Network on August 23rd. If you had bets going for who would be where in the list, take a look at the results below to see if you were right. If you think any of these guys can lead their team to the championship this season, make sure to check out the odds on BetOnline!

Buffalo Bills quarterback Josh Allen has had a meteoric rise from where he came from. From the draft prospect to be laughed at, to a serviceable rookie starter to a solid second-year professional and finally to MVP for three seasons in the NFL.

And his ranking reflects it. In 2020 Allen was considered only good enough for 87th place, and now, miraculously, he’s in the top 10.

Cleveland Browns defensive end Myles Garrett can say he’s had 12 sacks in 14 games this season, in which he demonstrated his ability to mow down anything in his way. He has been called a “game-changer” and possible Defensive Player of the Year candidate.

Seattle Seahawks quarterback Russel Wilson played loose and free early in the last season and gave everyone a reason to whisper the words “MVP” about this year. His low place in the top ten despite being an amazing player appears to be due to his “cooling down” period during the stretch. He can perhaps gain a better place next year if he regains that fire in his belly.

Green Bay Packers wide receiver Davante Adams has been described as “indisputably the best player in the position entering 2021” due to his being named the highest graded with 92.2 and most productive, running an average of 2.96 yards per run.

Most of all, no other player has managed to beat his recorded touchdowns since PFF started tracking single coverage data. Adams is an invaluable member of the Green Bay Packers and the NFL in general and has already risen substantially from number 57 into seventh place.

According to the betting, this year’s snub for Defensive Player of the Year Award, Pittsburgh Steelers linebacker T.J. Watt lost to our number one choice Aaron Donald in 2021. Watt has been described as “dangerous” “freakish” and “visiting from another planet” when talking solely about his performance on the field.

Although, someone is noticing this talent since Watt has advanced a solid 17 places from last year’s designation of 25th and into the top ten.

The only tight end player on this list, Travis Kelce boasts a 2,639 receiving yards after the catch over the past five seasons are over 400 yards more than any other tight end or wide receiver in the NFL. He has a knack for getting open, which, when paired with that after-the-catch talent makes him the most formidable player in his position.

The Kansas City Chiefs player has snuck into the top ten from 18, but how far will it go? Can he get the top spot?

Brady is definitely the person most well-known on this list. He has sat at the top spot three times already, in 2011, 2017 and 2018. After his shocking fall to 14th place last year, the quarterback seems to have redeemed himself by crawling back up to fourth place.

After a tumultuous relationship with the Green Bay Packers, it seems quarterback Aaron Rodgers has decided to stay with the team that made him, and that’s good news for them. His competitive nature and talent for being the fasted player to get 400 passing touchdowns have made him a two-time league MVP.

However, his history with the sport is filled with ups and downs. Last year’s down was to drop to number 16, but this year’s up is seeing him get into the top ten at third place.

If Los Angeles Rams player Aaron Donald had moved up just one more space that he needed to wear the crown of NFL’s number one player, it would have been his second stint at it. The defense player from Pittsburgh College can already say he has won in 2019, so it will make a good consolation price for missing out this time.

As we get higher in this list there is a definite shift from players that can improve to players that are looking to keep a hold of their former glory. No one on this list was last year’s winner, that honor goes to Baltimore Ravens quarterback Lamar Jackson, who this year has dropped 23 spots, leaving the number one spot to be coveted by all the players on this list. But if last year’s ranking is anything to go by a clear rivalry can be seen between Donald and Mahomes.

The quarterback seems to be going from strength to strength, winning Super Bowls and signing $503 million contracts in 2020 alone. With the Chiefs thought to be gunning for their third consecutive Super Bowl in 2022, we will no doubt see a massive contribution from Mahomes in their plays and strategies.

These are the 10 best players in the NFL at the moment. Watching their careers unfold has been nothing short of a pleasure, and we shall hopefully see some great things from them in the future. Regardless of the team you support, keeping an eye on these players and their performances will help you see some examples of football as it should be played! It would be great to see these players one day counted among the very best in the sport.