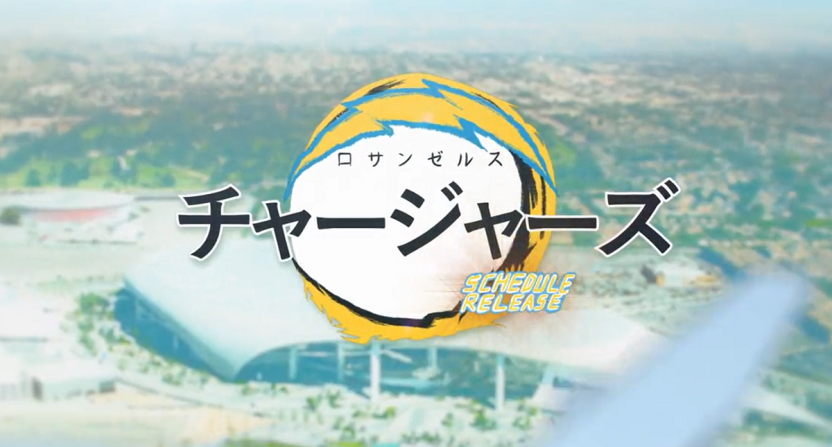 If you’ve somehow missed it so far, please watch the schedule release video from the Los Angeles Chargers.

NFL schedule-release day has turned into a bit of a competition between teams to see who can pull off the most creative release. They don’t all pull it off, but this year the Chargers managed to justify the entire thing not just being done in one emailed press release thanks to this anime-inspired run through their upcoming seventeen regular season games.

Should we REALLY make our schedule release video an anime?

That’s just impossibly good, with so, so many details that require repeat viewings to catch. The Urban Meyer parody caught a lot of attention, but the Mina Kimes shoutout in the Seahawks graveyard is also choice. As is the Colts QB carousel featuring one horse with a bolo tie in a nod to former Charger Philip Rivers.

It works on a comedic level (it doesn’t linger on any of the jokes for emphasis, which in addition to the willingness to poke fun at other franchises at a level we don’t usually see from a team really makes the whole thing work) and a visual level.

Today, though, the public learned maybe the craziest fact behind the making of the video: it was all done in-house.

By the way the animator behind that incredible @chargers schedule release video actually works for the team. They did that all in house.

Shout out to the legend @FriendlyCordova for creating that masterpiece.

Pulling that off entirely in-house is absolutely amazing. Andrew Córdova pulled back the curtain on the project, noting that while he did do a fair bit of animation for the video, he also used existing works for tracing purposes, which was probably essential to actually get this kind of video done on a reasonable budget and within the required time-frame.

I'm not a pro animator or at least that's not my core competency, doc-feature storytelling and editing is, but I do know that career animators do original animation, not tracing, so RESPECT to all the original japanese animators from their respective studios! ?

Exactly, love Haikyuu and the work the real animators at Production I.G did.

The show perfectly captures the camaraderie of a team and the exhilaration of competition, one of my favorite stories all-time.

We also learned which music was used:

The only downside here is that next year’s expectations will be through the roof. The NFL’s schedule release is treated as a big deal, a way to take headlines away from the NBA and NHL playoffs (and MLB regular season) during a portion of the calendar that doesn’t have much else happening for the NFL. The television ratings last night might suggest that, in fact, it’s not as big of a deal as the league makes it out to be.

Unpopular take that the ratings support: the NFL Schedule release show is NOT a made-for-TV event.

The popularity of the Chargers video, though, suggest something else: that it’s a made-for-social media event. In that sense, in terms of engagement and attention, the league is absolutely winning over an audience, thanks in large part to creativity from talented people on team staffs across the league.

This year, though, the Chargers might as well start their season 1-0, considering the W they already have.