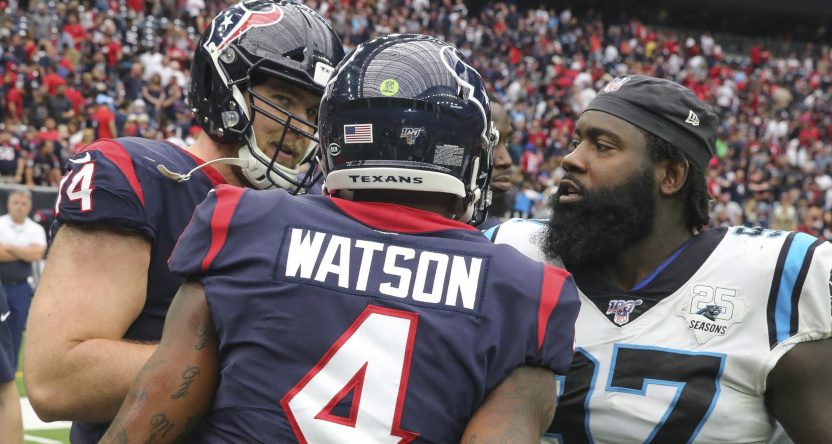 The Houston Texans not only lost on the field Sunday, they lost in the local ratings as well. As David Barron of the Houston Chronicle writes, the Texans’ 16-10 afternoon loss to the Carolina Panthers on Fox drew less viewers than the Dallas Cowboys’ 12-10 loss to the New Orleans Saints on NBC’s Sunday Night Football, and part of that is about the ongoing Dish-Fox dispute (Houston Fox affiliate KRIV is an owned-and-operated affiliate, so it’s one of the many local Fox stations not currently available to Dish or Sling TV customers). Here’s more on that from Barron’s piece:

The Texans’ loss to the Panthers produced an 18.7 Nielsen rating on KRIV (Channel 26), meaning it was viewed by about 436,000 of the area’s 2.33 million television households on average. The Cowboys-Saints game Sunday night turned in a 19.8 rating on KPRC (Channel 2) with an average audience of about 461,000 households.

Channel 26’s audience undoubtedly was affected by Dish Network having dropped Fox Broadcasting’s owned-and-operated stations last week as part of a retransmission rate dispute. The game also aired opposite the final Astros regular-season game, which began at 2 p.m. and drew a 5.0 Nielsen rating, and both the Cowboys and Saints also have strong regional audiences in Houston.

Still, it’s unusual for an NFL team’s game not to be the highest-ranked program of the day in its local market.

It’s unusual indeed. This isn’t necessarily a huge long-term blow for the Texans, though, or a sign that they’re clearly #2 to the Cowboys in their own city. The confluence of the Dish carriage dispute, an Astros’ game, and a prime-time matchup with appeal to the Houston market isn’t going to happen every week, and the household difference here is significant, but not massive. And as Barron noted on Twitter in conversation with Robert Seidman of Sports TV Ratings, the carriage dispute in particular feels like a big part of this:

As to @SportsTVRatings' first point, the #Astros telecast, which began at 2 p.m. CT, did a 5.0 rating and undoubtedly clipped a few tenths off the #Texans' audience. @dish issue was likely a bigger factor, though. https://t.co/Evy9SeuvaY

And that’s part of what’s so interesting about this carriage dispute. It’s rare to see disputes that actually affect many NFL games (as most of the real long-running carriage disputes have been centered on cable networks), but there have been a couple in the last while, and Dish has been involved in some of those. Dish customers in 14 big markets missed last year’s Cowboys-Chargers Thanksgiving game on CBS, and an October 2010 dispute saw Dish customers miss several weeks of Fox programming, including World Series and NFL games. (Fox also had a several-week dispute with Cablevision that month.)

Lots of disputes threaten lost NFL programming, but many of those see an agreement worked out at the last minute (see ESPN-AT&T). This one’s already seen lost NFL games. And with the rhetoric and ads flying around here, this may not be resolved any time soon. And given all the affected Fox owned-and-operated stations out there, including many in prominent NFC markets,  and given the numbers of Dish and Sling customers (estimated at a combined 12 million in July) that could wind up having quite the effect on local NFL ratings this season.