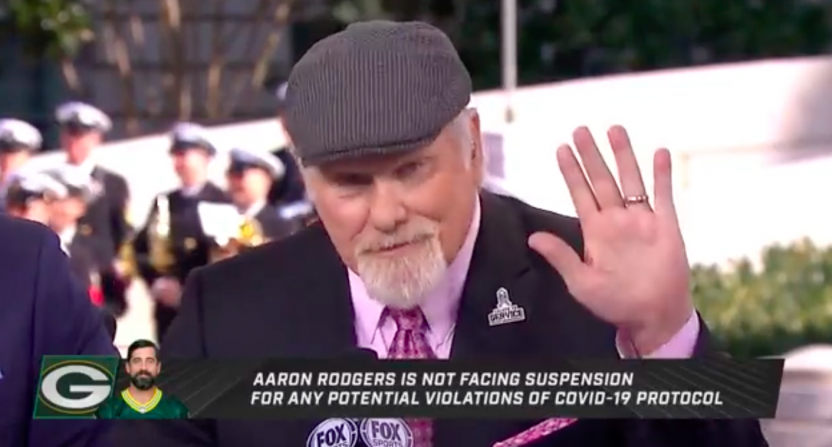 On Wednesday, it was reported that Green Bay Packers quarterback Aaron Rodgers had tested positive for Covid-19. At that point, it was also reported that he would have to serve 10 days in quarantine before rejoining the team because he was not actually vaccinated. Back in August, Rodgers had implied that he was when asked about being vaccinated and responding, “I am immunized.”

The drumbeat for answers got loud in a hurry and Rodgers answered them in a sprawling diatribe on The PatMcAfee Show on Friday, citing the “woke mob,” “cancel culture,” and saying things like “my body, my choice.”

While Rodgers likely made some new friends in certain circles, it was a PR nightmare for the NFL as well as a major disappointment for those pushing others to get vaccinated during a pandemic that has claimed over 750,000 American lives.

While Saturday brought with it the requisite SNL satire of Rodgers, Sunday brought in the NFL pregame shows, full of former coaches and players eager to chime in about what they think of Rodgers and his behavior.

Our crew offers their thoughts on the events that unfolded around Aaron Rodgers this past week.@JayGlazer | @curtmenefee | @michaelstrahan | @JimmyJohnson pic.twitter.com/kKeF9NUiFG

Over on Fox NFL Sunday, Jay Glazer opened the segment reporting on news that the NFL sent officials to Green Bay to speak with team officials about whether or not any Covid-19 protocols had been violated. He noted that Aaron Rodgers is not facing any kind of suspension, but he and the Packers could face fines.

After that, the segment was pushed over to the studio team, which was broadcasting live from the United States Naval Academy in Annapolis, Maryland. Jimmy Johnson started by saying while he can “respect his attitude towards being an individual,” football is a team sport and he’s “disappointed in [Rodgers’] play on words” and “disappointed for his selfish actions.”

Howie Long was next, also beginning from a place of agreement, saying he agrees with Rodgers “when he says what I do with my body is a personal decision.” But, he continues, “it ceases to be a personal decision when you take part in being part of a football team. In a building with coaches, players, trainers, equipment managers…and you run the risk of taking something home to your wife, your children, your grandchildren.” He also cited that Rodgers jeopardized the Packers’ chance at home-field advantage in the playoffs.

Bradshaw, the four-time Super Bowl-winning quarterback, dispensed with the pleasantries and said, “I want to give Aaron Rodgers some advice. It would have been nice if you’d have just come to the Naval Academy and learned how to be honest. Learned not to lie.”

Following loud cheers from the servicemen and servicewomen around the set, Bradshaw continued, saying “because that’s what you did, Aaron. You lied to everyone. I understand immunized. What you were doing is taking stuff that would keep you from getting Covid-19. You got Covid-19. Ivermectin is the cattle de-wormer. Sorry, folks, that’s what it is.

Michael Strahan wrapped things by adding that “there’s a time to quote Martin Luther King and this was not one of them,” alluding to the fact that Rodgers did so in service of his beliefs about vaccinations. Stahan then described how it felt like a “work-around” the way that Rodgers said he was immunized to imply he’d be vaccinated. “It’s deceptive and it’s wrong.”

Rodgers is historically very persnickety about the way he’s portrayed in the media. But after Friday’s interview, that portrayal has taken a very stark turn and he is going to have to get used to these kinds of harsh statements about his character. Given what we know about Rodgers, he’s probably gearing up to talk more this week thinking that might solve the issues, but we all know that’s only going to make things worse and give media members even more ammo to work with.