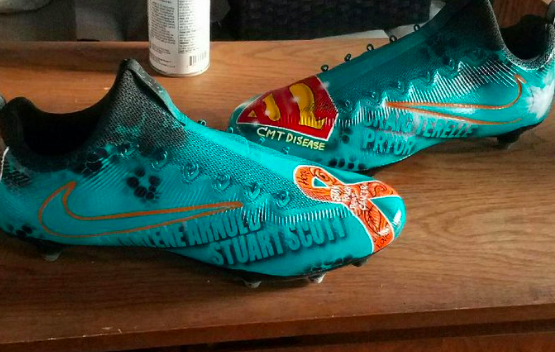 The NFL has been highly criticized for many of its decisions of late, but allowing teams that were on bye week to participate in the “My Cause, My Cleats” campaign is a good move.

Cleveland Browns wide receiver Terrelle Pryor is one of the players taking advantage of the opportunity, and is honoring a unique group of people. Before Sunday’s Browns game against the Bengals, Pryor will wear cleats that bring awareness to the Special Olympics. And during the game, he will honor his grandma, his father, and the late sportscaster Stuart Scott.

Pryor’s grandmother passed away from cancer, and his fatherr Craig passed away after a five-year battle with a rare neurological disorder Charcot-Marie-Tooth disease (CMT).

Scott, who passed away at the age of 49, was widely admired by those on and off the field. Scott helped launch ESPN2 back in 1993 and became a mainstay in a lot of homes. His catchphrases “Boo-Yah” and “cool as the other side of the pillow” were some of the biggest pop culture touchstones that ESPN has ever had the pleasure of airing.

Scott’s fight against cancer became a battle that employees of ESPN monitored closely, but that fight also began to leak into the day-to-day lives of the viewers as well. Scott was a compelling figure and always was positive despite his illness. Clearly he’s been a big influence on Pryor, and these cleats serve as a very cool tribute.