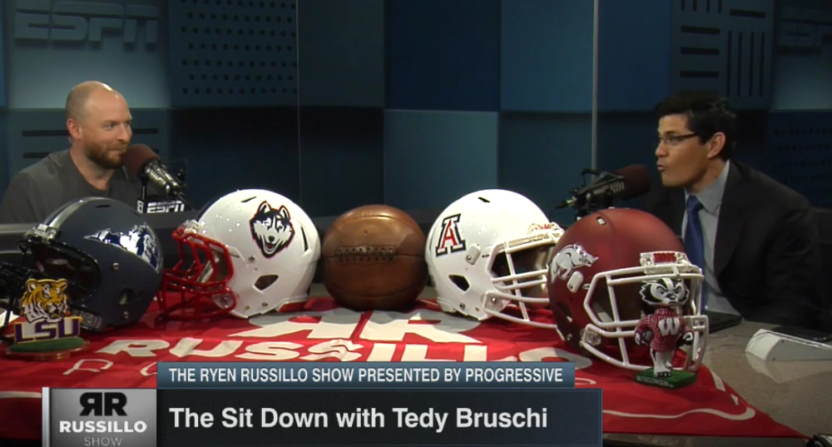 The well-discussed story of how Tom Brady took over from Drew Bledsoe as the New England Patriots’ starting quarterback in 2001 received an interesting twist Thursday, with former Patriots’ linebacker and current ESPN analyst Tedy Bruschi telling Ryen Russillo his part in it.

On The Ryen Russillo Show, Bruschi said he was going to tell a story he’d never told publicly, and it wound up being about how he accidentally broke Bledsoe’s finger after a practice while Bledsoe was coming back from the sheared blood vessel he suffered in Week 2 following a hit from New York Jets’ linebacker Mo Lewis. Here’s the start of Bruschi’s story:

“I have never told this story, bro, but you just sparked it in my mind. I’m walking off the field, practice is over, and that’s when Drew, he wasn’t getting like real reps, you know? So he would go and get reps in with the receivers, with the backup receivers, and make sure his timing was still there and everything. And I knew that hit was still on his mind, right? So there was this one, he dropped back, and…”

Here’s the next part of the story:

“He was like dropping back into us, and I sort of got in front of him, like ‘Augh!’, to give him a sense of ‘Here comes the rush.’ Drew threw the ball, and his finger hit my thigh, and it broke his finger. That’s how he broke his finger! Because I was messing with him. And he threw it on his follow-through, I think it was his throwing finger.”

And the end of the story, where Russillo asks Bruschi if he thinks that changed history:

“Do you think then, had you not been part of him breaking his finger, he comes back earlier and then this Brady thing never happens? Was it because of you, Bruschi?” “No, no, maybe it was an excuse, Belichick might have thought ‘Hey, he broke his finger, now he’s really out, so I’m not going with him.’ But I don’t think so. I don’t know, I don’t know, I don’t think it was a factor. But still, to have done that to a quarterback when you’re always programmed, ‘Stay away from the quarterback…'”

Bledsoe breaking a finger in 2001 appears to not have been widely reported at the time. He famously broke a finger in 1998 and played through it, but that was before Brady was drafted in 2000. It’s possible Bledsoe did break his finger again in 2001, though, especially if it happened after Bledsoe was cleared following eight missed games with a chest injury and Belichick opted to go with Brady anyway; at that particular point, it appears Bledsoe was healthy.

But it’s quite possible that Bledsoe broke his finger a few weeks later as the backup (which fits with Bruschi’s description of him looking for extra reps), and that it didn’t receive wide attention (or that it’s tough to find now, with most results about his finger pointing to the more-famous 1998 injury). That wouldn’t necessarily have been too important to Belichick’s decision, though, as he’d seemingly already chosen Brady for better or for worse by that point. Whether or not this Bruschi incident made any impact on Belichick’s decision to stick with Brady, it’s certainly an interesting story.