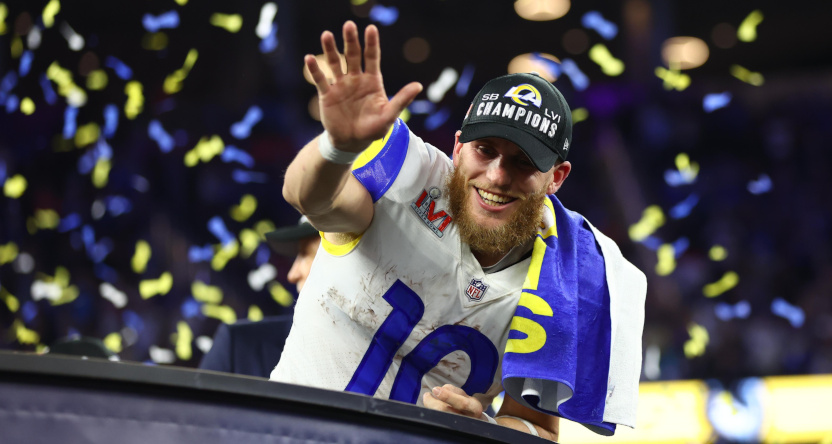 Most sports championship games have a MVP award, and that MVP award usually means a lot. A championship MVP award can trigger contract bonuses or be used in future negotiations, it can lead to huge endorsement opportunities, it becomes an early sentence in anything further written about the player (during or after their career), and it often becomes part of a Hall of Fame debate about them. Sometimes, it even comes with a truck with “technology and stuff.” And it’s often a popular prop bet as well. But with many of these championship MVP awards, the voting for them (usually from a select media panel) tends to be carried out significantly before the end of the game.

That may have been particularly notable with the Super Bowl LVI MVP award handed out Sunday. Rams’ WR Cooper Kupp (seen above after the game) was selected, but Rams’ DT Aaron Donald made the crucial game-ending play, getting hands on Bengals’ QB Joe Burrow and forcing a fourth-and-one incompletion. And that added to an overall strong game from Donald, who finished with two sacks, three quarterback hits, and four tackles. But although that final play was the most important one Donald made, and one of the most important plays the Rams made all day, it wasn’t considered towards the MVP voting.

How does that MVP voting work? In the NFL’s case, 80 percent of the vote comes from a panel of 16 members of the Professional Football Writers of America. The other 20 percent comes from a fan vote through the NFL website. But it’s that media vote that particularly matters,a and long-time NFL writer Charean Williams (currently with ProFootballTalk) noted on Twitter Monday that the votes here were collected ahead of the two-minute warning, opining that a post-game vote might have seen Donald selected instead:

Votes were due before the 2-minute warning. If voters had until the end of the game, I bet AD would have won it. https://t.co/rtT4f9hDwT

We’ll never know how a post-game vote would have gone. Kupp certainly had a remarkable game as well, making eight catches for a team-high 92 yards and two touchdowns. And he was crucial to the Rams’ late comeback, especially after they lost Odell Beckham Jr. (to what turned out to be a torn ACL). There’s at least a chance a post-game vote still goes in his favor. But the early collection of votes meant that Donald’s final series wasn’t considered. (And that certainly can hurt offensive players as well; some past MVPs have wound up with crucial final-drive considerations disregarded thanks to when the votes are collected.)

There is some historical rationale for why these votes have been collected early. (And this is not just a NFL thing; this happens at many championship games.) Most championship game MVP selections are made by a small panel of selected media, which makes sense; the wider panel of media for regular season MVP awards is better there, where there’s time to collect a lot of votes, but championship game MVP voting needs to be as quick and easy as possible. Media members involved in championship game MVP voting tends to have many other post-game responsibilities, some of which often involve going down to the field and/or the locker room, and that’s part of why these votes have often been done before people exit the press box to head to the field. League and TV officials also need to know the result of the MVP voting as quickly as possible so that presentation can be done on the broadcast.

And honestly, having ballots submitted at the two-minute warning isn’t bad by some standards. There have been some sports championships where that vote’s been held even earlier, meaning that even more of the game wasn’t factored in. But in a world where the technology (particularly, in-stadium WiFi and cell reception) is much better than it was even a decade ago, it feels like procedures could be changed to let a small panel like this make their MVP selections via phone from the field at the final whistle (or sport-specific equivalent), and not before.

Yes, it’s important to have a secure and trackable process for this, especially for later refuting incorrect claims about the voting. It’s also worth noting that online voting can lead to some errors (which is why this probably would be better as a “type out your selection, don’t pick from a list vote).  But in a world where a lot of awards voting is now done virtually, it feels it would be possible to set something up here where these votes could be collected when the game ends. And that feels especially doable when you’re only talking about a 16-person panel. The last few minutes of a game are frequently the most crucial, and it doesn’t seem right for them not to be considered in the MVP vote. Super Bowl LVI is just the latest case of that.