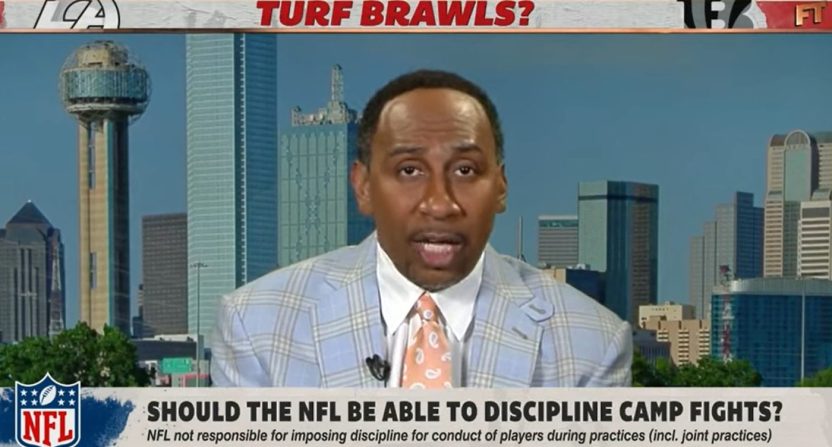 Multiple fights broke out during the Los Angeles Rams‘ joint practice with the Cincinnati Bengals earlier this week, the worst of which featured Aaron Donald swinging his helmet at opposing players.

After video of the incident was released, multiple NFL analysts called for Donald to be suspended. That evaluation of the situation that caused First Take’s Stephen A. Smith to question the motives of said reporters.

“Well I think it’s important to highlight what RC (Ryan Clark) just said. We got some fake-ass people in the media,” Smith declared. “Let’s just call it what it is. You got cats that played in the league and then all of a sudden, they get into this realm and they forget what transpired in that locker room and between those lines.”

Smith was referring to the following comments by Ryan Clark, which the former NFL safety and current ESPN analyst made on First Take.

“I saw what Geoff (Schwartz) tweeted yesterday,” Clark said near the start of First Take. “We start getting into where Adam Schefter is saying ‘assault,’ where all of these people are saying these things are criminal. To me, that puts these players in a position where you’re making them or you’re putting them in a category with people that rob, with people that steal, with people that assault, with people that commit domestic violence. And we have to be very careful when we start to toe that line.”

That’s fair analysis by Clark. Donald getting into a scrap on the field during a joint practice near the end of training camp should never be associated with players who commit reprehensible crimes off the field. Schefter claiming “assault” egregiously puts Donald in a category that he doesn’t deserve to be in. But saying Donald deserves a suspension, when the NFL rule book labels the helmet as a weapon, is not nearly as egregious.

Analysis of today’s brawl between the Rams and the Bengals on ESPN’s NFL Live: pic.twitter.com/WZked4ovG8

“A player must not use a helmet that is no longer worn by anyone as a weapon to strike, swing at, or throw at an opponent,” the NFL rule book states.

Despite the rule, the NFL will have a hard time punishing Donald because the league does not monitor player behavior at practice. If Donald’s actions took place during a game, he would without question receive a suspension. But Smith took issue with reporters calling for him to be suspended over something that occurred in practice.

“I appreciate the fact that RC reminded the world that when you’re labeling guys like that and accusing them of criminality with the verbiage that you use, that’s a problem,” Smith said. “And we should have a heightened level of sensitivity to that as Black men.”

First Take began its segment about Donald by reacting to a tweet from former NFL offensive lineman and current media personality Geoff Schwartz that called Donald’s helmet-swinging “out of control and dangerous.”

Fights happen. We know that and accept it. However, swinging a helmet is out of control and dangerous. He should be suspended https://t.co/5wVA7yeCPN

“When you got white analysts talking that way and using that language about Black dudes, that’s another level. And that’s why I appreciate RC bringing that up,” Smith continued. “I’m not accusing any analyst of racism or anything like that, I’m just telling them how we take it. Now what I want to do, if I’m looking at whoever sent that tweet out, I forgot his name, it was Schwartz or whomever, but it doesn’t matter. Whoever sent that tweet out and whoever thinks like that, now I want to see if you say that about the white dude that does it. Because if I don’t hear the same verbiage, if I don’t hear the same language if something like that happens with somebody white, now I’m looking at you with a raised eyebrow and saying, ‘what the hell you trying to say?’”

Smith specifically called out Schwartz for his tweet condemning Donald, in which the former NFL offensive lineman accused the Rams defensive star’s actions of being “out of control and dangerous,” warranting a suspension. But worse than Schwartz’s assessment, which has been shared by many, is Schefter accusing Donald of “assault.” I’m not sure if Smith realized it at the time, but his strong words seemingly questioned the intentions of ESPN’s lead NFL analyst.