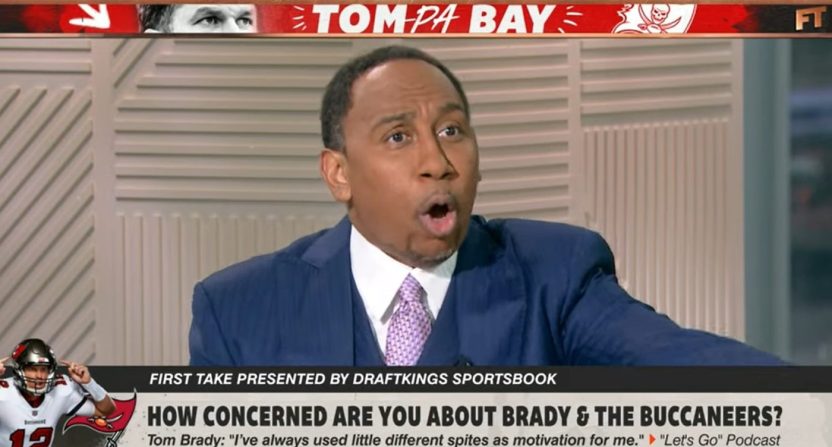 Brady, who abruptly stepped away from the Tampa Bay Buccaneers for 11 days during the preseason, has some people questioning whether the team can be a Super Bowl contender for the third straight season. Smith, however, won’t question the 45-year-old quarterback,

and claims he wouldn’t blame Brady for choosing to never speak with the media again over their doubt.

“It’s rare being a member of the fourth estate that I sit up there and I’ll say, you know what, ‘I don’t blame people if they never speak to the media again.’ I feel that way about Klay Thompson,” Smith said, explaining that the media cost Thompson $31 million by leaving him off the 2019 All-NBA Teams. “If he never spoke to the media again, I wouldn’t blame him. No. 2 might be Tom Brady.”

This offseason, Brady retired from football for 39 days, had impermissible communications about joining the Miami Dolphins while still under contract with the Tampa Bay Buccaneers, announced his comeback with the Bucs, signed a $375 million contract with Fox, and took an 11-day hiatus from training camp. If you believe it would be fair to at least question whether the 45-year-old quarterback is as committed to football as he once was, Stephen A. Smith would say how dare you.

“The level of ignorance that has been permeating through the media like a damn virus,” Smith continued. “This is the kind of stuff where if Tom Brady told everybody, kiss his you know what, I wouldn’t blame him.”

This is the same Stephen A. Smith who once said, “you have media obligations, they are a part of your contractual obligations,” in response to Naomi Osaka’s media boycott prior to the 2021 French Open. Smith did, however, praise Osaka’s decision to speak about mental health as she withdrew from the tournament. Brady has those same media obligations, and taking a vow of silence would be quite the stance, especially as he prepares to make a massive media transition with his looming Fox contract.

While rumors have circled about Brady’s personal life thanks to outlets like the New York Post, the media has been fairly respectful of the quarterback’s 11-day absence from training camp. Brady said “there’s a lot of sh*t going on” when asked about his absence. The response was vague enough to warrant follow-ups, but reporters accepted the answer and moved on from questioning him any further on the unprecedented absence.

Countless NFL analysts, reporters and fans have been burned by predicting Brady’s demise over the last decade-plus. Maybe Smith learned his lesson after watching his former First Take co-host Max Kellerman make the infamous “fall of a cliff” prediction about Brady six years ago. But Brady’s 39-day retirement and 11-day absence gave sports media the opportunity to cast doubt on the quarterback once again, without risk of being burned by an ignorant “fall off a cliff” hot take.