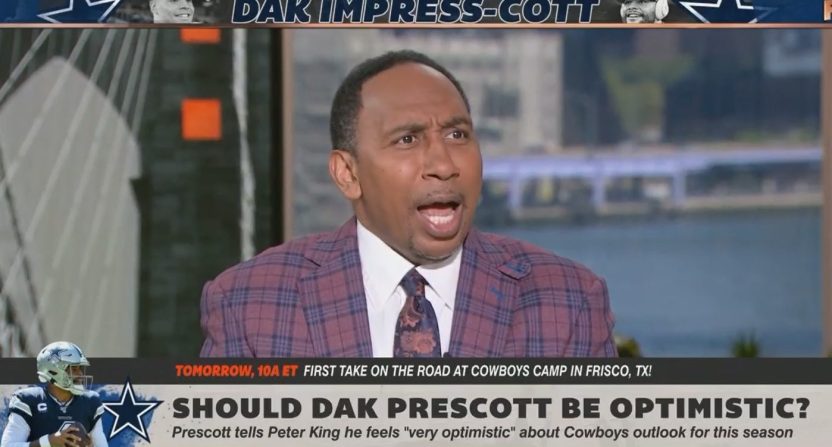 Much like Skip Bayless with LeBron James, everything Stephen A. Smith says about his loathed Dallas Cowboys should be taken with a grain of salt.

During Wednesday morning’s First Take on ESPN, Smith’s ire for the Cowboys was pointed at quarterback Dak Prescott. But this time, it wasn’t because of how he plays on the field, rather for what he says or doesn’t say off of it.

“Dak Prescott is the worst interview in sports,” Smith bluntly stated. “The most useless, wasted time interview in sports. He says the same thing every year! No matter what’s going on with the Cowboys. ‘I feel very confident in us, I think we’re gonna be very good.’ He gives no insight.”

To be fair, Prescott’s preseason assessment of the Cowboys echoes that of most sports fans and media, who repeatedly speak fondly of America’s Team every year before the season begins.

While Smith’s assessment of Prescott’s interview style may be harsh, the Dallas Cowboys quarterback would be hard-pressed to dismiss the hot take. Earlier this month at Cowboys training camp, Prescott admitted he studied Peyton Manning’s ability to evade questions during interviews.

“I’ve watched a lot of Peyton Manning interviews in my day,” Prescott said a few weeks ago on 105.3 The Fan in Dallas. “So I took some nuggets from him. Learned how to say a lot without saying too much, you know?”

If Prescott is essentially admitting that he tries his best to give mundane answers when speaking to the media, how can we condemn Smith for declaring it a “waste of time” to interview the Cowboys quarterback?

Stephen A. Smith is bringing First Take to Frisco, Texas on Thursday, August 24 to broadcast the show from the site of Dallas Cowboys training camp. And ESPN producers best not be approaching Dak Prescott about joining First Take for a segment.