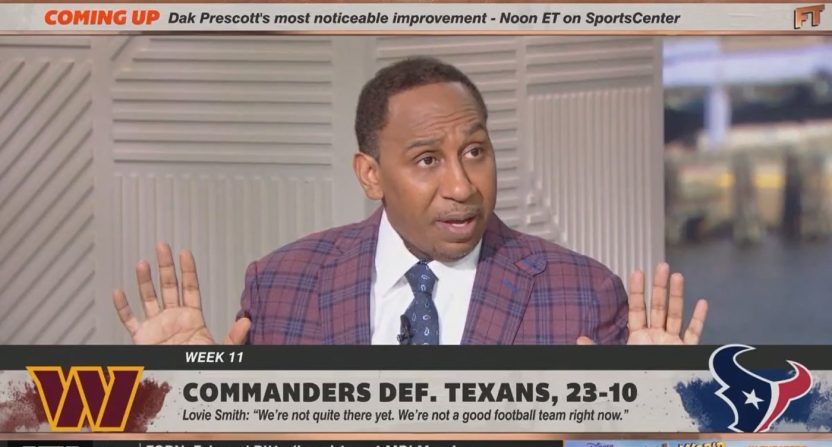 After the Houston Texans lost to the Washington Commanders Sunday afternoon, a reporter had an exchange with head coach Lovie Smith that caused Stephen A. Smith to raise an eyebrow on First Take.

Houston Chronicle columnist Brian T. Smith asked the Texans’ head coach about getting booed at home claiming it’s “been happening all year,” prompting Lovie Smith to push back. What followed was a brief and barely contentious exchange, as Smith was clearly frustrated by the losing and the columnist pressed the head coach about whether changes needed to be made on the field.

“I thought the reporter could have handled it better,” Stephen A. Smith stated Monday morning on First Take. “You’re there to ask questions and to get answers as opposed to confronting a coach or what have you. Now, sometimes coaches deserve to be confronted. What I mean by that is, if you’re asking questions and that’s what you’re doing and you’re giving a coach an opportunity to answer those questions, that’s fine. But when you come at him like ‘your answers are unacceptable,’ well who are you to say that?”

“You had an abundance of people who didn’t believe that Lovie Smith deserved the job and he’s probably one of those people, which is his right to feel…A lot of times I see stuff like that and I ask myself – and I don’t know the answer to this question – Did you do that to Bill O’Brien when he was there?” Smith continued on ESPN. “Did you do that to other coaches when they were there? Would you have done that to another coach with a similar record if they were not Lovie Smith?”

That certainly sounds like Smith is questioning the columnist’s journalistic integrity. Smith assumed Brian T. Smith doesn’t believe Lovie Smith deserves to be in his current position, and he later wondered if the columnist is treating the current Texans head coach with the same respect as his predecessors. All of this after an exchange that didn’t feel particularly tense.

“I’m not gonna condemn either side,” Smith added after appearing to condemn the journalist. “But based on the footage we saw, I would say that the reporter was a bit cantankerous unnecessarily.”