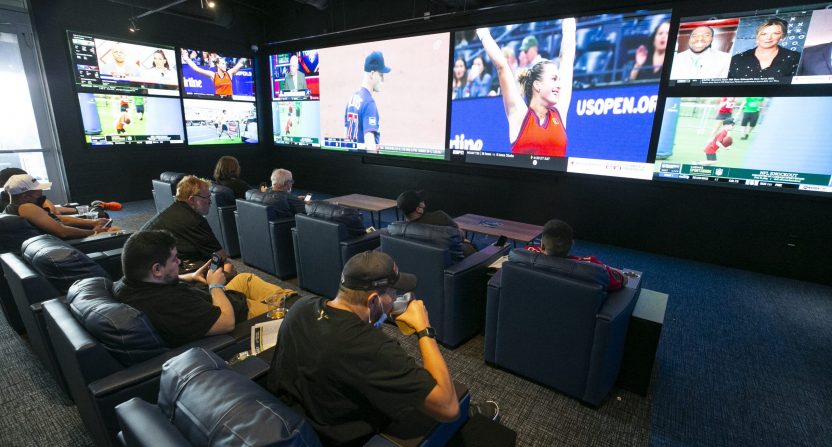 One of the most anticipated learnings from the 2021-2022 NFL season is just how much the sportsbooks and legalized gambling impacts the financial numbers for the league and their broadcasting partners. Based on the first week of the season, it looks like it’s going to do extremely well for their bottom lines.

The league’s sportsbook partners and advertisers bought 90 total advertising units across NFL games on CBS, Fox, and NBC this past week, spending $21.4 million in total, according to Sportico’s Anthony Crupi. The majority of the ads ran during nationally televised games such as Thursday Night Football and Sunday Night Football.

FanDuel was the overwhelmingly biggest advertiser, accounting for 42 in-game ads. In fact, they trailed only Geico, Progressive, and DirecTV in terms of overall ad units.

Does NBC know the future? pic.twitter.com/FwCqFHub1U

In case you’re curious who these advertisers think their NFL fan audience is on a granular level, 52 of the 90 spots aired on CBS, 27 aired on Fox, and 11 aired on NBC. There were no sportsbook ads during ABC and ESPN’s MNF telecast of the Ravens-Raiders game.

For those who remember the halcyon days of DraftKings and FanDuel ads running amok during NFL programming, that must seem like child’s play compared to now.

DraftKings, FanDuel, and Caesars Entertainment are all official sportsbook partners of the NFL. However, that still leaves the door open for other sportsbooks to advertise. BetMGM led the way amongst other sportsbooks as being the only other one who bought in-game advertising, dropping around $2.7 million for nine ads, seven of which aired during Sunday afternoon on CBS.

While there are still plenty of viewers who blush at the idea of gambling-centric ads during their NFL games, there’s no denying that this sector is only just getting started in terms of its value to the league and broadcasting partners. Since the Supreme Court struck down the Professional and Amateur Sports Protection Act in 2018, almost half of the U.S. population can now legally bet on sports in their state. That number is only going to grow with each year.

If anything, the concerns will be how to manage the messaging so that viewers are inundated with sports betting ads (although let’s face it, that hasn’t stopped alcohol and insurance companies). Right now, networks have been given the discretion to run up to six gambling ads per game, which usually comes out to one during pre-game, one per quarter, and one at halftime. Whether or not that changes over time as the sector grows remains to be seen.

As Crupi notes, even with those limitations, gambling was the sixth biggest ad category over the weekend during NFL programming behind insurance, cars, streaming services, quick-service restaurants, and wireless services. And while things may change and fluctuate, it’s a sector on pace to earn the league and its partners $400 million in revenue this season. Will higher ratings follow? We’ll see.

We already knew that local networks and RSNs were big winners when it came to sports betting ads. Now we know that success is going to carry through to everyone, at least for the foreseeable future. And in case you’re wondering why there’s so much new gambling-centric programming on ESPN and elsewhere, well, now you know.