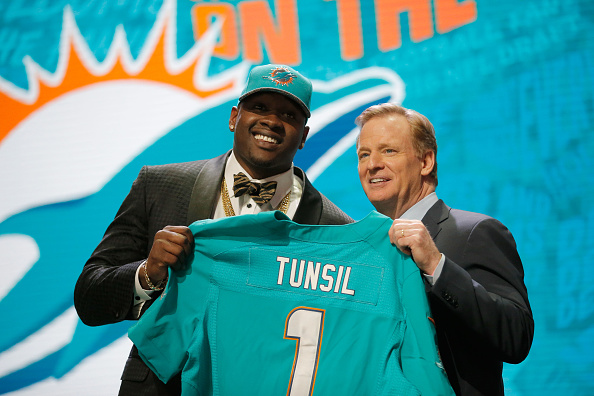 Laremy Tunsil’s NFL Draft night was as bizarre and crazy as any that a football prospect has ever had. Not only did a video of him smoking a bong through a gas mask get posted to his Twitter account as the draft was starting, but text messages of his correspondence with Ole Miss officials asking for money were then posted to his Instagram account as he was being selected.

To top off the sundae, Tunsil admitted he accepted money from Ole Miss coaches and officials during his press conference at the draft and was then hurriedly ushered off the podium, not to be heard from again. But now, this story has taken another bizarre and crazy twist.

Deadspin’s Barry Petchesky reported that someone has been trying to sell the bong video with Tunsil in it for weeks. “40 sec video of Projected top 5 pick in the 2016 NFL draft smoking drugs (crack or weed) from gas mask. Looking to sell” said an e-mail in the Deadspin tips inbox, which arrived with the subject title, “Laremy Tunsil.”

After confirming it was Tunsil in the video, Deadspin decided not to pay for the video (questionable ethics aside) because as they put it, “a college kid smoking weed is not a story at all,” nor is college football players getting money from coaches to pay the rent.

The sender went back one more time to Deadspin and after editors didn’t respond, the correspondence ended.

Tunsil does not face discipline for infamous bong rip – but his actions, even in college, can cause reference into substance abuse program.

Following the video’s release on social media, suspicion immediately centered on Tunsil’s stepfather, who is entrenched in a legal battle with Tunsil after the football player was arrested on domestic violence charges stemming from a fight between the two men. A month after Larry Miller filed charges, the two agreed not to pursue any further legal action against each other. That was until Tuesday, when Miller filed another suit against Tunsil, in which he claims Tunsil assaulted him and defamed his character. Miller was interviewed by the NCAA during its investigation of Ole Miss, as Miller may have had proof of Tunsil’s NCAA rules violations.

Whatever the reasons for Tunsil’s draft night plummet from potentially No. 3 or No. 4 to the No. 13 selection, this bizarre story involving Tunsil is likely going to evolve and expand as time goes on. We almost certainly haven’t heard the last of this.