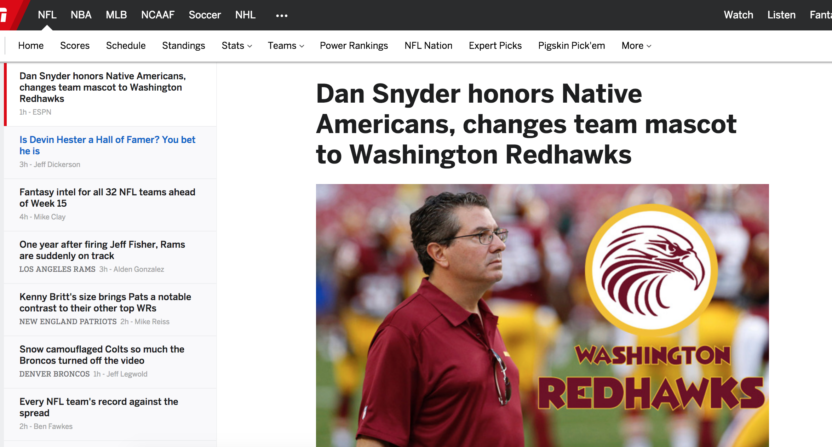 From false Adam Schefter accounts to that photo of Michael Bennett burning a flag, fake news has visited the sports world many times before. But rarely, if ever, have we seen a fake-sports-news campaign quite as elaborate or audacious as the one that came to light Wednesday.

Someone, for some reason, has created fake web sites designed to look like the Washington Post, ESPN, Bleacher Report, and Sports Illustrated and published news stories about the Washington Redskins changing their name to the Redhawks. Whoever was responsible for the stunt even created a fake Washington Redhawks website, with a fake announcement of the switch. All of the knockoff sites look uncannily like the real ones, with only subtle differences in the URLs.

UPDATE: The Washington Post reports that “an alliance of American Indian activists” was behind the stunt.

“The point of this was to start the conversation again,” said Sebastian Medina-Tayac, one of the organizers behind the stunt, in a telephone interview. “This is an issue that comes up very dramatically. People really care about it and then something else hits the news cycle or the team does some PR gymnastics and sort of squirms their way out of facing it head on. We wanted to make it immediate and urgent by allowing people to imagine a world where that mascot is gone, the name is changed and see how people react to it.”

If you were to see this Washington Post page, for example, you would have almost every reason to believe it was legitimate.

It’s tough to know for sure what the intent is here. It seems most likely that the creators are trying to gin up support for changing the Redskins’ name (which has often been decried as offensive to Native Americans), but it’s also possible the fake sites came from an name-change opponent looking to spur outrage. Or maybe someone just wanted to watch the world burn. 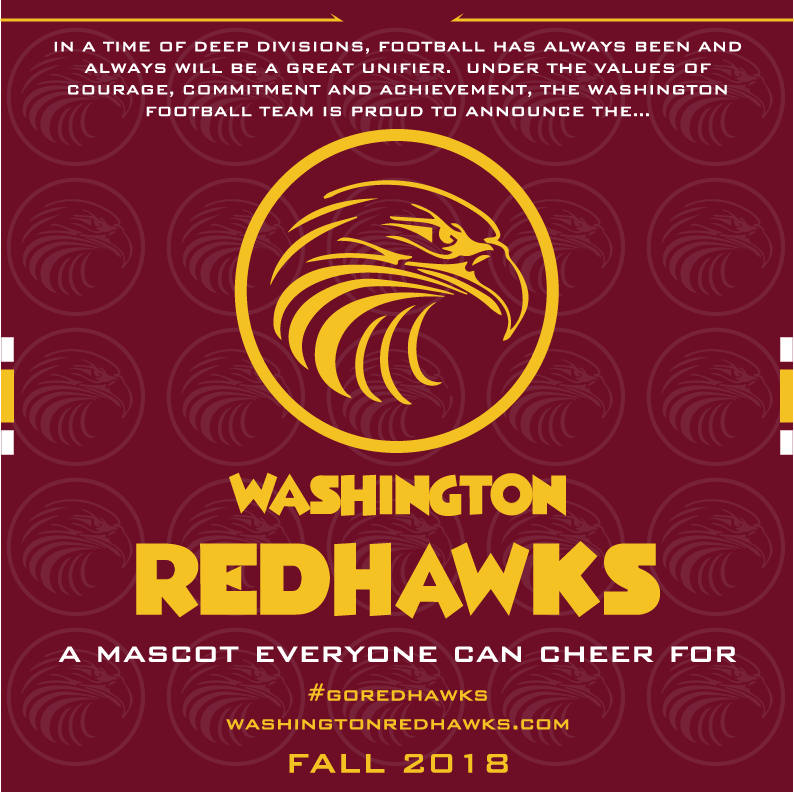 Regardless of motive, this is clearly not your average troll campaign. To create such precise replicas of at least five websites presumably required time, money and expertise. These are some serious fake-newsmen.

We’ll update this post if we learn more about who was responsible for the Redhawks stunt or what their objective is. In the meantime, check your URLs carefully.

UPDATE: The Redskins put out a statement about the hoax.

Statement from the Washington #Redskins pic.twitter.com/u3DQJFiFXi