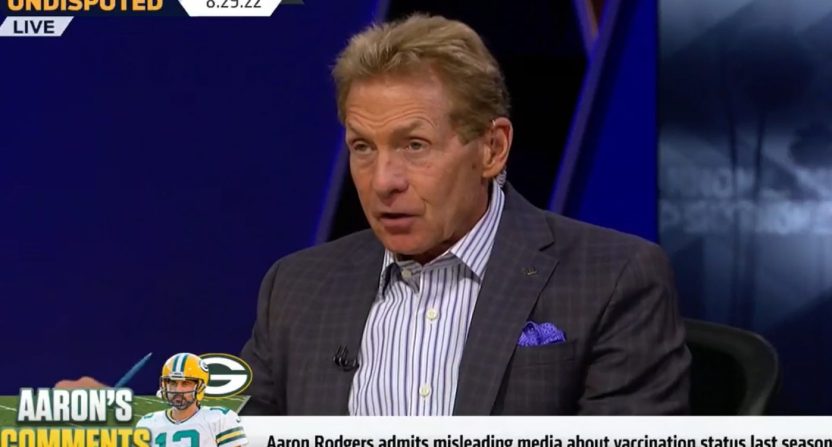 Aaron Rodgers really did it this time, drawing the ire of Skip Bayless after the quarterback admitted to having “misled” the media on Joe Rogan’s podcast.

Almost exactly one year ago, Rodgers masked the fact that he wasn’t vaccinated against COVID-19 by telling reporters he had been “immunized.” One year later, the media has repeatedly attempted to shelve the topic of Rodgers’ vaccination status, but he just can’t help himself from dusting it off like an old Ayn Rand book.

“Just let it go, Aaron! Nobody was talking about this!” said Pro Football Hall-of-Famer and Fox Sports host Shannon Sharpe. “But this is his way of saying, ‘woke mob, cancel culture.’ Man, there ain’t nobody trying to cancel you, nobody trying to take medical advice from you either.”

Nobody was talking about it until Rodgers was talking about it. Just like his fellow unvaccinated quarterbacks Carson Wentz, Kirk Cousins, and Lamar Jackson, months will pass where Aaron Rodgers’ vaccination status is a non-story. But then Rodgers goes on a bender of talking about COVID, vaccines, media, and the government, and now the world is forced to rehash the last year of misinformation spewed by the NFL quarterback.

Included in that misinformation, is Rodgers claiming the media and “cancel culture” are out to get him, while also blaming reporters for not uncovering his false “immunization” claim sooner.

“He goes back to his soulmate on this issue, Joe Rogan,” Bayless told Sharpe. “And on Joe’s podcast, The Joe Rogan Experience, he knows he’s gonna get nothing but softballs lobbed up and no cross-examination whatsoever. He even says he was ready for the media to cross-examine and he’s actually taking shots at my business, the reportorial business as in, ‘I thought they might follow up and I was ready to expand on my process if they followed up, but they didn’t follow up.’

“He’s sort of blaming the media for not asking the next question,” Bayless continued. “Well, he’s not even wearing a mask, so when he said ‘immunized’ they thought he was just trying to be the smartest guy in the room by using a term that would be high-minded, that would transcend the term vaccinated.”

Mask or no mask, the media took Rodgers at his word when he addressed his vaccination status before last season.

“Are you vaccinated? And what’s your stance on vaccinations?” a reporter asked Rodgers during an Aug. 2021 press conference, prompting the quarterback to respond with, “Yeah, I’ve been immunized.”

More important than the claim of being “immunized,” was Rodgers saying “yeah” when asked if he was vaccinated. There was no need to follow up or question the term “immunized” after Rodgers definitively answered the question with “yeah.”

Now that Skip Bayless has declared his defense of the media, maybe we can put Rodgers’ vaccination status back on the shelf, at least until his next podcast appearance.