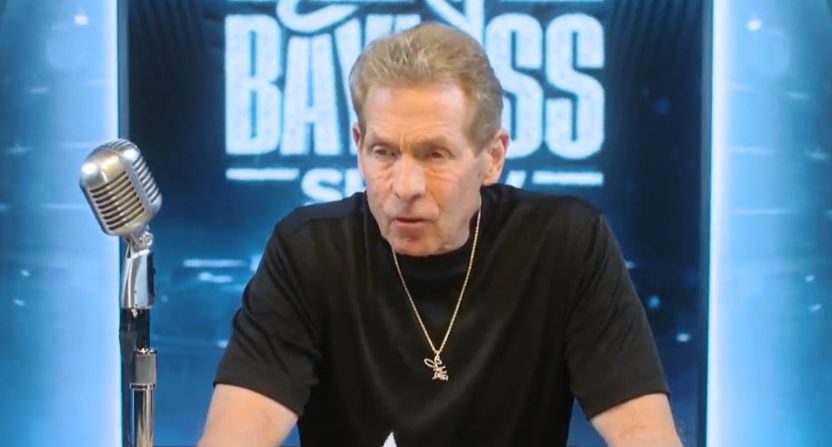 The Indianapolis Colts just hired Jeff Saturday away from ESPN to be their head coach, but will they take a chance on Skip Bayless as their GM?

On the latest episode of his Skip Bayless Show podcast, the Fox Sports host claimed that not only is he capable of being a general manager in the NFL, but he’d be better than many current football executives. And if you have any doubt in his front office ability, Bayless urges you to look at his 20 years of service spewing hot takes on TV for proof.

.@RealSkipBayless explains why he would make a good NFL GM: pic.twitter.com/ITvdwAam99

“I believe I have demonstrated over almost 20 years on live national TV, a pretty good eye and instinct for which college players can play pro football,” Bayless said. “And I believe I would be better than many current team builders at drafting and trading pro football players.”

Looking back on a few of those football predictions, it’s fun to wonder what kind of team Bayless would have built or could still build if the 70-year-old TV personality chooses to pursue an NFL front office job as a side gig.

Few people have been bigger fans of Baker Mayfield, Johnny Manziel, or Tim Tebow than Bayless. The Fox Sports host once predicted Manziel would be bigger than LeBron James in Cleveland and he repeatedly went to bat for Tebow, even claiming he was more of a sure thing at quarterback than Andrew Luck. Bayless liked Josh Freeman over Cam Newton and Matt Flynn more than Carson Palmer or Russell Wilson. He blasted the Cowboys for drafting Dak Prescott over Cardale Jones and stated Robert Griffin III would grow into a better quarterback than Aaron Rodgers.

You can argue Bayless was wrong with some of those predictions, but maybe he got all of his swings and misses out of the way before getting the opportunity to be a GM.

Bayless isn’t the first sports media personality to claim they could be a successful coach or executive without having any experience. Mike Francesa previously stated he could manage the Yankees and also once revealed he was offered a position with an NFL team in the early ‘90s, adding that both jobs would have been too big of a big pay cut for him to take. Francesa also claimed former New York Jets general manager Mike Maccagnan used to call him for advice.

Bayless and Francesa could be a perfect match because while Bayless prefers to be a GM, Francesa’s passion is coaching. It there are any NFL teams looking to clean house in the near future, the Bayless-Francesa tandem is an interesting one to ponder.