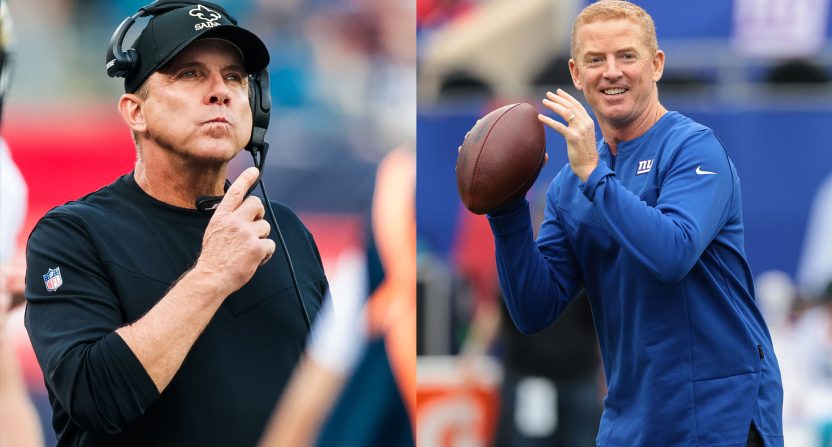 Coaches rarely quit cold turkey never to return. When they leave, they are often forced out by age, health, or job performance. Coaching is more than their livelihood, it’s their identity. Maybe they’ll take a break, but more often than not they are back on the sidelines. The lure is too great.

Sean Payton and Jason Garrett are each on a coaching hiatus and have landed cushy television gigs. Payton reportedly will spend this fall season working for Fox as an NFL studio analyst. Garrett will join NBC as an analyst for Football Night in America.

These are high-profile jobs that many would love to have. Their hirings, however, prompt questions. Are Payton and Garrett going to take their new positions seriously? Are they simply biding their time until their next coaching jobs? And perhaps most important: can viewers trust their opinions?

Most expect Payton to be coaching in 2023. Garrett may never be a head coach again, but he could land somewhere as an offensive assistant. TV networks are seemingly OK with the potential conflicts of interest. They’re in the sports entertainment business and Payton and Garrett are opinion-givers, not news breakers. But should audiences trust their opinions?

People tend to act differently when they are looking for their next job.

To be an effective analyst, there should be at least the illusion of objectivity. That a pundit will look at a situation, evaluate it, and give an honest assessment. Maybe Payton and Garrett will indeed do that but most of what they will say will be heard through a certain filter. Most people will assume they have an agenda.

Sure, ex-players turned analysts can have similar challenges and biases. However, usually, once they retire to join TV, they stay retired. The money is great, and the work isn’t physically demanding. Jason Witten was an anomaly.

Audiences might suspect Tony Romo of saying certain things because he was a Dallas Cowboys quarterback, but nobody thinks the 42-year-old is going to leave the booth to get behind center again. Coaches always have that option. Dick Vermeil famously quit TV to return to coaching after a 15-year hiatus to coach the St. Louis Rams to a Super Bowl victory. Jon Gruden, after almost a decade of rumors attaching him to college and pro jobs, left ESPN to come back to the Raiders.

Payton and Garrett might have good reasons for using TV as a pit stop. It’s a way to stay involved in the game while keeping their options open. They understand the value of staying relevant by using a powerful visual medium.

TV has a way of polishing and enhancing your appeal. When you’re an out-of-work coach, there are few better ways to present yourself to future employers than routinely appearing in front of millions. NFL owners get seduced by that. Payton and Garrett will only seem more desirable after the 2022 season.

Payton will be the most sought-after available coach next year. He led the New Orleans Saints to a Super Bowl in 2009 and surprised everyone by resigning in January. There was a report that the Miami Dolphins were poised to hire Payton with a $100 million contract. That deal was reportedly thwarted when former Miami coach Brian Flores filed a discrimination lawsuit against the team.

Payton first rose to prominence when he was the Dallas Cowboys offensive coordinator (2003-05) under Bill Parcells. He parlayed that job into becoming the Saints coach. Given his history with Dallas, you have to figure that Cowboys owner Jerry Jones would be more than willing to fire Mike McCarthy and replace him with Payton.

Most viewers know that, and any opinions Payton has about the Cowboys have to be taken with a grain of salt.

That brings us to another former Dallas employee. Garrett was a longtime head coach there until he was fired in 2019. He was hired by the New York Giants to be their offensive coordinator in 2020, but was let go this past November. Garrett was the fall guy for an offense that was hurt by injuries, and he might be desperate to redeem himself. After a year doing TV, he could be a valuable member of someone’s staff.

Garrett was notoriously boring as a coach. It’s hard to believe he will be insightful as an analyst, especially one who might be looking for his next NFL job.

When you’re watching this fall, it’s perfectly understandable to be wary of what Payton and Garrett are saying. They’ve earned your skepticism.