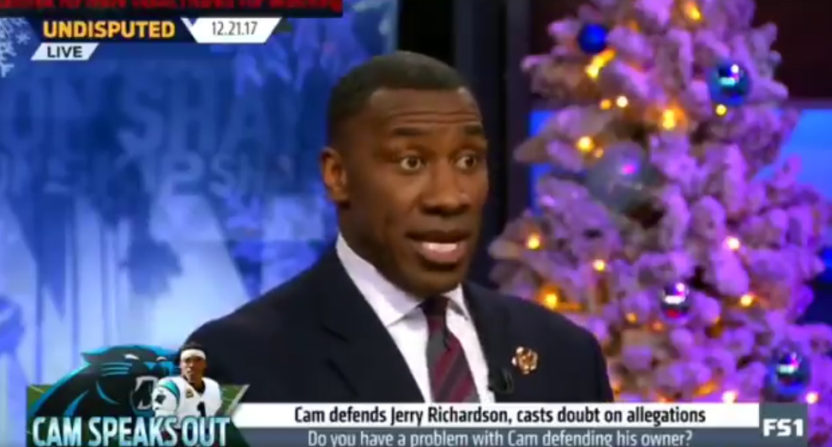 FS1’s Undisputed has produced plenty of hot takes over the last year or so, especially from Skip Bayless, but it’s co-host Shannon Sharpe who’s making headlines for what he said Thursday.

While discussing Carolina Panthers’ owner Jerry Richardson’s announced plans to sell the team following workplace allegations including sexual misconduct and usage of a racial slur, and Panthers’ quarterback Cam Newton (who is black) defending Richardson and saying “Everything that I heard were allegations and nothing was actually proven,” Sharpe brought up slavery and the disparate treatment of house and field slaves.

Sharpe pointed out that Richardson didn’t defend Newton when Newton lost an endorsement deal over sexist comments and that Newton received better treatment than other Panthers’ players thanks to his status as a first-round pick:

I think you are trying to hard to be mr “for the culture” @ShannonSharpe smh pic.twitter.com/mDPvK2Rl8W

“Did Mr. Richardson not hear about this? Why didn’t he come to his defense? Skip, this goes back way back when. Because Cam, he’s a first-round pick making a lot of money. Back in the day, the house and the field were treated differently. The blacks that worked in the house, when the white man, the master, got sick, we sick. We sick! He sick! But he couldn’t see that! Cam looking at it like… I get it. Harriet Tubman, someone said, “Ms. Tubman, you freed a lot of slaves,’ she said ‘I’d have freed a lot more had they known they were slaves.'”

“But see, the mentality that Cam has. Cam, speak for you, speak for your relationship with him. But to discredit these victims, because we know three because there were settlements…now, moving forward, this is what I want you to think about, Cam. This story, a little bit of this story, started surfacing Friday. Sunday night, the man that’s owned this team for over 20 years is going to put it up at the end of the year over allegations. Won’t you think about that? Over allegations, a man is going to sell something that’s his pride.”

“That’s why we know about Mr. Richardson. A lot of people that follow football know that he played for the Colts, that he’s old-school, that he took the money he made as a football player, invested it and became very wealthy. Skip, over allegations that surfaced Friday, he put the team up less than 48 hours later. Over allegations! Most people, when you say allegations, I’m going to fight it.”

But making a slavery analogy here is highly controversial, and has already drawn backlash for Sharpe:

Shannon Sharpe comparing NFL Players to Africans in slaver is utterly disrespectful to Africans who suffered.

Mr Richardson settled 3 sexual harassment and a racial lawsuit that as owner of Panthers we know of. Not ALLEGEDLY, FACT. Cam lost an endorsement for his interaction with female reporter. Where was Mr Richardson’s support for Cam. https://t.co/FIynC5G0KL

I’m going to say this and be done with YOU and this topic. Who I date has nothing to do with what Mr Richardson has done or Cam’s defense of it. I’m against WRONG ppl . Enjoy your day. https://t.co/4SwQE0dBGG

@ShannonSharpe I didn’t know so many people cared about who you date. Was up with em unc sharpe

Distract from the truth https://t.co/bKmbuIGQ87

@DLive87 this is also a part of the frustration of how we as a people tend to ride out for people who never really ride out for us! https://t.co/VdlYlLiBBo

Exactly. Have no doubt Mr Richardson treats his players gr8 but doesn’t changed the fact he settled these “Allegations” https://t.co/v5oPkznqxu

We’ll see if there are any further developments here, and if Newton decides to weigh in. But Sharpe’s comments have certainly spawned some controversy, which is what FS1 wanted when they put him opposite Bayless.