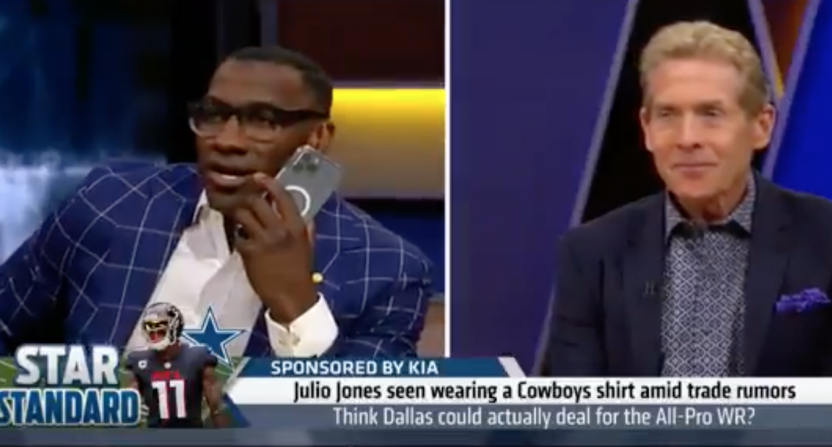 NFL players, along with other athletes and celebrities whose numbers Shannon Sharpe has on his phone should probably be suspicious if the FS1 personality calls between 9:30 a.m. noon ET. There’s a chance your conversation might be on the air.

Atlanta Falcons receiver Julio Jones has been the frequent subject of trade rumors during the NFL offseason. The Falcons have reportedly been looking to make a deal to clear $15 million in salary cap space. But either the idea of playing for another team appeals to Jones or he’s just ready to leave if he’s not wanted.

Jones being photographed wearing a Dallas Cowboys hoodie over the weekend threw a match on the trade rumors gasoline puddle. Did the 10-year pro make it clear where exactly he wants to go if the Falcons deal him?

That was a topic of discussion for Skip Bayless and Shannon Sharpe on FS1’s Undisputed late Monday morning. Naturally, Bayless is interested in any star player being traded to the Cowboys. But rather than speculate, Sharpe decided he’d go straight to the source and called Jones while on the air.

Shannon Sharpe calls Julio Jones live on the air to ask him about possibly being traded to the Cowboys: pic.twitter.com/kIUruuLX4X

That’s pretty funny, right? Sharpe and moderator Jenny Taft certainly thought so. It was a spontaneous decision that could result in some good television.

Calling up Jones to ask him about being traded ended up being even better TV than Sharpe and Undisputed might have guessed when the receiver gave a candid answer — which could be heard on the air.

"Oh no, I'm outta there man." – Julio Jones to Shannon Sharpe on playing for the Falcons, while on speakerphone on national television ….. pic.twitter.com/t86PgAOqS9

However, as entertaining as this was, it calls into question whether Sharpe violated journalistic ethics by broadcasting the call on the air. Did Jones know his response was on live TV? (Taft pointed out that he should be reminded of that.) The Big Lead’s Kyle Koster was among those wondering about that on Twitter.

Hypothetically, how bad of an ethical breach is it to call someone on-air without telling them they are on-air? Seems pretty bad to me.

It seems like that may have occurred to Jones after saying he was “outta” Atlanta. He didn’t say which team he preferred to go to and didn’t take Sharpe’s bait on saying he wanted to be traded to the Cowboys.

Legal analysts and experts may weigh in — at least on TV or Twitter — as to whether there was any sort of violation here. Was this “recording” a call, something that would require consent from both parties in the state of California? (Undisputed broadcasts from Los Angeles.) If so, it’s unlikely Jones would press charges, right?

Or was this essentially eavesdropping — with a national TV audience in earshot — with Sharpe looking bad because he broke the confidence of what was presumably a private call? Maybe this is something the two will laugh about later. Or maybe Jones won’t be taking Sharpe’s calls in the future. (Bayless or Taft should ask him about that in the coming weeks!)

From a football standpoint, Jones going to the Cowboys probably isn’t feasible. Dallas doesn’t have enough salary cap space to add Jones after signing quarterback Dak Prescott to a new contract and will have to make cuts to accommodate rookie salaries. But the depth chart at receiver is full too, topped by Amari Cooper, Michael Gallup, and CeeDee Lamb.