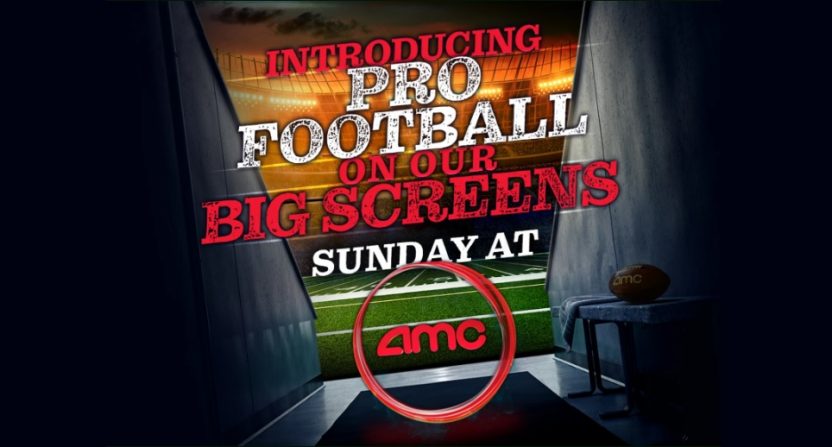 Football fans who want to watch the NFL in public now have yet another option, and this one will (in theory, at least) be cheaper than a sports bar.

AMC has announced that select theaters across the country will be airing select NFL games this season. Tickets for the screenings are free, but not really, since you need to buy a $10 prepaid food and beverage credit (which would be good for, if my math is correct, a child size popcorn and a shot of Diet Coke). You need to be an AMC Stubs member to be eligible, but memberships are free, and admission is granted using tickets available on the Stubs app on your phone.

Find a participating pilot theatre below and score your seat now at no charge with the purchase of $10 Prepaid Event Food & Beverage on our site, our app, or with a crew member at the theatre. If you’re not an AMC Stubs member, join now!

Score your seats for the game and access your AMC Stubs card with ease on the AMC Theatres app. Turn on push notifications in your system preferences to get notified as soon as tickets are available each week.

And now, the caveats.

Local games are *not* included. Wichita by EB reports that this is because of an NFL rights issue (shock of all shocks).

Unfortunately, local team games are not available to AMC due to the rights of local broadcast affiliates. Only select games outside the local market will be available based on professional football broadcast rules.

Games also vary by location, and it seems like the theaters included will only be airing up to three games. Also, when there are multiple participating theaters in one market, the games shown in each theater may be different. For example, the two participating Philadelphia area theaters are showing five different games, with the Titans-Browns tilt on CBS as the only game available in both theaters.

The “no local teams!” rule doesn’t just apply to teams playing in the local market, either: it applies to teams airing on CBS and Fox in the local markets. For instance, in the Chicago market this week, the three Sunday (non-primetime) games are Tennessee-Cleveland, Atlanta-Minnesota, and New York-Dallas, and none are among the eight games airing in five different Chicago theaters. That Giants-Cowboys game is airing in most national markets across the country, and is only in theaters in markets where the game is not airing (Detroit, Oakland, Phoenix, Tampa, to name four).

At the very least, this is an interesting alternative to going to a sports bar, focusing on one screen out of dozens, and hearing fans cheering other games. And really, it’s somewhat of an untapped market for AMC, which could siphon fans away from bars to watch games that they couldn’t watch at home.