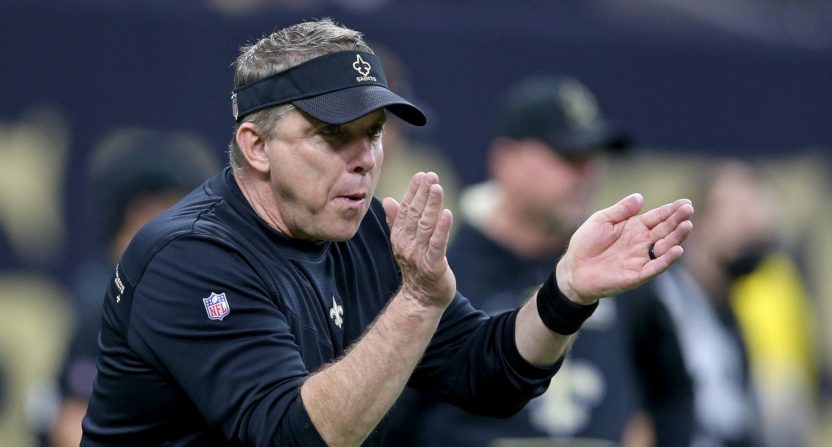 A big part of the discussion about Sean Payton leaving his role as head coach of the New Orleans Saints has been about how he might head to television. That discussion started weeks ago, before it was even clear that Payton (seen above during a Jan. 2 game) was leaving the Saints, with ESPN’s Jeremy Fowler predicting (citing various anonymous sources) that Payton (and also possibly Pete Carroll and Sean McVay) would get discussion for TV jobs, and with Front Office Sports’ Michael McCarthy then reporting last week that Payton would be “at the top” of Fox’s list for their top booth if Troy Aikman did in fact leave them for Amazon. Well, Payton addressed the TV discussion in a press conference Tuesday, and said he would be interested in that but hasn’t yet heard from anyone. (And, as AA’s Ben Koo notes in the below tweet, it seems like a good time for that interest given Amazon building their booth, Fox potentially needing an Aikman replacement, and Brian Griese’s Monday Night Football contract also reportedly expiring):

Drew Brees not wowing in his first playoff game with NBC.

Sean Payton sure picked a good time to not so subtly hint at his interest in becoming an announcer. pic.twitter.com/1qtTh4ycfc

A transcription of that (and the seconds just before it):

“I don’t know what’s next. And look, I haven’t spoken to anyone from a media outlet relative to doing television or radio. Maybe that opportunity arises. But every time I read something that’s like ‘He’s in line for this job,’ I call my agent Don [Yee] and say ‘Don, have you heard something, cause I have not heard anything?’ And that’s okay. I think I’d like to do that, I think I’d be pretty good at it.”

There certainly are potential opportunities for Payton, and he likely would be pretty good in a media role. Networks have often been interested in figures from the offensive side of the ball, and Payton has been famed for his offenses for the last couple of decades. Payton’s also proven to be willing to speak his mind and criticize the league and opponents at times, even when that gets him fined. And he’s certainly famous; he has a Super Bowl ring, he’s led a consistently competitive team, and he’s even featured in an upcoming movie (albeit played by Kevin James). So it’s understandable that there would be media interest in him if he’s open to that role.

(And yes, Payton did receive a year’s suspension around Bountygate, as that movie explores. But there hasn’t exactly been a lot of recent public anger at him over that, with many more upset at the actions of defensive coordinator Gregg Williams and at the NFL’s overall handling of the situation. So while hiring him might lead to some blowback for a network, it doesn’t feel, at least from here, like that will significantly hurt his chances of getting a media job.)

If Payton does head to the media world, exactly where he might land definitely isn’t certain yet. There’s the McCarthy report that he would top Fox’s list as an Aikman replacement if Aikman leaves, but Aikman hasn’t left yet. There’s the discussion of him winding up at ESPN, maybe in particular if they don’t bring back Griese. But the current MNF booth of Steve Levy, Griese and Louis Riddick has seemed to draw much less criticism than any MNF booth in a while (possibly helped by a lot of people who are sometimes broadcast booth critics watching the ManningCast alternate feed instead), so it’s not clear that ESPN will look to make a change.

There are a few other things to consider here. Andrew Marchand of The New York Post reports that ESPN is “contemplating a pursuit” of Al Michaels, and bringing in Michaels might see him teamed with someone like Payton. ESPN also will have more games next year under the NFL’s new TV deals, so it’s possible they wind up building an actual second NFL booth instead of bringing in the college team of Chris Fowler and Kirk Herbstreit, and that could provide a way for them to both bring back Griese and add Payton. Also, with ESPN, there’s always the chance of shifting a game analyst over to the studio side, as they have so much studio content to fill.

Marchand also notes that his Fox sources are singing a different tune than McCarthy’s report about Fox wanting Payton to replace Aikman. He writes ” As for Payton, Fox could have interest in him, but its initial thought is more likely as a studio analyst than on top games, according to sources.” It’s unclear where there would be a studio vacancy there; perhaps Payton would be a fifth analyst on Fox NFL Sunday, or perhaps someone else there leaves. But it’s worth noting that there’s now reported Fox studio interest in Payton too. And while CBS, NBC, and Amazon haven’t yet been mentioned around Payton, they might wind up with some interest in him also.

But one challenge with hiring Payton to a top media role, especially on a top game broadcast team, is that he may not stay in that role for long. A lot of the discussion around Payton has been about him eventually coaching another team, and about this not being that long of a “retirement.” He just turned 58, so it’s quite easy to see him returning to a NFL head coaching role after a year or two in the media world, possibly with the Cowboys. (Bruce Arians made the move back to NFL coaching after one year with CBS, and he was 67 at the time.) There would have to be compensation for the Saints (considering that Payton’s contract with them ran through 2024), as there was for the Cardinals when Arians returned to coach the Bucs, but it seems like that could happen. And Payton’s later comments in this press conference sure make it seem like he’s not done coaching:

Two most tempting words in the sports dictionary: “…right now.”pic.twitter.com/Ocdsr4PkMb

“I still have a vision for doing things in football. And I’ll be honest with you, that might be coaching again at some point. I don’t think it’s this year, I think maybe in the future, but that’s not where my heart is right now. It’s not at all.”

To Payton’s credit, at least he’s being upfront about that. That’s a lot better than the many, many times we hear coaches say they won’t do something before then doing it. But that does pose at least somewhat of a challenge for any network that brings him in in a top role. If they hire him to a lower-tier booth or to a studio job, his departure after a year or two wouldn’t be as big of a deal, but networks tend to value at least some level of continuity on the top booths. And going after Payton might not lead to that.

In any case, it certainly seems like Payton will get some sort of TV or radio job if he wants it. There’s already that reported interest from ESPN and Fox, and there might well be some other suitors. There might even be some unconventional jobs for him; if he doesn’t want the challenges that come with travelling each week to call a big game, the success of the ManningCast certainly has people looking to create imitators of the “prominent figure comments on a game from home” variety. We’ll see if Payton winds up in the media, and if so, where, and we’ll also see how long he stays there.