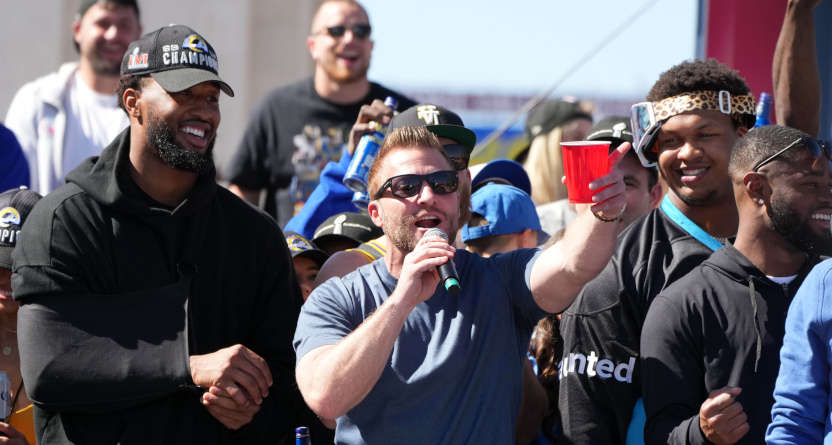 There’s been a whole lot of chatter around the idea of Los Angeles Rams coach Sean McVay heading into television recently, starting in January when he (and also Pete Carroll and Sean Payton) were mentioned as current coaches with potential broadcasting futures in a prediction column by ESPN’s Jeremy Fowler. Since then, many of the varied pieces on networks’ broadcasting moves have mentioned that McVay could jump even this offseason, and McVay talked about burnout on the Friday ahead of the Super Bowl (but then clarified to NFL Media’s Ian Rapoport the next day that he was not planning to retire after the game). And that seemed to further amp up the media reporting pieces mentioning him, especially around the carousel of other moves and possible moves with Troy Aikman, Joe Buck, Sean Payton and more. In fact, Andrew Marchand of The New York Post tweeted Thursday that Amazon might “back up a Brinks truck” for McVay.

However,  pieces from the NFL reporting side have had some more skepticism that McVay would leave right now. Both NFLN’s Peter Schrager and ESPN’s Dan Graziano said it didn’t look like a McVay move was imminent. As for McVay himself, he’s downplayed some of the TV talk, and he did seemingly provide some level of commitment to staying with a “Run it back!” chant at the Rams’ Super Bowl parade on Feb. 16 (but chants at parades should be taken with grains of salt), as seen in the top photo. And McVay’s fiancée Veronika Khomyn posted “And no…he is not retiring!” on that same day. But the most clear indication that McVay isn’t going to TV or anywhere else this offseason comes from comments he made to ESPN’s Adam Schefter Friday:

Sean McVay told ESPN today that he is not pursuing any television opportunities and he is committed to helping the Rams defend their Super-Bowl title. pic.twitter.com/0eUHzQ7Zue

The timing of this is somewhat interesting. This comes 12 days after the Super Bowl, and nine days after the parade and Khomyn’s “And no…he is not retiring!” post. If McVay had really wanted to shoot down TV speculation, he could conceivably have done this at any point in that process. So maybe the delay suggests that he did give it some consideration. And perhaps, even if he wasn’t “pursuing” TV opportunities, it wouldn’t be surprising for his agent (or someone else connected to him) to be in touch with networks about what a TV role for him might look like. But this also could be just McVay waiting and letting people talk about him (perhaps enhancing his eventual TV stock,  or the kind of contract extension he’d have to be offered to fully avoid jumping to TV), even if he was always planning to come back this year.

Update: Marchand tweeted that McVay had a meeting scheduled with Amazon for next week, and that they might have been willing to go as high as $100 million over five years. (By comparison, McVay currently makes a reported $8.5 million per year from the Rams, under an extension signed in 2019 that runs through the 2023 season.)

In any case, this does appear to be a reasonably firm statement from McVay that he’s not leaving this offseason. While Schefter isn’t relaying direct quotes, and while there’s even some wiggle room with “not pursuing” (that can still lead to a move if a network pursues hard enough themselves), the “committed to helping the Rams defend their Super Bowl title” seems more definitive. And that certainly does make it seem like McVay will again be on the sidelines for them this coming season. A TV job may still be in his future, but it doesn’t appear to be in his present.