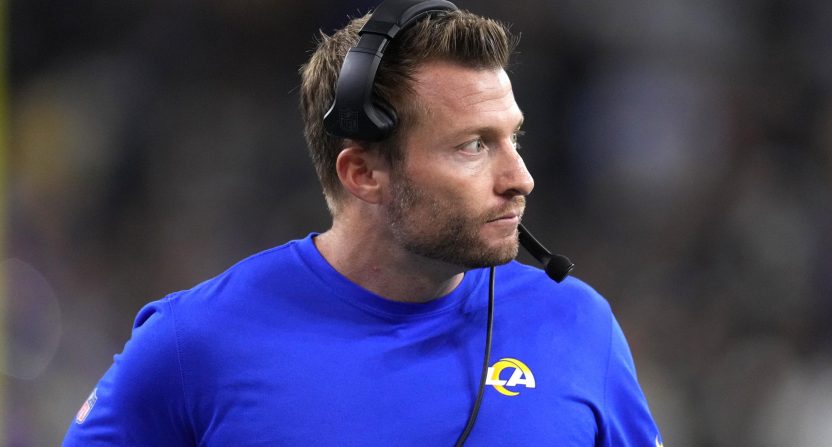 At the end of the 2021 NFL season, Sean McVay was in demand by networks looking to strengthen their NFL broadcasting lineup. The 36-year-old Super Bowl-winning coach turned down a broadcasting opportunity to remain head coach of the Los Angeles Rams.

According to Michael McCarthy of Front Office Sports, the NFL’s TV partners are reportedly looking at McVay in either a game or studio analyst role starting in the 2023 season.

A source told McCarthy, “The (Rams) just had an abysmal year. I don’t know how optimistic that team is about the future. It could be an ominous situation. I would expect networks to call (McVay) and gauge his interest again. I’m sure some already have.”

One year ago, McVay downplayed the possibility of a TV role, reportedly turning down a meeting with Amazon and expressing his commitment to the Rams after winning the Super Bowl. A year ago, the Rams won Super Bowl LVI over the Cincinnati Bengals, but their Super Bowl defense was derailed with a litany of injuries, especially to star players Matthew Stafford, Cooper Kupp, Van Jefferson, and Aaron Donald. Not to mention injuries to many on the offensive line. That has LA at 5-11 entering the final week of the regular season but with all the injuries, McVay may not want to leave too soon because they could bounce back. That being said, Rams players are getting older and a rebuild might be on the horizon. Is McVay willing to undergo that rebuild?

Honestly, McVay is in a pretty good situation right now. Networks view McVay so highly that, if he stays with the Rams next season, broadcasting will be there as a possibility. Even if it winds up that the Rams suffer another five-win season next year, McVay will still be in demand. And as he enters the final year of his contract, McVay could have a variety of options after 2023. From the coaching side and the TV side.