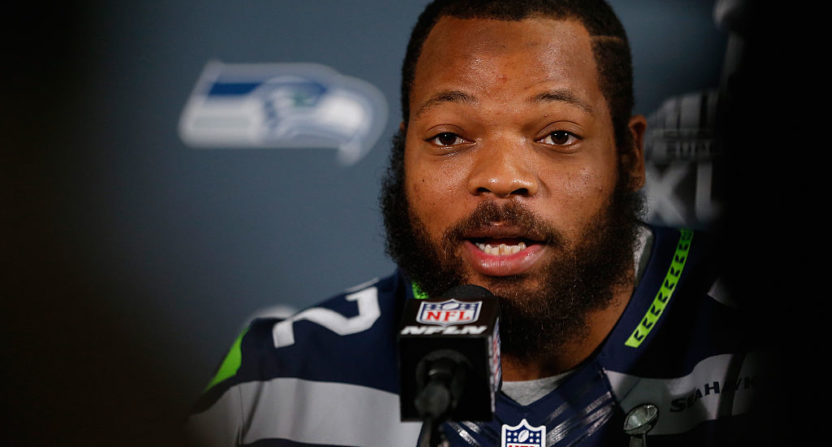 We’ve heard about players refusing to speak to their local media outlets and sometimes it lasts for a few weeks or a few months or for even years. But in the case of Seattle Seahawks defensive end Michael Bennett, he’s threatening not to speak to the Seattle Times for the rest of his career.

It all stems from a column written by Matt Calkins. Overall, the column titled “Seahawks’ Michael Bennett does great things, but why the immaturity?”, was mostly positive of Bennett citing his charity work, his play on the field and his personality. But at the end Calkins called out Bennett’s behavior at the end of the Seahawks’ playoff game against the Atlanta Falcons:

I was 10 feet away from Bennett after that playoff loss to the Falcons when he ripped into a reporter for asking a fair question about the pass rush. He called him a “non-playing (expletive)” and asked what kind of adversity he’d been through, implying that there was no way it could be on par with an NFL player.

Well, that reporter survived cancer, which Bennett obviously didn’t know. But the fact that he never apologized or even acknowledged it reeks of immaturity.

Those two paragraphs set off Bennett:

For his part, Calkins wished that Bennett hadn’t reached that point:

I'm sorry you feel this way. I actually have a lot of respect for you. https://t.co/utq4xnx3YU

In a sense, Bennett’s reaction to the story is proving Calkins’ point about immaturity. It’s one thing to get angry over the column, but totally another to say “I’m never speaking to you again for the rest of my career.”

There’s no doubt about Bennett’s playing ability, but the reaction here helps to back Calkins’ contention about his lack of maturity. Perhaps someone on the Seahawks will talk to Bennett and get him to drop his personal boycott or maybe it just continues for the rest of his career.

No matter what happens, it will be interesting to see how long Bennett holds a grudge against the Seattle Times.