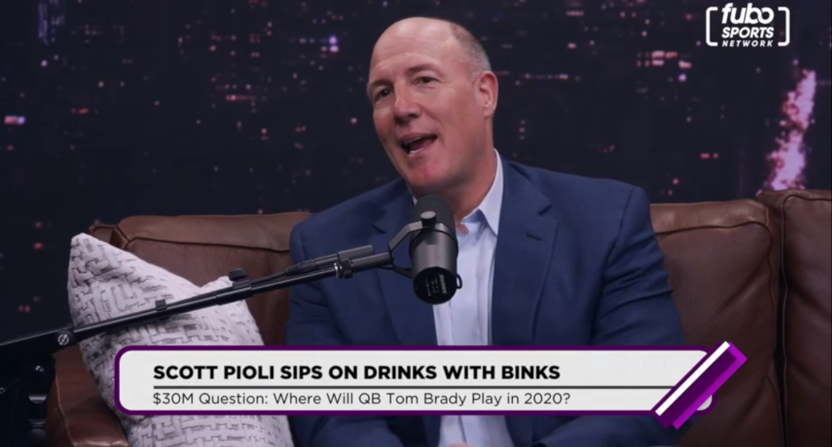 Long-time NFL personnel executive turned CBS Sports analyst Scott Pioli appears on this week’s Drinks With Binks on fubo Sports Network, and he had some interesting things to say to host Julie Stewart-Binks about the drama about Tom Brady’s impending free agency. (NFL free agency begins March 18, and it’s been reported that Brady will hit that, even if he winds up eventually signing another deal with the New England Patriots.)  Pioli worked in the Patriots’ personnel department from 2000-08, so he certainly has some history with Brady and Bill Belichick, and what’s significant about this interview is his commentary on how many media outlets overreact to everything Brady does (including a picture that wound up being a promo for a Hulu Super Bowl ad). Pioli’s comments there start around 0:40 in this clip:

“What’s going to happen with Tom? I don’t know. It’s so funny, every day I open up the internet and there’s this new story, and I’m watching how many people are getting traction out of Tommy’s life and his story. Like when that silly picture came out.” [Stewart-Binks interjects with “It was great for Hulu.”] It was great, but it’s just so funny how every last thing is put under the microscope, and how much people want to speculate. Honestly, when I was on the other side, meaning not doing media stuff, on the football side, this was the kind of stuff that drove me crazy when you’re with a club. Because, not only as an executive or a coach or an assistant coach or as a player…no matter what Tommy does, people are looking at it as ‘It’s a sign of something.’ Not everything in life is a sign of what you might be doing.”

Pioli goes on to say that he’s been in touch with Brady, but that he doesn’t know where Brady is going. But it’s the commentary on how people react to Brady’s social media posts and other material that’s particularly interesting, and the pre-Super Bowl photo really showed that; a whole lot of outlets really dove into potential implications from something that wound up being a Hulu promo. And this isn’t the first over-analysis of Brady’s life; consider how then-WEEI host Alex Reimer (now at Outsports) called Brady’s daughter “a little pissant” in 2018 based on her appearance in the Tom vs Time Facebook series, or how people got mad about his greeting kiss for his son in that show, or how the world freaked out about him cliff-jumping with his daughter last summer. It’s truly incredible how many media people want to dig into every detail of Brady’s life and either judge his decisions or suggest that some little thing indicates what he’ll do next. And Pioli’s comments here are a good look at how some of this is received by teams, players and executives, and a good reminder that not everything is a sign of what someone’s going to do.

[Fubo Sports on YouTube; this episode of Drinks With Binks with Pioli airs in full Friday at 8 p.m. ET/PT on fubosportsnetwork.com and their associated streaming apps]