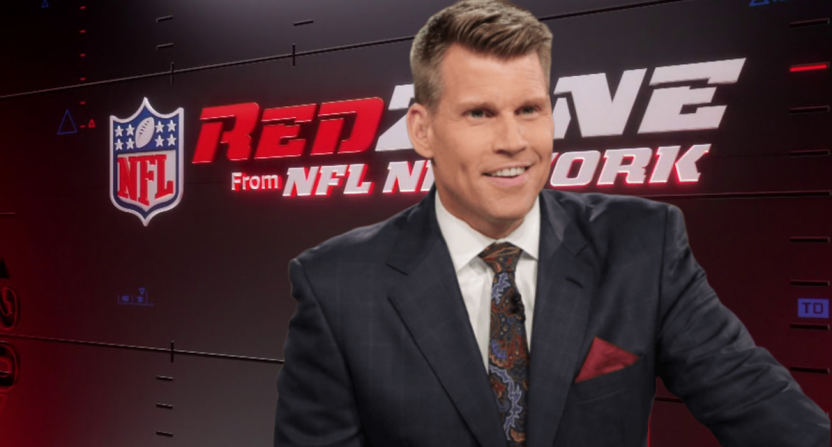 The NFL has recently been cutting back its media operations (including NFL Network, NFL RedZone, and NFL.com), but Scott Hanson isn’t going anywhere. As reported by Front Office Sports’ Michael McCarthy and A.J. Perez, the NFL RedZone host has signed a multi-year extension to continue guiding football fans through the popular Sunday whiparound broadcast.

You guys wanna watch football together for next few years?
.
Fired up to pop that #octobox / hit the #witchinghour / and call out “7 HOURS OF COMMERCIAL-FREE FOOTBALL” come @NFL Week 1. #NFLRedZone https://t.co/WxJ7gc9Msj

With the new contract, Hanson will maintain an impressive broadcasting streak that’s lasted more than 200 episodes — each spanning seven hours during a football Sunday — since the NFL RedZone channel was launched in 2009. According to McCarthy and Perez, Hanson previously had a one-year contract as the league navigated operations through the COVID-19 pandemic.

Related: NFL RedZone host Scott Hanson on broadcasting amidst COVID-19: “Everything about my experience on Sunday will be changing”

Hanson and NFL RedZone agreed to a new deal amid several cutbacks in the league’s media operations. Front Office Sports also reported that nearly 10 percent of the NFL Media workforce had been let go. Among those cuts were veteran reporter Michael Silver and analyst Mark Kriegel. Silver had been with NFL Network and NFL.com since 2013, while Kriegel began working at NFL Network in 2012.

Related: There is a clear favorite in the battle of the NFL RedZone channels

The NFL is also seeking investors in its media operations, believing that the league has taken the network as far as it can alone and needs a partner (or partners) to expand its reach and capabilities.

Goldman Sachs was recently hired by the NFL to find investment partners. Disney, Fox, and NBC have turned down the league’s overtures at various points. Sports Business Journal’s John Ourand predicts that an eventual partner will come from outside the broadcast TV industry — like a tech or sports-betting company — rather than, say, NBC, buying a stake in NFL Media.

Regardless of what changes may take place behind the scenes, however, NFL fans don’t have to worry about anything changing with a favorite Sunday companion. Scott Hanson will continue to be there with us, offering quad-boxes and octo-boxes as he guides around the league’s action, and showing great physical endurance by hosting for seven hours without a break.

Related: After further review, I’m not a fan of the Red Zone channels