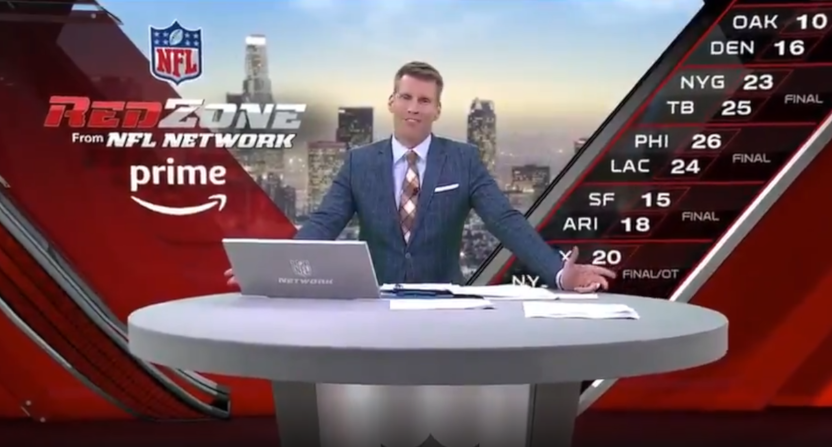 When NFL Media’s NFL RedZone starts its 12th season this Sunday, the broadcast will look similar to how it always has for viewers, but the broadcasting experience is going to be extremely different for host Scott Hanson and the rest of the team thanks to COVID-19 precautions. On a conference call with media Friday, Hanson said this year is going to be a very different one for the entire NFL RedZone team, starting with the extremely limited number of people that he’ll actually see in person Sunday.

“Everything about my experience and the NFL RedZone staff’s experience on Sunday will be changing. We’re a team, and we meet, we interface with each other. The way I envision Sunday going down with all the new protocols, I’m going to see, physically see, two, maybe three live human beings. And we have, depending on how you count it, 20 to 30 people on the NFL RedZone staff, and I would see almost all of those people live and in person and interface with them at some point. Our pre-show meeting has now been moved to a Zoom. Usually I would show up in the studio, I would go to the cafeteria to eat a breakfast which is salty with dense proteins to let me retain water…if I go to the cafeteria now, it’s going to be a to-go meal, and I’m going to be eating at the desk. …It will be limited human contact, actual human being face-to-face close proximity contact. ”

Hanson said those precautions are vital, especially considering how the RedZone team doesn’t have specific backups if someone gets sick.

“And of course, we understand that’s where we’re at now as a society, and we’re going to comply, because there are not many backups on our team. We’re not a football team that has second-string, third-string, fourth-string. If one of us goes down, should one of us unfortunately contract COVID-19 or get ill and not be able to show up to work, we either need to contract that job somehow and absorb it within the team, or we need to pull another body from somewhere else in NFL Media who can approximate that job, but has never done it on NFL RedZone before. We obviously want to avoid both of those, so social distancing, all of us being responsible, we’ve had constant conversations about that. We need to be diligent in our private lives so we can perform in our professional lives for the whole country, and for the whole world with our international audience.”

The precautions also include distributing the various RedZone staffers through multiple production rooms instead of just one, and altering the main set so Hanson’s two on-set researchers (Bryan Larrivee and Tim Guilanians) will be sitting a socially-distanced six feet from him. (he set is green-screened, though, so the alterations won’t be obvious on the broadcast. And Hanson is optimistic that these precautions won’t impact the viewing experience.\

“Hopefully what you see on the screen will be the traditional RedZone broadcast, every touchdown from every game, seven hours of commercial-free football, all the best moments. Behind the scenes, we have had to change quite a bit. …We’ve taken one control room and distributed people to, I think, four different rooms. You’re all familiar with communication being paramount in a live snappy broadcast, and we’re going to have to work through some kinks early on. But hopefully on air, the audience will get the same experience that they’re used to.”

While the RedZone team is trying to do all they can to limit the amount of face-to-face interactions around this broadcast, Hanson said it was vital to have Larrivee and Guilanians remain on set with him (albeit further away than normal), as he needs them to relay visual information that he can’t get over his earpiece.

“Because my microphone is hot very often, not all the time, but probably more than half of the show, I need information. I can get information in my earpiece, my IFB, but I’ve already got games playing in my IFB, I’ve got my producer, my director, potentially the coordinating producer already in my ear. It would be overwhelming to add more voices in my ear. So the system we’ve always developed is that my two researchers can sit there and they can maybe mouth something to me if my microphone is hot. If I didn’t see if the review in Cincinnati was overturned, they can look at me and give me a hand signal or mime something. They can communicate information to me and I can disseminate it to an audience.”

“We’ve had it happen very often where I’m told in my ear ‘Okay, Jameis Winston just threw an interception,’ and I’m like, ‘Okay,’ but I didn’t necessarily see the interception or the intercepting player. And all of a sudden they’re playing that, and they’re telling me to go; my researcher is looking up who intercepted it. And I’m telling the audience, ‘Jameis Winston on third and eight, back to pass, looks left, going for Chris Godwin, intercepted!’ And I don’t know who intercepted it as I’m saying that sentence. And all of a sudden on the computer screen, my guy can point to it because he’s sitting right next to me, and he can point to the name Stephon Gilmore. And I go ‘Intercepted by Stephon Gilmore!'”

“Now, I could probably identify Stephon Gilmore as I’m doing it live, but if it’s a lesser-known defensive back, I need that information. So it’s kind of a high-wire act in terms of the information, how I get it, how I disseminate it. And we decided that those two individuals are critical to being in close proximity, in visual sightline to me. Which is why we had to reshuffle the dynamic of the studio a little bit, move the cameras and move the set. Thankfully, we have a green screen background, so it should look the same. But it’s that type of a process that we went through to say ‘These are the two guys that I can be in reasonable proximity, social distance, to, but have line of sight to.'”

As for the game feeds themselves, they’re going to be a little different as well, with no fans in many stadiums and only limited numbers of fans in other stadiums. In the stadiums with no fans, there will be background noise provided by the league, and on the broadcasts, there will be remote audio of how fans reacted to similar past situations. Hanson relayed the details he’s heard about that setup from a call with NFL stadium operations personnel.

“Basically, most of the stadiums are going to be empty in terms of fans. Some will have a small percentage. But the stadiums that are empty, they will be projecting what they call a ‘murmur’ of crowd noise in the stadium. It’s going to be around 70 decibels. For those who aren’t familiar, anything over 100 you’re getting into that Arrowhead-loud, Seattle-loud. 70 is completely manageable; it’s not going to make anyone false start or anything like that. But for the players and everyone else in the stadium, they’re going to hear this murmur, and it doesn’t matter if they convert fourth-and-10 or if the home team offense is on the field or the away team audience is on the field. It’s going to be a constant thing.”

“The audience watching on Fox, watching on CBS, watching on NFL RedZone, will have mixed in sound from a sound mixer, basically a DJ, that will not be a Fox employee, will not be a CBS employee. It will actually be someone that the NFL has hired as a freelancer. And that person has at their disposal, sitting in a truck somewhere, isolated, a computer with authentic NFL Films sound archives. So if the Eagles are playing at home and they want the crowd singing ‘Fly Eagles Fly’ after a touchdown, they have the actual NFL Films audio of that from a game in 2018 or whenever. And this DJ will be able to mix the sound.”

“And they’ve had rehearsals, I’m told, and everything else like that to get everyone up to speed on it. They’ve apparently got a button that’s like, ‘Okay, the home team converted a third-and-10, that’s a pretty good play, this is the level of crowd noise that such-and-such a stadium produced when they converted a third-and-10 back in 2015.’ Is that crazy or what? That is pretty sophisticated; I was impressed when I had this call. So I want to be able to tell my audience that some of the crowd noise that you’re hearing will be enhanced or even artificial, but they’ve done it in a sense that for the guy sitting at home on his couch, it should sound very much the way it would outside a pandemic.”

“We’ll see how it plays. I’ve been okay with what I’ve seen in the NBA, how they’ve done theirs, and in the NHL as well. I’ll be honest, I thought I was going to hate it. And it’s kind of worked out. And we’ll see how it goes on Sunday.”

As for Hanson himself, while his Sunday routine is definitely going to be different, he said he thinks a shift to pandemic broadcasting may be easier for him than it’s been for some others, as his RedZone tenure has always seen him calling games off monitors rather than from a stadium booth.

“I think I am probably well-positioned for the new broadcasting norm. I just talked to Tony Gwynn Jr., who’s now a broadcaster out in San Diego and does some Padres games [for both TV and radio], and he was telling me what it’s like to call a baseball game from a television screen. He’s not in the press box behind home plate. But I’ve been calling football games from a wall of monitors for 11 years, going into our 12th year. I don’t think things will change for me.”

Hanson said he also hopes to bring the same level of energy he’s known for, and present the energy of the games to viewers.

“If I have a special skill or skills, one of them is being able to feel and project the enthusiasm and the energy that the competition of NFL Sunday puts before us, and that ain’t gonna change. That has been that before I hosted NFL RedZone, and before I hosted it inside a pandemic, and I don’t see it changing now that we go into the 2020 coronavirus season.”